What is an Addendum

Addendum is derived from the Latin addere which means ‘that which is to be added.’ An addendum is defined in the Oxford dictionary as “an item of additional material added at the end of a book or other publication.” However, this definition does not state how an addendum differs from an appendix. Including an addendum to a text can be defined as  a way of adding information that was unavailable at the time of writing.

An addendum contains facts that the writer would have included in the book if it had been available to him when he was writing. For example,  new information revealed  from a recent research after the book was written, but before it was published. Such information is sometimes added after the first edition or publication as we

An addendum may be included to correct something in the original work, update information or to provide an explanation for the writer’s work as well. It can be described as an afterthought and is a bit similar to a postscript.

Addendums can also be seen in legal contracts.

What is an Appendix

Appendix is derived from Latin, appendere meaning ‘hang upon‘ An appendix contains related but supplementary material to the main text. In simple terms, it provides extra information that are useful to the readers. For example, an appendix can contain an important historical document that the authors refer to in the main text, or a geographical map that helps the reader understand the concepts the author discusses. Such information is provided in the appendix because they are not central to the text and thus does not fit into the main text.  Adding this information in the text can also affect the readability and the level of complexity of a text. Thus, an appendix contains detailed information that not everyone will want to read. Appendixes are more often statistical, historical or technical.

Difference Between Addendum and Appendix

Addendum is a supplementary material attached at the end of a publication, that contains new information.

Appendix is a supplementary material attached at the end of a publication, that contains new information.

Addendum is included in a text to correct something in the original work, update information or to provide an explanation for the writer’s work.

Appendix is included in a text to provide extra information that might not interest every reader.

Addendum can contain information that was not available at the time of writing the text or corrections and updated information.

Appendix contains extra information that can be useful to the reader. 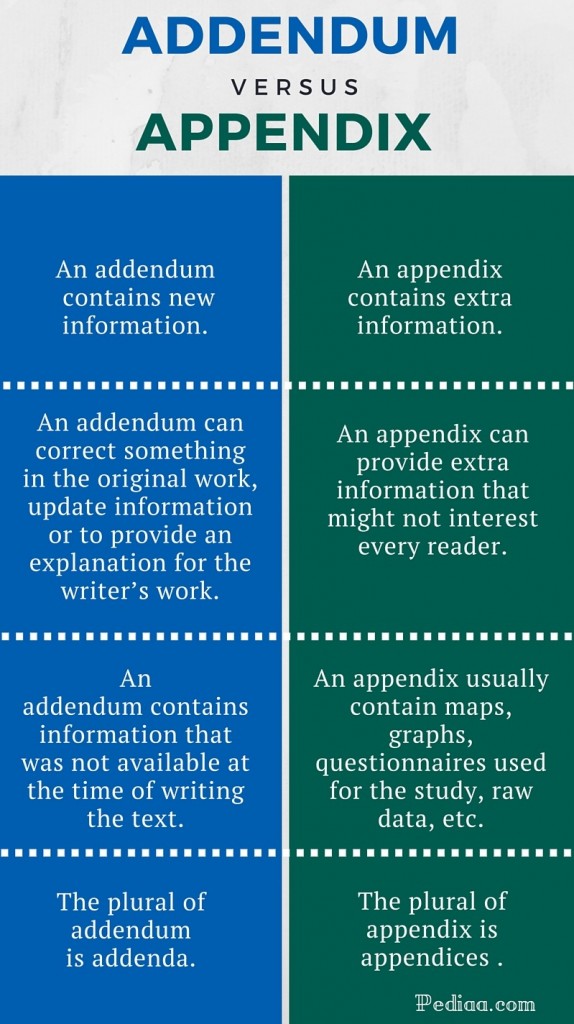