An adult Rottweiler is 22-27 inches tall and 85-140 lbs in weight. Rottweilers are one of the strongest and most powerful dog breeds in the world. They have broad heads with almond-shaped dark eyes and folded triangular ears. The body is a little longer than tall at the shoulder and covered with a rough, shiny medium length coat, which is always black with brown-colored markings on it. Their tail is very short. Rottweilers are calm and confident in nature. These dog breeds are specially developed for their strength, but not speed. Hence, they do not need a lot of exercises. Therefore, a long walk or fetching activity is recommended. Training must be started from the puppy level in order to improve their loyalty and obedience. The Rottweilers are dedicated companions to their families, and can be kept with kids. The loved ones are remembered forever and welcomed by wiggling their tails. They are not suitable to keep with other dogs. The life span of Rottweilers is approximately 8-10 years. 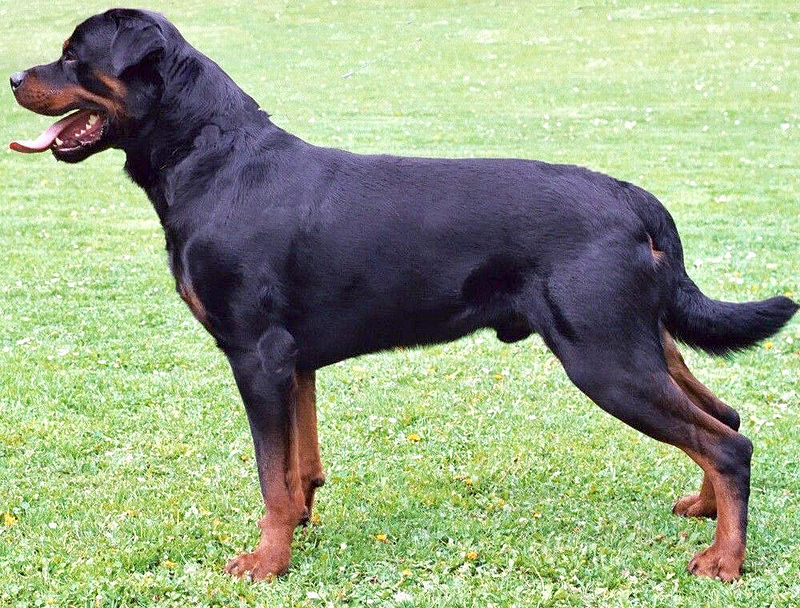 It is believed that the ancestors of German Rottweilers originally came from Rome, Italy. They arrived with the Roman army to Europe. After that, the German butchers used these dogs for herding cattle and pull their meat carts to the market. At that time, they were called ‘butcher dogs’. Later, Germans used the process called ‘selective breeding’ to breed their butcher dogs. With this breeding process, these dogs developed into the German Rottweilers, which is named after the town of Rottweil.

Difference Between American and German Rottweilers