Amylose is a linear polysaccharide where D-glucose units are joined to each other in order to form this structure. A large number of glucose molecules ranging from 300 to several thousand can participate in developing an amylose molecule. Typically, number 1 carbon atom of one glucose molecule can make a glycosidic bond with the 4th carbon atom of another glucose molecule. This is called a α-1,4-glycosidic bond and as  a result of this linkage, amylose has gained a linear structure. Also, it is a tightly packed molecule, and they don’t have any branches. Amylose is not soluble in water and thus, in plants, it is functioning as food or energy storage. It can be digested by human intestinal enzymes and during digestion it is degraded into maltose and glucose, they can be used as a source of energy.

The iodine test is used for distinguishing amylose or starch and during the test, the iodine molecules are fixed into the helical structure of amylase; as a result, it gives dark purple/blue color. Generally, amylose makes 20-30% of the structure of starch, and the rest is amylopectin. In addition, amylose is more resistant to digestion than amylopectin and is thus vital for reduction of the glycemic index value and for the formation resistant starch, which is considered to be an active prebiotic. 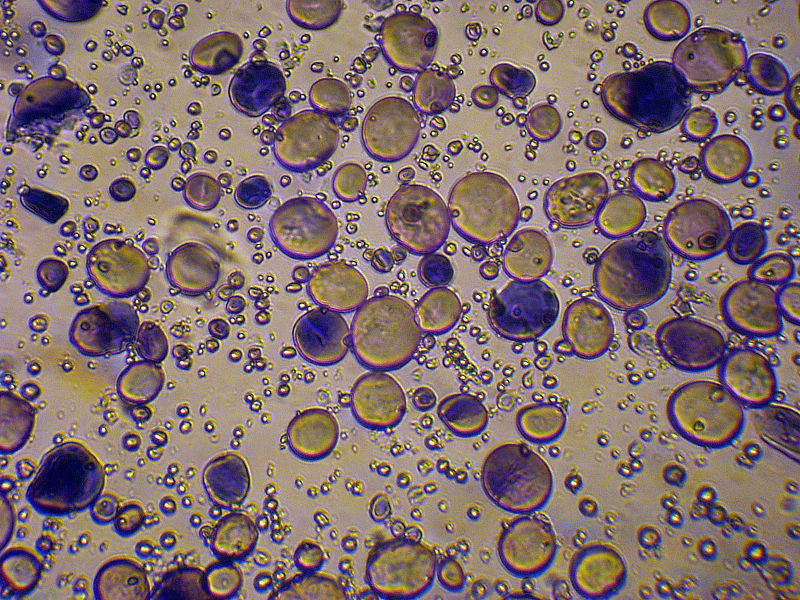 Iodine test of wheat starch, through a light microscope.

Cellulose was first revealed by the French chemist Anselme Payen in 1838 Payen isolated it from plant matter and determined its chemical formula. It is a structural polysaccharide where D-glucose units are joined to each other in order to form this structure. A large number of glucose molecules such as 3000 or more than that can participate in developing a cellulose molecule. In cellulose, glucose molecules are linked together by β (1→4) glycosidic bonds, and it does not branch. Thus, it is a straight chain polymer. Furthermore, as a result of the hydrogen bonds between glucose molecules, it can develop a very rigid structure. It is not soluble in water. It is plentiful in the cell walls of green plants and in algae and thereby giving strength, rigidity, firmness and shape to plant cells. Cellulose in the cell wall is permeable to any constituent; thus, it allow passing constituents in or/and out of the cell. Cellulose is considered as the most common and abundant carbohydrate on earth. It is also used to create paper, biofuels, and other useful byproducts. 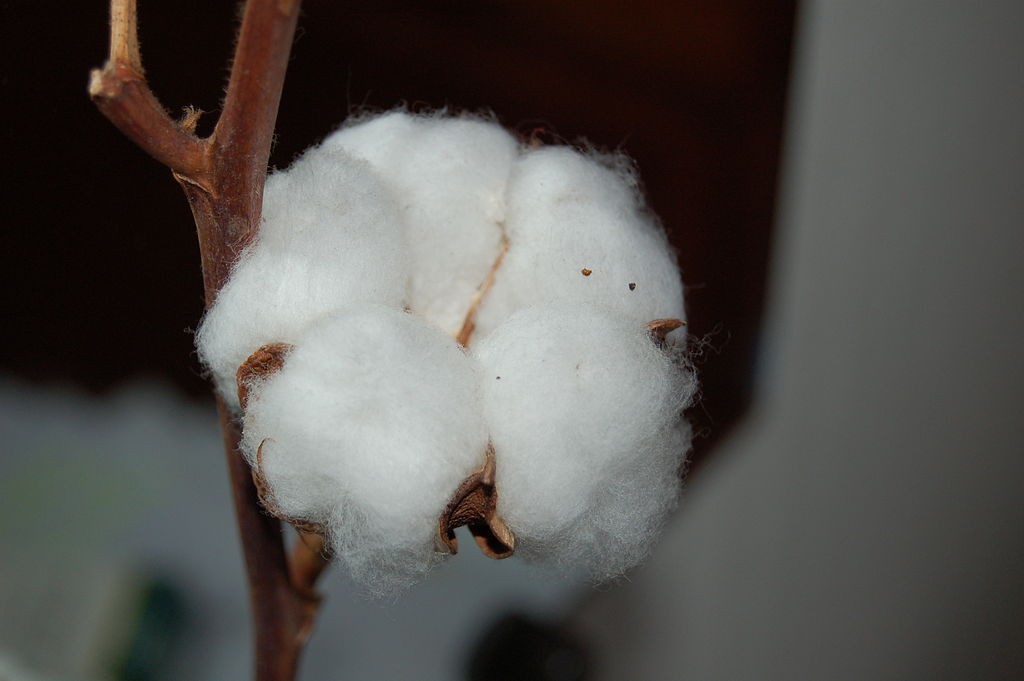 Difference Between Amylose and Cellulose

The difference between amylose and cellulose can be divided into following categories. They are;

Amylose is a linear helical carbohydrate polymer made of α-D-glucose units, and it is considered as a storage polysaccharide.

Structure and Number of Monomer Units

Amylose is a linear polymer with 300 to several thousand of repeated glucose subunits.

Cellulose is a straight chain polymer with 3000 to several thousand of repeated glucose subunits.

Amylose consists of crystalline and amorphous regions. However, amylose undergoes a crystalline to amorphous transition when heated around 60–70 °C in water such as in cooking.

Amylose does not have an exact formula, and it is variable.

Function in the Plant

Amylose is significant in plant energy storage, and it is less susceptible to digestion than amylopectin. Therefore, it is the favored starch for storage in plants. It makes up about 20-30% of the stored starch.

Cellulose is a significant structural carbohydrate of mainly in green plant cell wall. But it is also found in many forms of algae and the Oomycetes. It is the most abundant organic polymer on Earth.

The iodine test is used to identify amylose. Iodine molecules are fitting inside the helical structure of amylose and form a blue-black color complex. Qualitatively amylose can be identified using this blue-black color. To quantify the amylose content, the absorbance of the color developed can be measured using UV/VIS spectrophotometer.

Anthrone test is used to identify cellulose. Cellulose will react with anthrone in sulfuric acid, and the resulting colored compound is measured using UV/VIS spectrophotometer at a wavelength of approximately 635 nm.

Amylose is used in following industrial and food-based applications.

Cellulose is used in following in both industrial and food-based applications.

Cotton, linen, and other plant fibers production (they are the main ingredient of textiles)

It is used as a stationary phase for thin layer chromatography in the laboratory.

Amylose can be digested by humans because humans have salivary or pancreatic amylase to digest amylose.

Cellulose cannot be digested by humans because human’s intestinal tract does not produce enzymes to cleave β (1→4) glycosidic bonds. However, microorganisms in the large intestine can break down the cellulose and produce organic acids and gasses. In addition to that, cellulose acts as a dietary fiber, and it can absorb moisture inside the intestinal tract thereby preventing constipation and facilitate easy defecation. However, ruminants and termites can digest cellulose with the help of gut symbiotic micro-organisms that live in their rumen.

In conclusion, cellulose and amylose are primarily carbohydrates and considered to be most abundant polysaccharides in the world. But they have different functions in the plant due to their differences in physical and chemical properties. 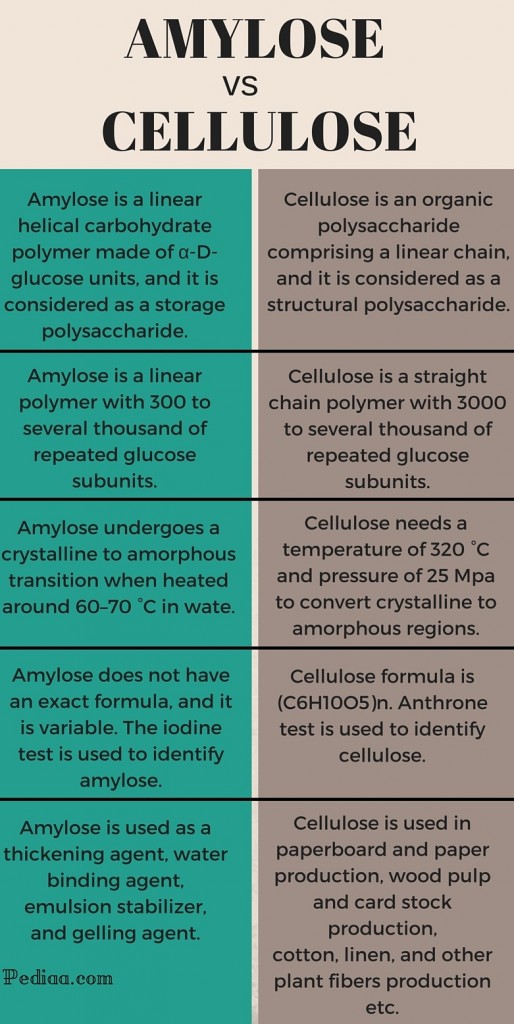 “Cotton” by KoS – Own work. (Public Domain) via Commons

“Cellulose Sessel” by NEUROtiker – Own work. (Public Domain) via Commons