In brief, analog and digital modulation are two techniques of carrier signal modification to transmit information.

Suppose you want to broadcast your music so that people from kilometres around can hear it. You might simply tune up the volume. But, that won’t serve the purpose as the sound would die off without travelling far away. Moreover, even the people who do not want to hear your music cannot avoid listening when you turn up the volume.

Instead, think of “converting” your sound wave into an electromagnetic wave and transmitting your music that way. Now, without hindering others, only the people who want to listen to the music can use a converter to convert the electromagnetic waves back into sound and listen. A problem occurs, however, when other people also start to broadcast their music. Their electromagnetic waves will interfere with yours; then, your listeners will end up with a jumble of sounds.

So how do radio stations do it? They each have a frequency, and they transmit their signals using that frequency. A person who wants to listen to a piece of music broadcasted on a particular frequency should then “tune into” that frequency using their own radio. But now there is another problem. Humans can hear sounds over a large range of frequencies. How can the radio stations transmit all those different frequencies using just one frequency? The answer is modulation.

What is Analog Modulation

In analog modulation, the carrier signal is modulated in proportion to the information signal so that it can take any value (i.e. it is an analog signal). There are three main types of analog modulation:

Amplitude modulation (AM): Here, the amplitude of the carrier wave is changed, depending on the information signal: 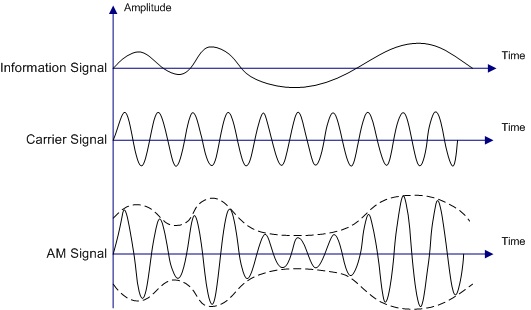 As you can see, whenever the amplitude of the information signal changes, the modulated signal’s amplitude also changes along with it.

Frequency Modulation (FM): Here, the carrier wave frequency is changed according to the information signal. 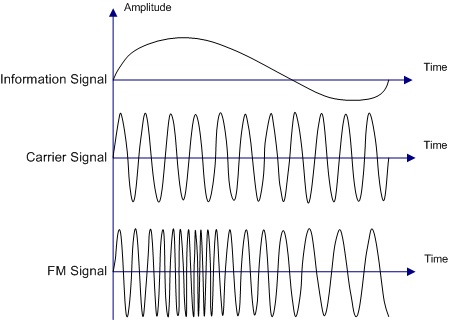 Phase Modulation (PM): Here, the phase of the carrier wave is altered according to the information signal: 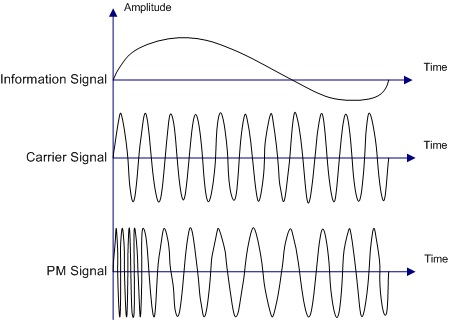 What is Digital Modulation

In digital modulation, the information signal is digital; i.e. it is a signal that can only take up specific values. Digital signals use binary codes; a series of 0’s and 1’s. The larger the number of 0’s and 1’s used to represent the signal in a given time interval, the more is the number of values that the signal could take. For instance, in our example for a radio station, the original audio signal would need to be “chopped up” into several short time intervals. An approximate “allowed” value for the signal would need to be selected for each time interval. By chopping up the signal into minimal time intervals and using many “allowed values” to represent data, the sound can be made to appear natural.

Unlike analog modulation, in digital modulation, the carrier wave is modified at specific time intervals. Since digital modulation can only transmit specified values, the information is technically not as perfect as the original version (people often refer to this as having “low fidelity” to the original signal). However, it is easier to isolate noise from digital signals. Multiplexing (sending several different signals using the same medium) is also easier when the modulation is digital.

Difference Between Analog and Digital Modulation

Analog modulation can produce a signal that carries continually changing information. But, digital modulation produces a signal whose value changes at specific intervals of time.