Anemia, in general, is a condition that occurs due to lack of Hemoglobin component in the blood. Hemoglobin is responsible for carrying oxygen around the body for the purpose of oxygenation. The standard concentration of Hemoglobin is based on the gender; for men, anemia is typically defined as a hemoglobin level of less than 13.5 gram/100 ml whereas for women, it is less than 12.0 gram/100 ml.

The major pathophysiology behind anemia includes poor intake of iron (dietary), decreased production of hemoglobin or red blood cells due to a chronic disease and increased loss or destruction of red blood cells (increased hemolysis).

Chronic blood loss is found to be the commonest cause of anemia since body’s iron stores will be used in an extensive manner to replace the on-going loss of blood mostly due to hemorrhoids, colonic carcinoma, and stomach ulcers.

There is another common classification of anemia, which is mainly based on the average volume of individual red blood cells, depicted by what is known as mean corpuscular volume (MCV).

This value is obtained by doing a complete blood count in patients with suspected anemic features .

The blood cells are produced in the bone marrow. Thus, bone marrow dysfunctions due to various malignancies like Leukemia can also lead to Anemia. In such cases, there will be a reduction of white blood cells and platelets as well, making the patient immunocompromised and increasing the risk of bleeding, making matters worse.

Most patients with chronic mild anemia are asymptomatic until a severe state occurs due to body’s compensatory mechanisms developed in order to cope up with less Hemoglobin. These patients will complain of shortness of breath, chest pain, headache, fatigue, pallor, palpitations, dizziness, hair loss, weight loss and malaise. However, the presentation will again vary with the gender, age, underlying comorbidities and general fitness of individuals.

On the other hand, patients with acute and rapid blood loss resulting in anemia will experience significant symptoms even with the least severity. This scenario is most often seen following trauma, childbirth, and surgery.

Aplastic anemia which is characterized by the reduction of all cell lines will present with fever, recurrent infections, and skin rashes.

Hemolytic anemia will have signs of Jaundice including dark colored urine, fever, and abdominal pains whereas sickle cell anemia will give rise to painful swelling of the feet and hands, fatigue, malaise and signs of jaundice.

Diagnosis of Anemia in patients with suspected clinical features is usually done by obtaining a full blood count, which will reveal a low hemoglobin level associated with one of the 3 forms of MCV counts. This will clearly indicate the type of anemia present at a glance; other tests like iron profile, serum ferritin levels, blood picture, biopsy, etc. may be needed to confirm the etiology and the fundamental pathophysiology.

Treatment for Anemia is based on the etiology. However, in general, there should be lifestyle modifications including the increased intake of dietary iron consumption of dark green leaves, pulses, beans, fish, nuts, Tofu, etc.

Patients who are not responding to conservative management will need pharmacological interventions, again depend on the cause. 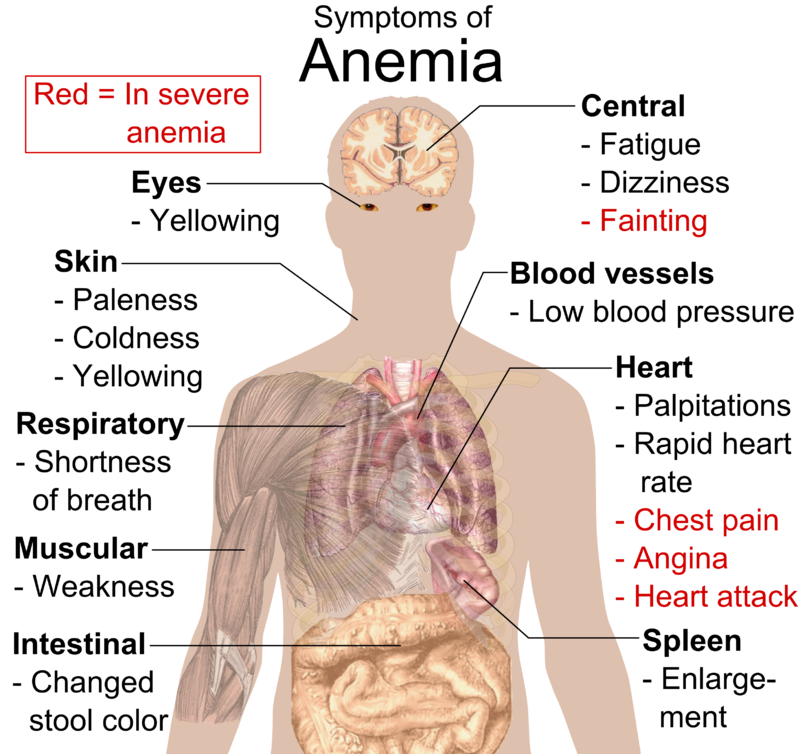 What is Iron Deficiency Anemia

Iron deficiency anemia (IDA)  is a type of Anemia that occurs due to lack of Iron component in the body, in the form of hemoglobin. This can affect a wide range of age groups from a newborn to an elderly. However, adolescents and females aged 12-49 are at a high risk for this condition due to the increased nutrition demands and heavy menstrual loss of blood respectively.

Patients will usually experience symptoms similar to what we have discussed above in anemia and signs like angular stomatitis, glossitis, and pallor.

The condition will be diagnosed with a full blood count in which the hemoglobin levels will be low associated with a reduced MCV count. In fact, IDA is a type of microcytic anemia. This can be further confirmed by doing iron studies which will reveal an increased total iron binding capacity (TIBC) and reduced serum ferritin levels. Moreover, a blood picture can be done to confirm the diagnosis further.

Increased consumption of food containing iron should be encouraged, and compounds which increased the iron absorption is important. E.g. Vitamin C.

Furthermore, substances like Tannin and Caffeine which reduces the absorption of iron should also be avoided following meals.

Iron supplementation can be given to patients with severe symptoms; it should be carried out until the iron studies become normal; it is also recommended to continue the supplementation for three more months to replenish the iron stores. 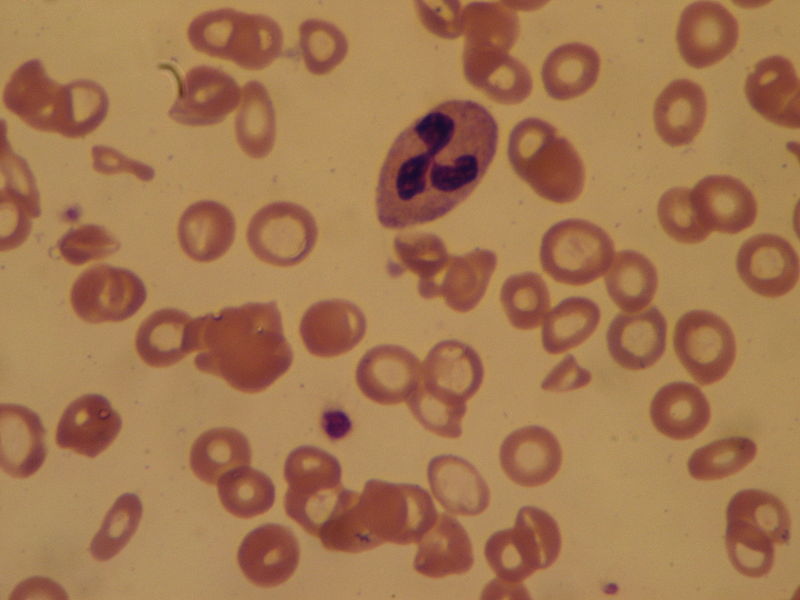 Blood smear of a patient with Iron deficiency anemia

Anemia is a condition that occurs due to lack of Hemoglobin component in the blood.

Iron deficiency anemia is a form of Anemia which is characterized by low levels of iron in Hemoglobin.

Anemia can be seen in different forms on the complete blood count (macrocytic, microcytic, normocytic), depending on the etiology.

IDA will be suspected with the presence of low MCV and Hemoglobin which can be confirmed by doing a blood picture which will show microcytic hypochromic anemia.

“AnemiaFrote” By Rjgalindo from es (CC BY-SA 3.0) via Commons Wikimedia