Both Bromine and Chlorine are chemical elements belonging to the ‘halogen’ group in the periodic table. The halogens are known for its salt producing properties. Upon the reaction with metals, halogens are able to form a wide range of salts; i.e. Sodium Chloride, Silver Bromide, etc. Also, the halogens are the only group that contains elements in all forms of matter under standard temperature and pressure: gaseous state, liquidstate and solid state. Halogens are capable of forming strong acids together with Hydrogen. These halogens are generally found in nature in the form of salts or minerals. However, the elements by themselves are considered toxic and deadly for humans. In this article, we are going to look at the two halogens, Bromine and Chlorine. The main difference between Bromine and Chlorine is that Chlorine is a yellowish-green gas under room temperature whereas Bromine is a reddish-brown liquid under room temperature.

Bromine is a heavier element than chlorine and is found right under chlorine along the column for halogens in the periodic table. It chemically labelled as ‘Br’ and has an atomic number of 35. Bromine is a rare element in the earth’s crust. However, free bromine doesn’t occur in nature and is found in the form of mineral salts. Elemental bromine when at room temperature is a smoky reddish-brown liquid which is corrosive and often toxic. Two scientists named Carl Jacob Ludwig and Antoine Jerome Balard discovered bromine as an element through independent research activities. Bromine exists as two isotopes, 79 and 81. And bromine shares similar reactive patterns like Chlorine. It is also commonly found as a diatomic molecule.

Just like Chlorine, Bromine also exists in many oxidation numbers allowing it to form a range of different compounds; bromides, hypobromites, etc. Organobromine compounds are used as fire retardants. However, these compounds have also been found to deplete the ozone layer. 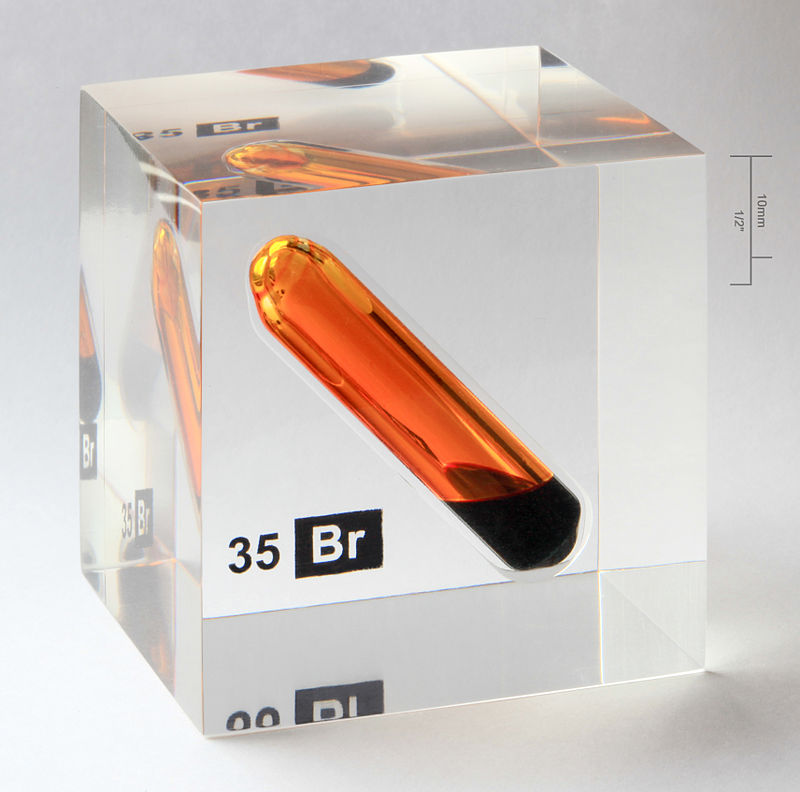 Hydrochloric acid is a primary acid which has been popular among the early chemists and also alchemists. However, Chlorine (elemental symbol ‘Cl’) was discovered as an element only after a Swedish Scientist named Carl Wilhelm Scheele, heated hydrochloric acid with manganese dioxide, and named it as ‘muriatic acid’. In fact, chlorine was called by this name for over three decades until Sir Humphry Davy re-investigated this ‘acid’ and discovered it as an actual element.

Chlorine has an atomic number of 17 and is the second lightest halogen with a relative atomic mass of about 35.5. Chlorine is a yellow-green gas under standard conditions and it exists as diatomic molecules. Chlorine conveniently forms diatomic molecules as it only needs one more electron to fill the outer atomic shell in order to achieve the noble gas electron configuration. Sodium Chloride is the most common chlorine compound and is a very common salt in nature. Due to the high electronegativity and the high electron affinity, chlorine is capable of acting as a strong oxidizing agent. This property has led to the usage of chlorine as a commercial disinfectant and a bleaching agent. It is also used for the manufacturing of industrial goods such as polyvinyl chloride for instance. Chlorine is capable of forming various compounds as it exists in 8 different oxidation states, from -1 to +7, chlorides, chlorites, hypochlorites, perchlorates, etc. Chlorine is industrially produced by the electrolysis of sodium chloride dissolved in water. Even though chlorine ions are essential for all forms of life, certain organic molecules such as chlorofluorocarbons are harmful to the environment as it depletes the ozone layer. Elemental chlorine is found to be lethal for living organisms, and a chlorine gas named ‘britholite’ was used as a weapon in World War 1 by the Germans. 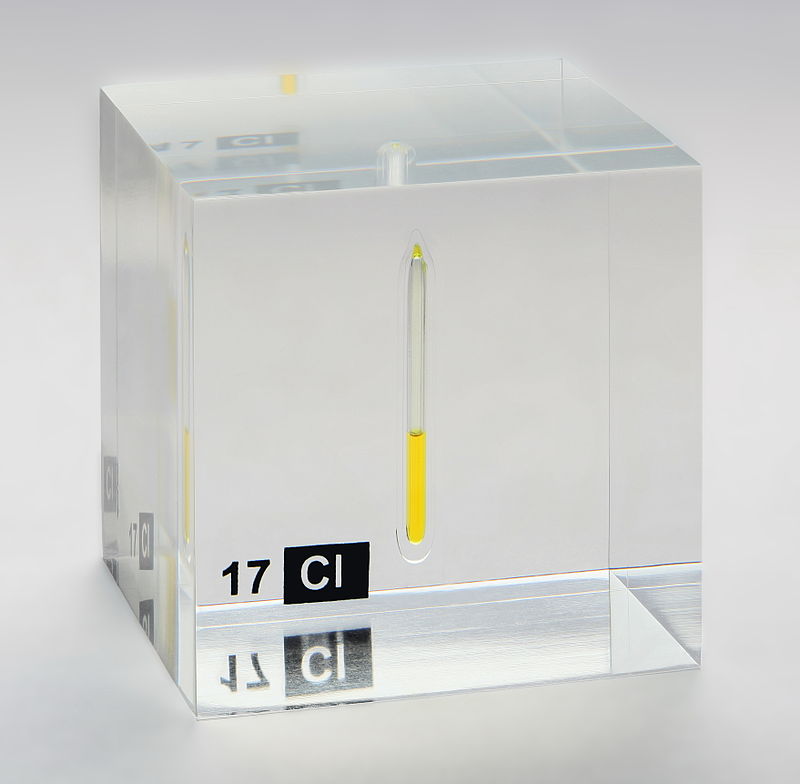 Difference Between Bromine and Chlorine

Chlorine is a halogen with the chemical symbol ‘Cl’ and an atomic number 17.

Bromine is a halogen with the chemical symbol ‘Br’ and an atomic number 35.

Chlorine is a yellowish-green gas under room temperature.

Bromine is a reddish-brown liquid under room temperature.

Chlorine is the second lightest halogen next to fluorine found in the 3rd period of the periodic table.

Bromine is heavier than chlorine and is found in the 4th period of the periodic table.

Chlorine has an electronegativity of Pauline scale 3.16.

Bromine has an electronegativity of Pauline scale 2.96. 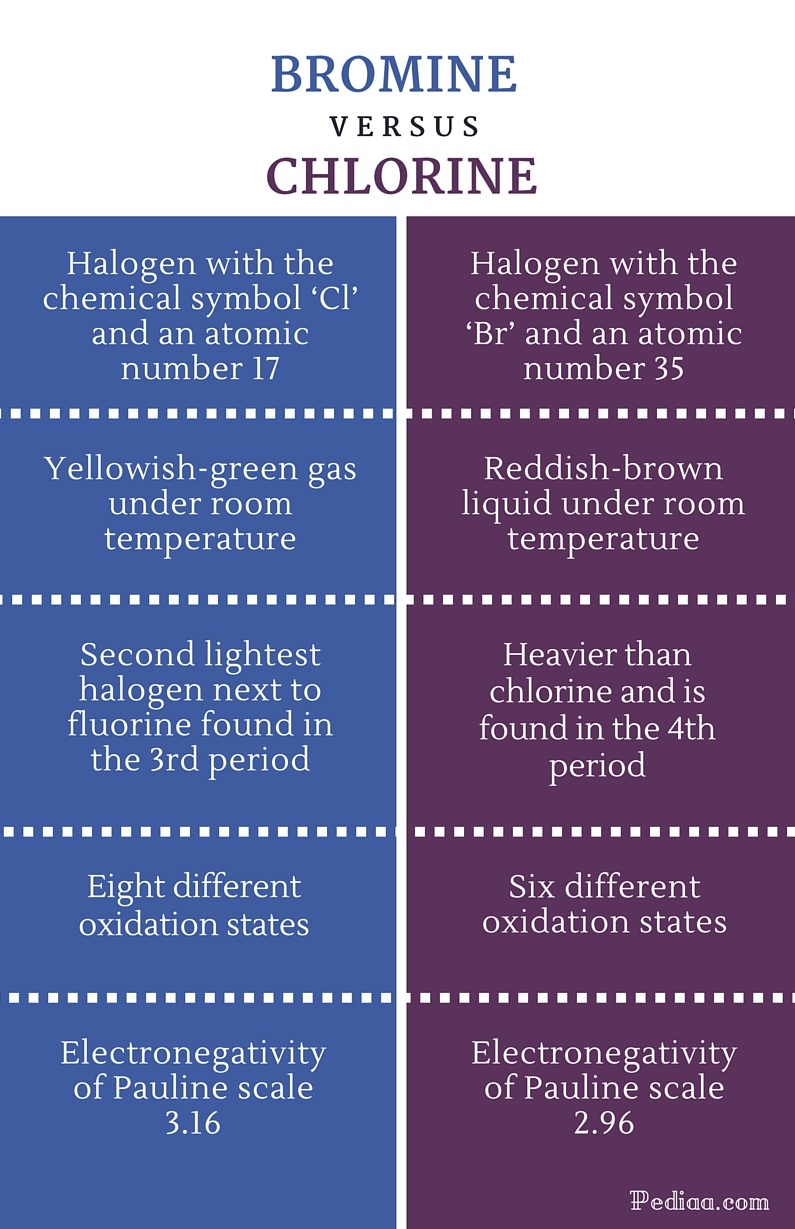 “Chlorine” By Alchemist-hp  (www.pse-mendelejew.de) – Own work (FAL) via Commons Wikimedia