Cerebral Palsy and Down Syndrome are two medical conditions occurring from birth due to various etiological factors. It is not a difficult task to identify the affected individuals at a glance; however, it is important to identify the two conditions with characteristic features owned by each of them, for the purpose of diagnosis, treatment and follow-ups. The main difference between Cerebral Palsy and Down Syndrome is that Cerebral Palsy occurs as a result of an injury to the brain before, during or after birth whereas Down syndrome occurs due to a problematic chromosomal division.

Here, we will outline,

1. What is Cerebral Palsy – Signs and Symptoms, Cause, Prognosis, Treatment Methods

2. What is Down Syndrome – Signs and Symptoms, Cause, Prognosis, Treatment Methods

3. What is the Difference Between Cerebral Palsy and Down Syndrome 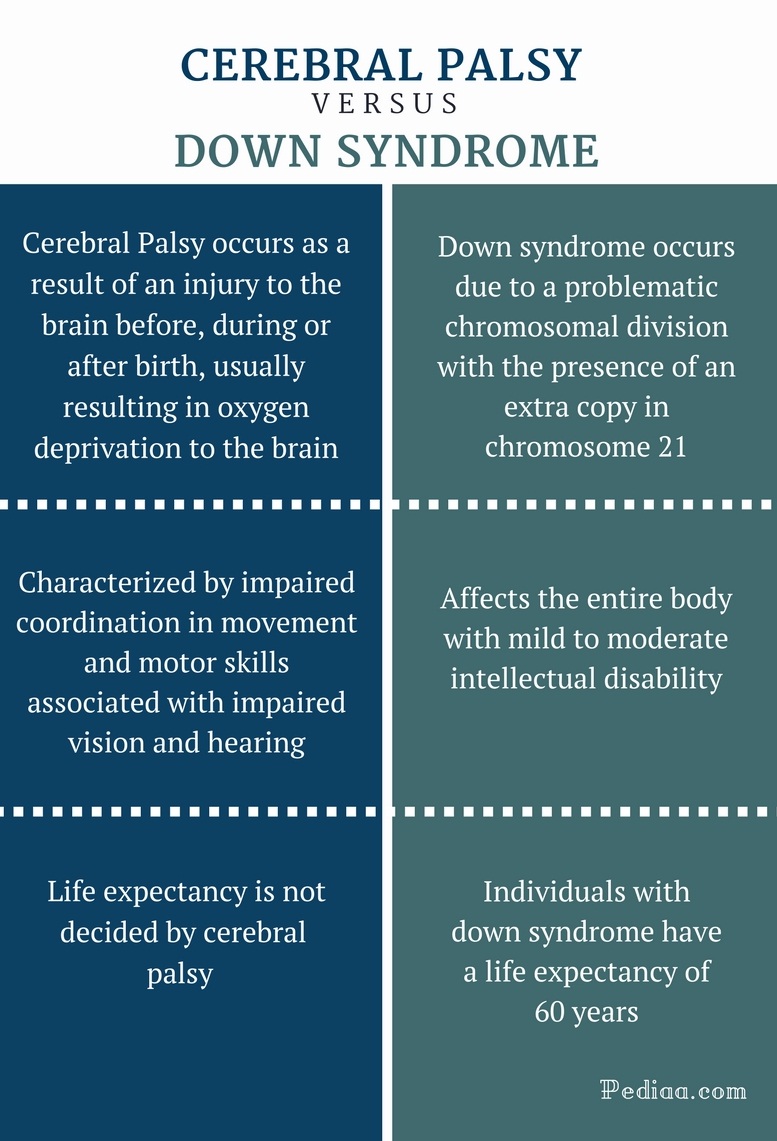 What is Cerebral Palsy

Cerebral Palsy is defined as a group of neurological disorders which usually appear during infancy or early childhood with permanent influence on body movements, coordination of muscles and balance. This condition mainly affects the part of our brain which keeps control in muscle movements.

Even though most of the affected children are born with the condition, it may not be detected until months or years after birth, especially due to the lack of awareness and screening techniques available in the modern world.

Early signs of cerebral palsy are known to appear before the age of 3 years. Lack of muscle coordination while performing movements voluntarily (ataxia), muscle tightness and exaggerated reflexes (spasticity), walking with a single foot, walking on toes or with dragging legs, crouched or scissor gait and muscle tone which is either too tight or too floppy are indications of this condition.

Even though the exact etiology of Cerebral Palsy is not known yet, a minority of affected children are thought to have undergone a brain damage due to trauma during the first few months or years of life: various infections such as bacterial meningitis, viral encephalitis or head injury from road traffic accident, fall or even from child abuse can cause this condition. However, heredity is definitely not a risk factor for increasing the chance of giving birth to a child with cerebral palsy.

As far the prognosis is concerned, cerebral palsy doesn’t get worsened over time and do not always result in major disabilities mentioned above. For most affected individuals, the disorder itself will not decide the life expectancy.

There is no permanent cure for cerebral palsy, but various methods of treatment could improve disabilities. In fact, early intervention, supportive learning techniques, medicine, and surgery are known to have a positive impact on improving muscle coordination in affected children. The treatment usually involves physical, occupational and speech therapy, anti-seizure drugs, muscle relaxants to avoid spasms and pain relief. Additionally, various surgical interventions have also been introduced to correct anatomical anomalies. Usage of braces, wheelchairs, rolling walkers and communication aids like computers with voice synthesizers may also help as supportive measures to ease the lifestyle. 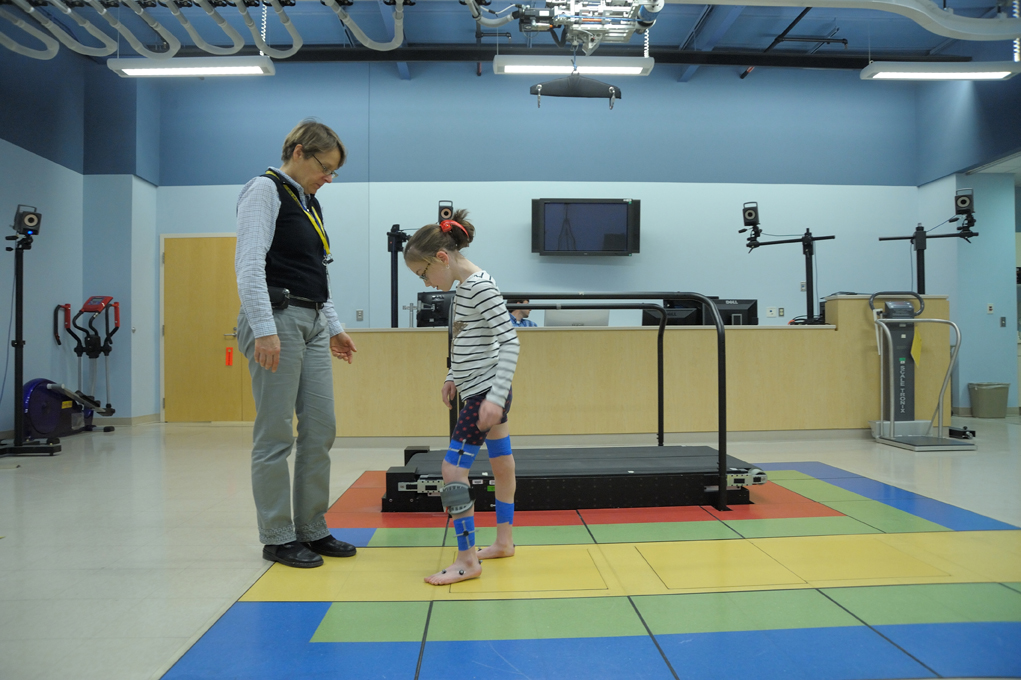 What is Down Syndrome

Down syndrome, also known as trisomy 21, is defined as a genetic disorder which is caused by the presence of whole or part of an extra copy of chromosome 21. The condition is usually associated with a delay in physical growth with characteristic facial features and mild to moderate intellectual disability. Some affected individuals can indicate severe health problems such as defects in the heart, Leukemia, dementia and sleep apnea.

Apart from the defect in the chromosomal division which can be subdivided into trisomy 21, Mosaic down syndrome, and translocation down syndrome, there are no other identified behavioral or environmental causative factors resulting in Down syndrome. However, advanced maternal age and a positive family history can increase the incidence of giving birth to a child with downs syndrome.

Pre-pregnancy genetic counseling is offered as an option to mothers with at least one child with down syndrome and according to American College of Obstetricians and Gynecologists, it is a must to offer screening and diagnostic tests for Down syndrome to all pregnant women, regardless of maternal age. These include screening methods such as blood tests measuring plasma protein-A (PAPP-A) and human chorionic gonadotropin (HCG), Ultrasound scan-nuchal translucency screening, fetal DNA analysis and diagnostic tests including Amniocentesis, Cordocentesis and Chorionic villus sampling.

After birth, the physical appearance of the baby or the test known as chromosomal karyotyping can be carried out to identify Down syndrome.

Even though there is no permanent cure for this syndrome, early interventions to prevent the associated health issues, and supportive measures can definitely improve the quality of life. Apart from medical care, there is a huge responsibility for parents to cope with child’s emotional and social disturbances while providing supportive measures to limit disabilities. 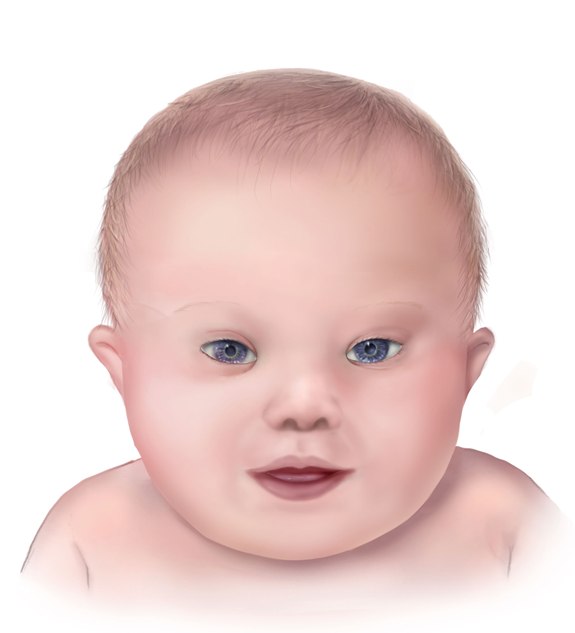 A drawing of the facial features of Down syndrome

Difference Between Cerebral Palsy and Down Syndrome

Cerebral Palsy: Cerebral Palsy is a group of neurological disorders characterized by impaired coordination in movement and motor skills associated with impaired vision and hearing.

Down Syndrome: Down syndrome is a genetic disorder that affects the entire body with mild to moderate intellectual disability.

Down Syndrome: Down syndrome occurs due to a problematic chromosomal division with the presence of an extra copy in chromosome 21, instead of two normal genes.

Cerebral Palsy: Lack of muscle coordination, muscle tightness and exaggerated reflexes (spasticity), walking with a single foot or on toes or with dragging legs, crouched or scissor gait, too tight or too floppy muscle tone. The symptoms also include fits, impaired hearing and vision, bladder and bowel incontinence and abnormal sensations.

Cerebral Palsy: Life expectancy of individuals with cerebral palsy is not unusually limited if there are no other associated health conditions

Down Syndrome: Individuals affected by down syndrome has an average life expectancy of 60 years.

“Down syndrome lg” By Centers for Disease Control and Prevention, National Center on Birth Defects and Developmental Disabilities – (Public Domain) via Commons Wikimedia