Home » Health » Drugs and Nutrients » Difference Between Citalopram and Fluoxetine

Citalopram and Fluoxetine are both antidepressants, which are used to treat depression and some other psychological disorders. The two drugs belong to the same drug class, selective serotonin reuptake inhibitors (SSRIs). These drugs increase the levels of serotonin, which is a chemical in the brain that affects mood. The two have a similar mode of action and side effects. Both Citalopram and Fluoxetine are racemates. This means there are two physical forms of the same chemical compound named as R-enantiomer or S-enantiomer.

Despite these similarities, there are some differences between Citalopram and Fluoxetine. Fluoxetine is the first SSRI to reach clinical use, but citalopram was developed years later. Citalopram is more selective in blocking the reuptake of serotonin than fluoxetine. In fact, it is the most selective SSRI.  Fluoxetine has a longer half-life, which means it stays in the body longer than citalopram. The metabolism of fluoxetine yields a very long-acting metabolite, namely norfluoxetine (half-life is up to 16 days). This is a potent reuptake inhibitor of serotonin, thus significantly contribute to the effects of the drug.  However, the active desmethyl metabolites of citalopram are weaker, and half-lives are shorter than that of norfluoxetine. Citalopram has less potential for drug interactions than fluoxetine.

Fluoxetine is a SSRI, widely used to treat depression. Moreover, it is used to treat obsessive-compulsive disorder, bulimia (an eating disorder), panic disorder and post-traumatic stress disorder. The dose varies according to the condition. Side effects include nausea, agitation, insomnia (sleeplessness), drowsiness, tremor, dry mouth and sexual dysfunction. The drug is well absorbed orally. It has a half-life of 24 to 96 hours but due to its metabolite (norfluoxetine), the effects may last longer (up to 16 days). Thus, side effects and drug interactions may persist even after the drug is stopped.  Fluoxetine is extensively metabolized by the liver and mainly excreted in urine. 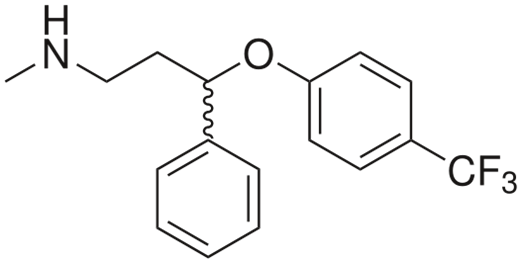 Citalopram is the most selective SSRI in clinical use. This is mainly indicated for depression. Off-label indications include obsessive-compulsive disorder, bulimia (an eating disorder) and panic disorder. It has side effects similar to fluoxetine. It is well absorbed after oral administration. The half-life is approximately 35 hours. This drug is metabolized by the liver and excreted in urine. An active S-isomer of citalopram, escitalopram is in clinical use. 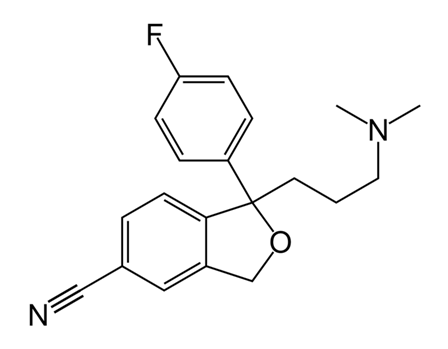 Difference Between Citalopram and Fluoxetine

Citalopram: Volume of Distribution is 12 L/kg.

Fluoxetine: Volume of Distribution is 20-45 L/Kg.

Fluoxetine: Gradual stopping is not usually necessary. This is due to the long-acting metabolite, norfluoxetine.

Fluoxetine: Fluoxetine and its metabolite norfluoxetine inhibit several CYP enzymes. Thus the drug interacts with other drugs metabolized by these liver enzymes.