Cumin and fennel are primarily cultivated for the edible seeds, and they are essentially, flavoring agents mainly found in South Asians and Western diet. They also belong to the herbal medicine group and share some similar morphological features. As a result, seeds of cumin are often referred to as fennel or vice versa by the most of the consumers in the world. But cumin and fennel are two different plants; the botanical name of cumin is Cuminum cyminum whereas the botanical name of fennel is Foeniculum vulgare. Both Cumin and Fennel belong to the Apiaceae family. The seeds of cumin are brownish in colour whereas seeds of fennel are greenish in color. They also have significantly different flavor and aroma profiles. This is the main difference between cumin and fennel.

Cumin is a flowering plant species which belongs to the carrot family. It is a perennial herb and produces feathery leaves 40 cm long yellow flowers. It is native to the east Mediterranean countries and India but has become extensively naturalized in many parts of the world. It is considered as a highly aromatic with various culinary and medicinal uses. Dried seeds are one of the most important food ingredients in Western and Asian cooking, and it is also used as a food dish garnish. These seeds are used in both whole and ground form. 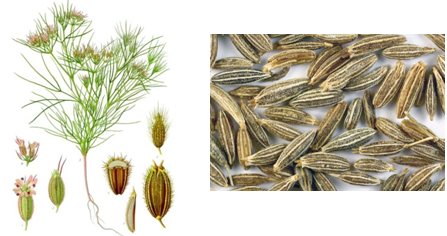 Fennel is a flowering plant in the family of carrot (Apiaceae family). It is a perennial herbal plant. The seeds and swollen bulb-like stems are the edible components. It is native to the shores of the Mediterranean but has become extensively naturalized in many parts of the world mainly in coastal belts. Fennel seeds are considered as a highly aromatic and flavorful herb with cooking and medicinal uses. It is a delicate plant growing to 2.5 m height, and the leaves are approximately 40 cm long. 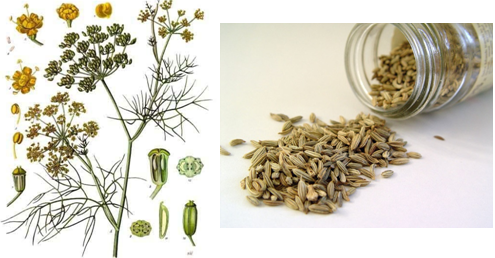 Difference Between Cumin and Fennel

Cumin and fennel may have substantially different properties and uses. These differences may include,

Cumin: Cumin was originated in the east Mediterranean and India.

Fennel: Fennel was originated in the shores of the Mediterranean countries.

Cumin: Cumin is an annual herbal plant growing to 30–50 cm tall. The stem is gray or dark green in color.

Fennel: Fennel is a herbaceous perennial plant growing to 2.5m or more tall. It has an erect trunk with greenish hollow stems.

Cumin: Cumin flowers are small, white or pink in color.

Fennel: Fennel flowers are small and yellow in colour.

Fennel: Edible seeds are oblong and 4–10 mm long. Dried fennel seeds are very aromatic and flavorful. Its taste and aroma are similar to anise.

Edible Part of the Plant

Cumin: Seeds are the edible parts.

Fennel:  Seeds and swollen, bulb-like stems are the edible parts.

Cumin:Cumin is a rich source of iron. Cuminaldehyde, cymene, and terpenoids are the major secondary metabolites present in cumin.

Fennel: Fennel seeds normally have a lower content of vitamins, but they are rich in dietary fiber and minerals. Foeniculoside I is the major secondary metabolites present in fennel.

Fennel: Fennel is distinguished by its characteristic flavor. It is used for cooking various dishes and some natural toothpaste production. The seeds are generally used as a spice and roasted fennel seeds are used for curry powder production. Fennel stems and leaves are used in various Asian foods, particularly in Indian dishes.

In conclusion, both Cumin and Fennel are essential culinary spices, and both have a lot of similar applications. But they are derived from two different plant species and the seeds and stems of fennel plant are used for consumption whereas only cumin seeds are used for human consumption.

Sahu, Deepika (2013). Health benefits of cumin. Times of India. Retrieved 17 August 2014. Cumin (also known as Jeera) has a richness of history to give it a special place in the world of spices.