Cider is considered as one of the most popular alcoholic beverages produced from the fermented juice of apples. Even though any variety of apples can be used to produce cider, many cider manufacturers prefer to use cider apples. During cider production, sugar or extra fruit is added, increasing the alcoholic percentage of the resulting beverage. It is important to note that, cider is also known or pronounced as cyder. The word “cider” is primarily used in North American English whereas the word “cyder” is primarily used in British English. This is the main difference between cyder and cider. 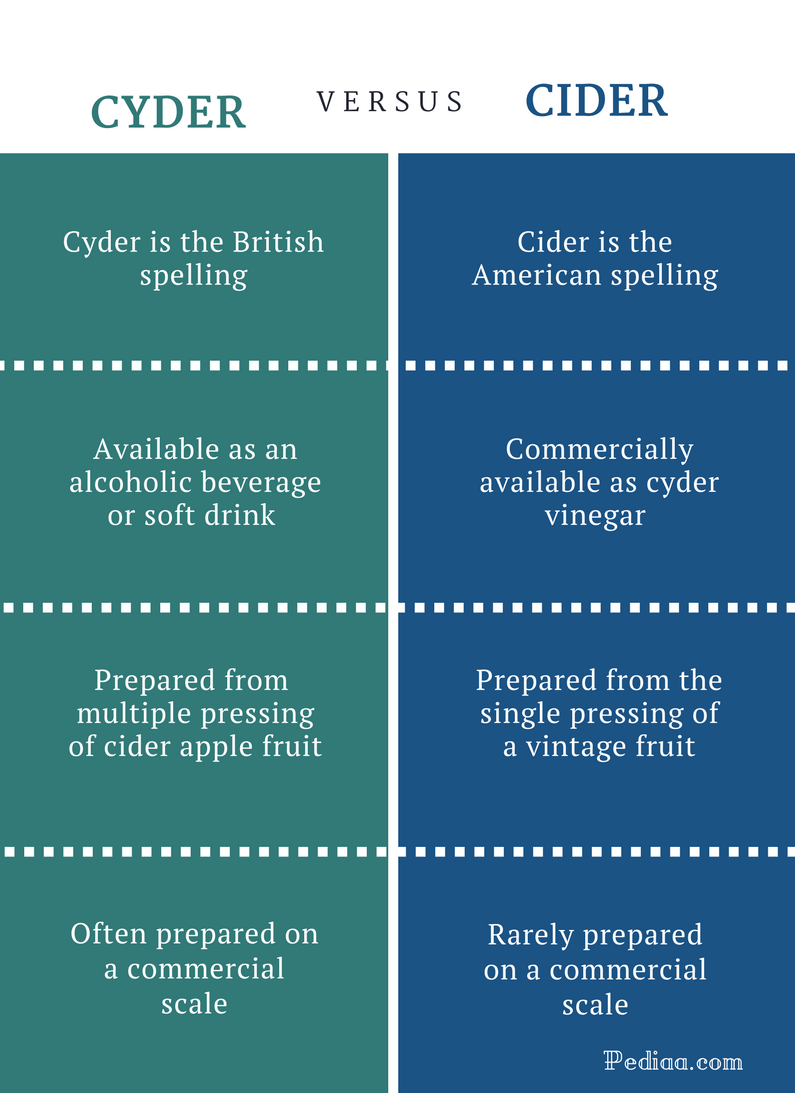 What is Cyder or Cider

Cider or cyder is a fermented alcoholic beverage prepared from any fruit juice including apple juice, peaches, pears (“Perry” cider) or other fruit. Traditional and most common type of cider is apple cider. Based on the different processing conditions, apple cider can be classified into following categories;

The average alcohol content of cider is around 1.2 % to 8.5 % . True cider apples are mainly used for cider production because they are richer in tannins and sharper in flavour. It is widely available and popular in Europan countries and the United Kingdom. Cider is a popular ingredient for Cocktails and it is also used to make vinegar (e.g. Apple cider vinegar). Congeners substances that are synthesised during fermentation of cider are responsible for most of the taste and aroma. Tannins and some other phenolic compounds are congeners found in apple cider.

Health Benefits of Cyder or Cider

Difference Between Cyder and Cider

Cider: Cider is a variant spelling (mainly in American English) of cyder.

Cyder: Cyder is a variant spelling (mainly in British English) of cider. In other words, `cyder’ is European (especially British) usages for the fermented beverage.

Cider: This is available as an alcoholic or soft drink and is produced from the multiple pressing of cider apple fruit followed the fermentation process. Its production methods are sometimes less traditional and therefore it can be less ‘handmade.’

Cyder: This is commercially available as cyder vinegar which is used to balance the pH levels of skin, assisting in removing dandruff and acne. It is vinegar prepared from the single pressing of vintage fruit by the fermentation of apple cider. Sugar in the apple cider is fragmented down by bacteria and yeast into alcohol and then into vinegar. Cyder will mature and with age in either a bottle or barrel. Compared to cider, cyder production is somewhat “handmade” or traditional process. But the difference between sensory and biochemical properties between cider and cyder products are not thoroughly investigated, and it’s difficult to categorize this product as two different products.

Cider: Compared to cyder, cider is often prepared on a commercial scale.

Cyder: Compared to cider, cyder is rarely prepared on a commercial scale.

Lewis, Paul (1989). Fare of the country; England’s Realm Of Cider With a Kick. The New York Times.