Dachshund and Weiner dogs are just two names for the same dog breed. Dachshund is the commonly used name for this particular kind of dog breed. However, due to its unique body shape, it has been called several nicknames including Weiner dog, sausage dog, and hot dog. These dogs are categorized under the dog group called ‘hounds.’ Dachshund were first bred in Germany and used as badger dogs. Their unique long, sausage-shaped body with very short legs helped them to dwell into burrows easily. But later on, they were used as loyal companions for families throughout the world owing to their clever, tenacious and comical behavior. More details about this dog breed will be discussed in this article.

Dachshunds are among the top versatile breeds, performance wise. They can be trained to do any activity including, hunting, conformation, tracking, guarding, etc. However, training of a dachshund requires a lot of attention and patience. There are two types of dachshunds based on their size; standard and miniature. The standard dachshunds weigh in between 16 – 32 lbs and the miniature dachshunds typically weigh less than 11 lbs. They have medium-sized, almond-shaped, dark-colored eyes, which give them an energetic and pleasant expression. Ears are not narrow, moderate in length, rounded and pointed, or folded. The skull is neither too wide nor narrow, but slightly arched. Their teeth are powerful, and the bite may cause severe damage. There are three distinct types of coats; longhaired, smooth-haired and wire-haired. The coat comes with a unique combination of colors. The red color is more frequently seen. Apart from that, black and tan colors are also seen among the breeds. Adult dachshunds must be properly socialized before introducing to children. Therefore, it is recommended to purchase dachshund puppies less than 12 weeks old, if there are children in the family. Dachshunds’ long tubular body provides quite a lot of space for unusually large lungs. With these huge lungs, they can go deep underground burrows, where the oxygen level is low. In addition, their loud, extended barks help their masters to locate them, especially when they are in underground burrows. 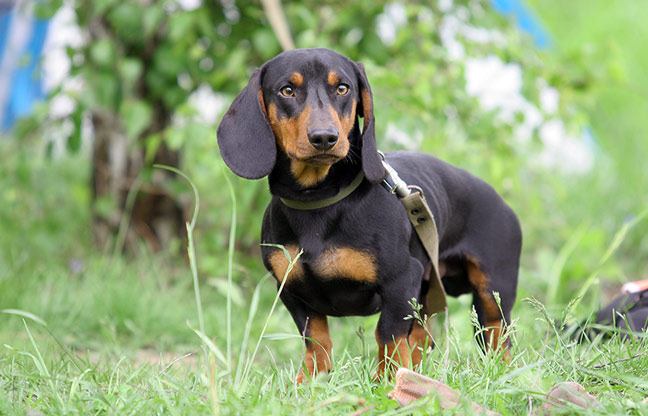 Weiner dog is used as a nickname for dachshunds due to their unique appearance and lovable behavior. There is no difference between Weiner dog and dachshund.

Difference Between Dachshund and Weiner Dog