Data rate and bandwidth are terms that are used often in the fields of communications and networking. Sometimes, there are differences in the usage of these words. In general, the main difference between data rate and bandwidth is that bandwidth refers to the range of component frequencies that a signal carries, whereas data rate refers to the number of bits that a signal carries per second.

When a digital signal is transmitted, it is transmitted as an analog waveform, which can be expressed as a sum of many component sinusoidal waves with different frequencies. In the field of communications, he term bandwidth refers to the range of frequencies of the component waves that makes up the signal. The higher the bandwidth, the higher is the number of component frequencies that could make up a signal, and the closer is the transmitted waveform to the original signal. Ideally, an infinite bandwidth would create carrier wave which is identical to the original signal.

Sometimes, the term “bandwidth” is used in a different context to refer to the maximum amount of data that can be transferred over connection per second. In this sense of the word, “bandwidth” is, in fact, giving the maximum possible data rate. Usually, the term is used in this way when describing internet connections. For instance, a broadband internet connection with a  “50 Mbps bandwidth” has the ability to transfer 50 Mb of data each second. For more information, you can read the article on the difference between throughput and bandwidth.

What is Data Rate

If, instead, the signal is able to represent an

number of different levels during one period, then the data rate is given by: 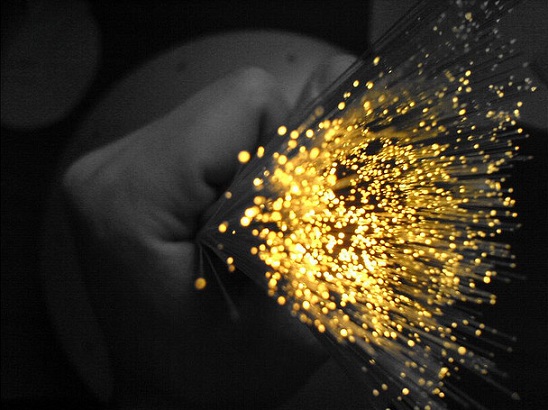 Data rates in communications lines, such as in these optic fibres, increase with their bandwidth.

Difference Between Data Rate and Bandwidth

Bandwidth refers to the range of component frequencies contained in a signal.

Data rate refers to the number of bits that a signal carries per second.

Bandwidth is measured in hertz (Hz).

Data rate is measured in bits per second (bps).