Deoxyribonucleic acid (DNA) and ribonucleic acid (RNA) are essential biological molecules of life on Earth. Each and every living creature is using DNA as their genetic backbone. DNA can be found in cell nucleus in Eukaryotes, and it directs all cellular activity by allocating it to RNA. RNA has diverse biological roles in the human body such as in coding, decoding, regulation, and expression of genes. It transmits messages out of the cell nucleus to the cytoplasm. Ribose can be found in RNA, and it is an organic compound or precisely, a pentose monosaccharide. Deoxyribose is a monosaccharide that participates in the formation of DNA. It is a deoxy sugar that is derived from the sugar ribose by the loss of an oxygen atom. This is the main difference between Deoxyribose and Ribose. In this article, let’s elaborate the difference between ribose and deoxyribose in terms of their uses as well as chemical and physical properties.

Ribose is a pentose monosaccharide or simple sugar with the chemical formula of C5H10O5.  It has two enantiomers; D-ribose and L-ribose. However, D-ribose occurs widely in nature, but L-ribose does not originate in nature. Ribose was first discovered by Emil Fischer in 1891. The ribose β-D-ribofuranose is considered as the backbone of RNA. It is linked to deoxyribose, which is originated in DNA. In addition, phosphorylated products of ribose such as ATP and NADH play dominant roles in cellular metabolism. 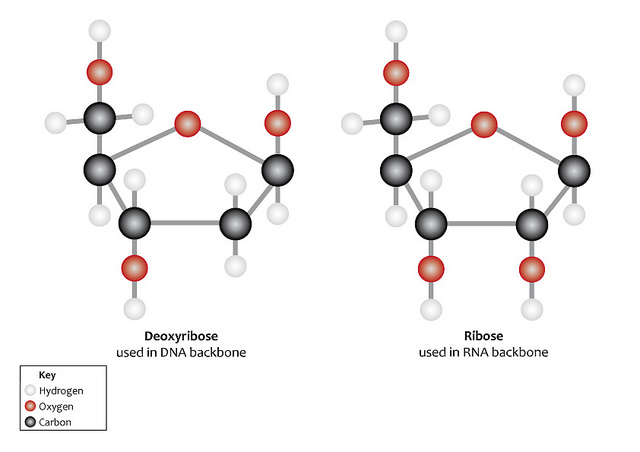 Difference Between Deoxyribose and Ribose

The differences between ribose and deoxyribose can be divided into following categories. They are;

Ribose is an aldo-pentose or, in other words, a monosaccharide containing five carbon atoms. As shown in figure 1, in its open chain form, it has an aldehyde functional group at one end.

Deoxyribose, or more accurately 2-deoxyribose, is a monosaccharide, and its name indicates that it is a deoxy sugar, meaning that it is derived from the sugar ribose by the loss of one oxygen atom. 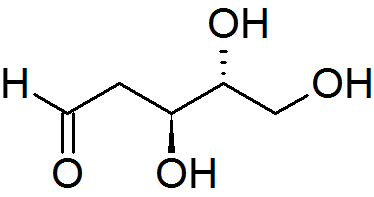 The chemical formula of Ribose is C5H10O5.

The chemical formula of Deoxyribose is C5H10O4.

IUPAC name of Deoxyribose is 2-deoxy-D-ribose.

Ribose is also known as D-Ribose.

Ribose was discovered in 1891 by Emil Fischer.

Deoxyribose was discovered in 1929 by Phoebus Levene.

The D-ribose creates part of the backbone of RNA. RNA is mainly involved in the biologically important protein synthesis. In addition, phosphorylated products of ribose including ATP and NADH play central roles in cellular metabolism such as respiration, photosynthesis, reproduction, etc. D-ribose must be phosphorylated by the cell before it can be used in biochemical reactions. Cyclic AMP and GMP, derived from ATP and GTP, function as secondary messengers in some signaling pathways.

Deoxyribose products have a significant role in biology. The DNA molecule is the chief source of genetic information in each and every living life, comprises of a long chain of deoxyribose-containing units known as nucleotides, connected via phosphate groups. DNA nucleotide consists of organic bases such as adenine, thymine, guanine or cytosine. The absence of the 2′ hydroxyl group in deoxyribose is actually accountable for the increased mechanical flexibility of DNA compared to RNA. In addition, this mechanical flexibility also allows it to assume the double-helix conformation, and to be efficiently and neatly coiled within the small cell nucleus.

In conclusion, both ribose and deoxyribose are primarily important to produce RNA and DNA. In addition, these chemical compounds will participate in valuable biological mechanisms in the human body. 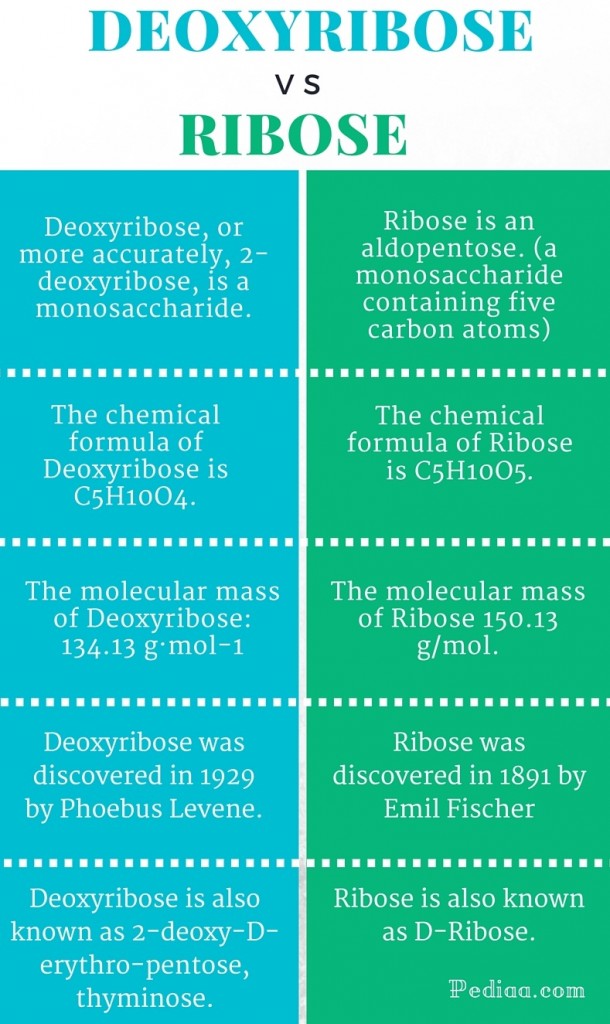 “Chemical structure of Ribose and Deoxyribose” by Genetics Education (CC BY 2.0) via Flickr