Both Ester and Ether are types of functional classes in classifying organic chemical compounds. Classification of chemical compounds makes it easier to analyze their properties within the group as a whole. Both esters and ethers are types of functional classes of chemical compounds that are extensively produced, used and has industrial values. The  difference between ester and ether lies in their chemical structure. The main difference between Ester and Ether is that an ester group needs two Carbon atoms and two Oxygen atoms to complete its characteristic structure. An ester group needs only one Oxygen atom and two Carbon atoms for its structure.

As mentioned above, an ester group needs two Oxygen atoms and two carbon atoms for the completion of its structure. Oxygen (A) will be doubly bonded to Carbon (A), and Oxygen (B) will be singly bonded to Carbon (A) and Carbon (B). i.e. R(O)-OR’; R and R’ are alkyl groups. Esters are produced as a derivative of carboxylic acids. What happens in the reaction is that the ‘H’ in the ‘OH’ group of the carboxylic acid gets replaced by an alkyl (R) group. This step makes esters less reactive when compared to carboxylic acids. However, ester groups retain a considerable level of reactivity due to its ‘carbonyl group’. Carbonyl refers to a group that has an Oxygen atom doubly bonded to a Carbon atom. Due to this carbonyl group, the esters are easily polarizable. Esters are more polar when compared to ethers, however, less polar when compared to carboxylic acids. In addition, esters are able to form H-bonds with external ‘H’ sources, but it cannot form H-bonds with each other.

Esters can have trivial names, but in most cases they conform to the IUPAC nomenclature. In this case, when naming esters, their name would end with the suffix ‘-ate’. For example, Butyl Acetate. The concept of ester formation can also be extended to inorganic compounds.(Ex: Triphenyl Phosphate, which is a phosphate ester.) Furthermore, esters can be produced by the alcoholysis of acyl chlorides and acid anhydrides. The process of esterification is a reversible reaction, and esters undergo a variety of reaction including hydrolysis. An ester group is often used as a protecting group for carboxylic acids in chemical reactions. 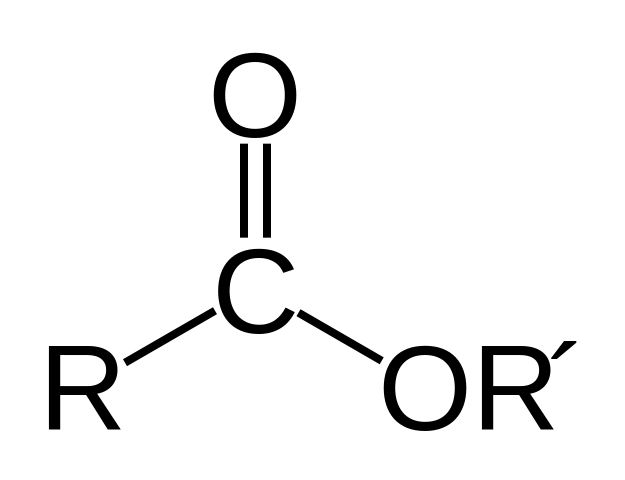 As mentioned above, an ether group have one Oxygen atom and two Carbon atoms. The Oxygen atom will be singly bonded to both Carbon atoms involved. i.e. R-O-R’. Ethers can be seen as a derivative of alcohols, where the ‘H’ in the ‘OH’ group gets replaced by an alkyl (R) group. This makes ethers less reactive. Also, since it doesn’t possess a carbonyl group, its reactivity is even less than that of esters. However, due to the presence of the oxygen atom with lone pairs, it is able to form H-bonds with external H atoms.

In contrast to esters, ethers do have a lot of trivial names. However, according to the IUPAC nomenclature, they are generally labeled as ‘alkoxyalkanes’. Methoxyethane is an example for this. This explains that the Oxygen atom is being bonded to a methyl group and an ethyl group. If both alkyl groups on either side of the Oxygen atom are similar, it’s known as a ‘symmetrical ether’ and, on the other hand, if the groups are not similar, they are called ‘unsymmetrical ethers.’ 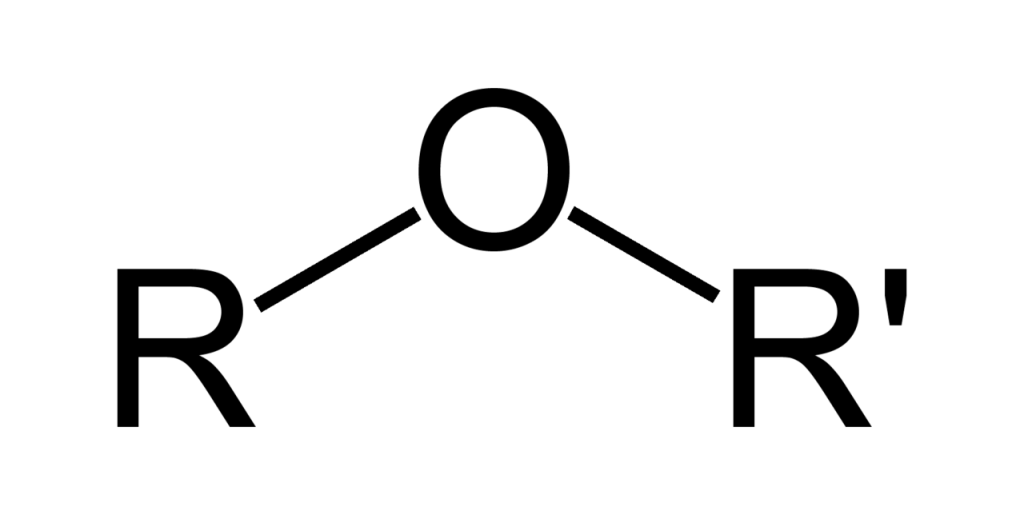 Difference Between Ester and Ether

Esters have a carbonyl group and hence is easily polarizable.

Ethers do not have a carbonyl group.

Esters end with a suffix ‘-ate’ according to the IUPAC rules for naming chemical compounds.

Ethers are named as ‘alkoxyalkanes.’

Esters are derived from carboxylic acids.

Ethers are derived from alcohols.

It is not possible for esters to have symmetrical structures, due to the presence of the carbonyl group.

If both alkyl groups on either side of the oxygen atom in an ether group are similar, the structure is symmetrical. 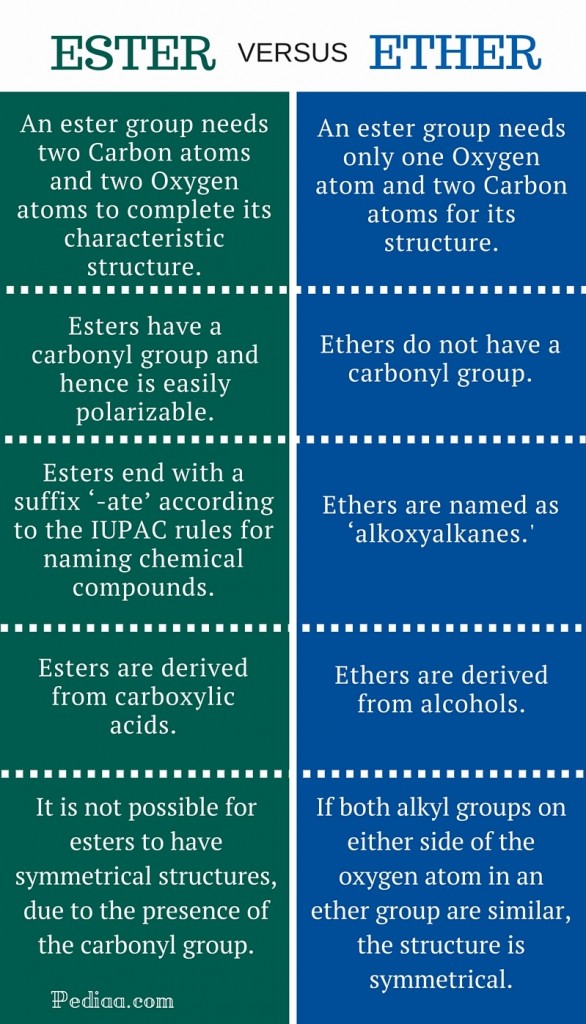 “Ester-general” by Sakurambo – Own work assumed (assumed – based on copyright claims). (Public Domain) via Commons

“Ether-(general)” by  Benjah-bmm27  Own work (assumed based on copyright claims). (Public Domain) via Commons