Molecules in a liquid have a range of kinetic energies. In evaporation, molecules on the surface of a liquid which have enough kinetic energy to overcome intermolecular forces between water molecules escape the surface of the liquid to become gaseous. Some of these molecules may eventually rejoin water molecules on the liquid surface and become a part of the liquid again (condensation). Eventually, the condensation rate would be equal to the evaporation rate, and a constant vapor pressure is established. In this situation, the air above the liquid surface is saturated with molecules that have been evaporated.

Evaporation is responsible for drying clothes and transpiration in plants. Water never comes to a “boil” in these cases but rather evaporate away. 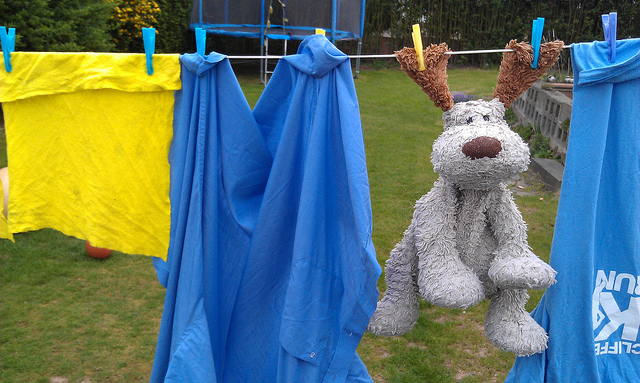 Evaporation is responsible for drying your clothes (or stuffed toys)

As mentioned before, evaporation is a special case of vaporization which occurs when the temperature of the liquid is below its boiling point. Vaporization also includes boiling. This is vaporization that happens when the liquid is at its boiling temperature. Boiling occurs when the vapor pressure is equal to the external pressure. In this condition, liquid molecules below the surface which have enough kinetic energy to overcome intermolecular forces can join up to form bubbles, which can then rise through the liquid. (This would not happen at temperatures below the boiling point. Any molecule which is below the surface that has a large enough kinetic energy would not be able to form bubbles and rise because the external pressure and vapor pressure would push it down). Consequently, where external pressures are low, boiling points of liquids are lower, as well. For instance, at the Mount Everest, where the atmospheric pressure is lower, water could be boiled by warming it to about 70o C (see the video below)

Difference Between Evaporation and Vaporization

Evaporation refers to a specific type of vaporization which occurs at temperatures below the boiling point of a liquid.

Vaporization (vaporisation) refers to a phase transition where a substance changes its phase from liquid to gas; it includes both evaporation and boiling.

Evaporation occurs when the temperature of the liquid is below its boiling point.

Evaporation occurs when the vapor pressure is below external pressure.

Vaporization includes state change from liquid to gas when the vapor pressure is both below or equal to the pressure from the surroundings.

In evaporation, the molecules that vaporize are from the liquid surface.

In vaporization, the vaporizing molecules could come from below the surface when the liquid is boiling.