Luminescence refers to radiation of light from materials, which is not caused by heat. A substance which glows when its temperature has ben raised (such as a bar of metals glowing red-hot), therefore, does not exhibit luminescence.

The light is emitted when an electron in an excited state “falls” down to the ground state. When this process occurs, a photon is emitted, carrying an amount of energy equal to the energy gap between the states. The energy that a photon carries determines its wavelength: if the wavelength is in the visible region of the electromagnetic spectrum, then “light” is seen. 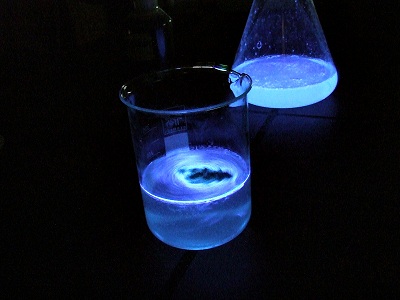 Luciferin is a chemical present in fireflies, which, when oxidised, produces a glow. Similarly, the glow in jellyfish is produced by the compound aequorin.

Electroluminescence is another type of luminescence which occurs when electrons, which are accelerated by strong electric fields, collide with a material and cause the material to ionise (as in the case of gas discharge tubes), or when electrons and holes recombine in a semiconductor material.

The process of fluorescence takes place via several stages. First, the excited electron falls to a lower vibrational energy state, in a process named relaxation. Then, a photon is emitted as the electron falls to the ground state. After the photon emission, the electron again undergoes relaxation to fall to the lowest vibrational energy level at the ground state.

Note that during relaxation processes, the electrons lose energy but photons are not emitted. Consequently, the photons emitted during fluorescence carry less energy compared to the absorbed photon. As a result, the emission spectrum of a material undergoing fluorescence is shifted towards larger wavelengths compared to its absorption spectrum. This shift in wavelengths is called the Stokes shift.

In fluorescent lamps, ultraviolet waves are first produced by passing an electric current through a gas. The ultraviolet rays then cause fluorescence in a coating applied onto the inside of the light bulb. 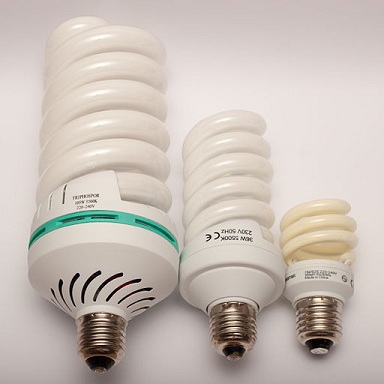 Fluorescent lamps light up due to the effects of fluorescence

Difference Between Fluorescence  and Luminescence

Luminescence refers to any mechanism where photons are generated, without an input of heat.

Fluorescence refers to a specific type of luminescence where the energy to produce the photon comes from the absorption of a photon with higher energy. An excited singlet state is produced in the intermediate stages.

In luminescence processes, in general, a photon may be given off after any time. The lifetime of the electron in the excited may vary from process to process.

In fluorescence, the lifetime of the excited state is very small. Hence, photons are emitted from the atoms soon after the incident photons are absorbed.

“Luminol and Hemoglobin. Luminol glows in an alkalic solution when you add Hemoglobin and H2O2” by everyone’s idle from berlin, germany (http://www.flickr.com/photos/mgdtgd/140282001/) [CC BY-SA 2.5], via Wikimedia Commons