Force and power are both quantities that come up in the study of mechanics. In everyday usage, the two terms may have similar connotations; however, in physics, the two terms have two separate meanings. The main difference between force and power is that the term force is used to describe something that can change the momentum of an object. In this sense, force is defined as the rate of change of momentum. Power, on the other hand, refers to the rate at which a force is able to transfer energy.

A force is something which has the ability to cause an object to change its momentum. Force is given by the rate of change of momentum:

Force is measured in units of newtons (N). A force of 1 N is about the weight of an apple.

Often, a force is described as a push or a pull. You need a force to change the motion of an object physically, like when you push a car. An electric circuit works because there is a force in the circuit that pushes electrons around the circuit. Forces are necessary to keep even small subatomic particles like protons and neutrons bound together in a nucleus. In larger scales, forces cause planets, stars and galaxies to attract each other via gravity.

Work is done whenever a force is used to move an object. Power is the rate of doing work.  If the work done is

, and time is given by

Since Work done is given by

is the displacement, we can write power as

Since the rate of change of displacement

, we can also express power in terms of the resultant force on an object and the object’s instantaneous velocity:

Power can also be defined as the rate of energy transfer when energy is transformed from one form to another. In a lightbulb, for example, the wattage refers to the rate at which the bulb can convert electrical energy to light. 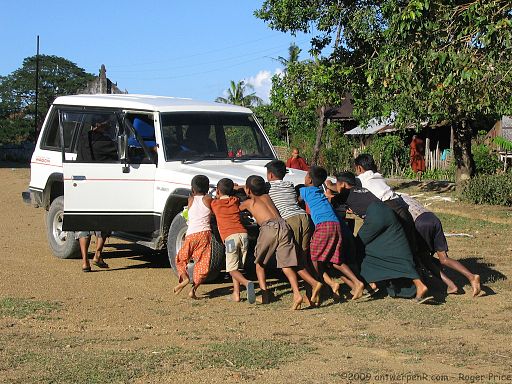 Difference between force and power – Power indicates not just how much effort is given to do work on an object, but the rate at which the effort actually does work on the body.

Difference Between Force and Power

Definition of Force and Power

Force is something that can cause an object to change momentum.

Power is the rate of energy transfer.

Force is a vector quantity.

Power is a scalar quantity.

Force is measured in newtons (N).

Power is measured in watts (W).

“Like most machinery in Myanmar, our car was not in great shape…” by Roger Price from Hong Kong, Hong Kong (Uploaded by Fæ) [CC BY 2.0], via Wikimedia Commons