What is Gluten-free Diet

A gluten-free diet is a dietary plan that eliminates a protein compound called gluten, which is mainly found in cereal grains such as wheat, barley, rye etc. Gluten is a protein that has little nutritional and biological value, and this protein is not essential to the human diet. Gluten protein can give rise to a number of health complications including coeliac disease, wheat allergy, non-coeliac gluten sensitivity, gluten ataxia and dermatitis herpetiformis. Gluten-free diets are mainly designed for these patients because these diets are demonstrated effective treatment. Furthermore, the gluten-free diet may also prevent or manage irritable bowel syndrome, rheumatoid arthritis, multiple sclerosis or HIV enteropathy. A gluten free-diet derived is mainly from naturally gluten-free foods with a proper amount of required micro and macro nutrients. Gluten-free diets usually comprise with meat, fish, eggs, legumes, nuts, fruits, vegetables, potatoes, rice, maize etc. 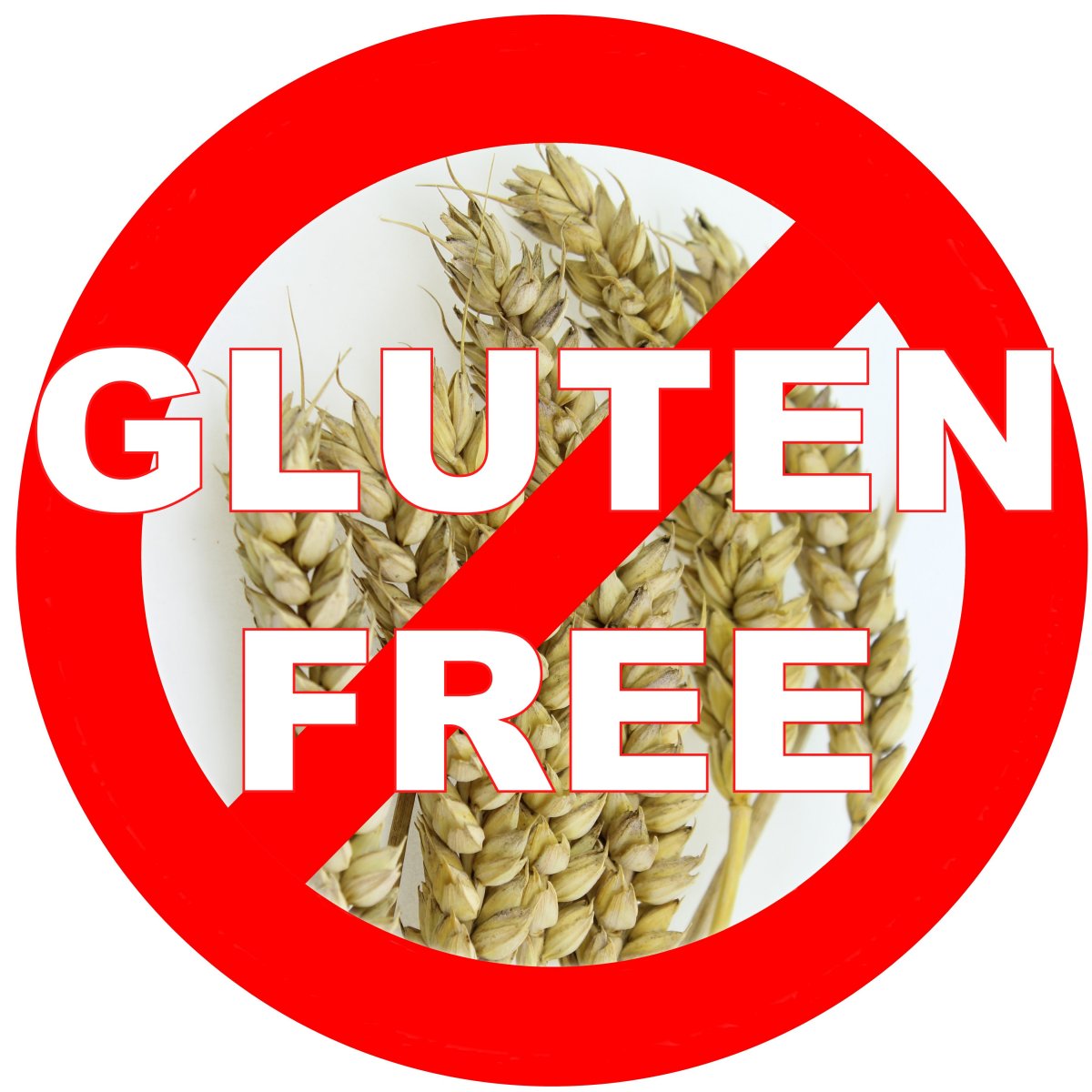 What is a Paleo Diet

The paleo diet can be defined as foods that are free from grain, diary and preservatives. This is also known as a paleolithic diet, caveman diet or stone-age diet. This dietary pattern includes vegetables, fruits, nuts, roots, meat, and organ meats while excluding foods such as dairy products, grains, sugar, legumes, processed oils, salt, and alcohol or coffee. The paleo diet is mainly designed to improve health. 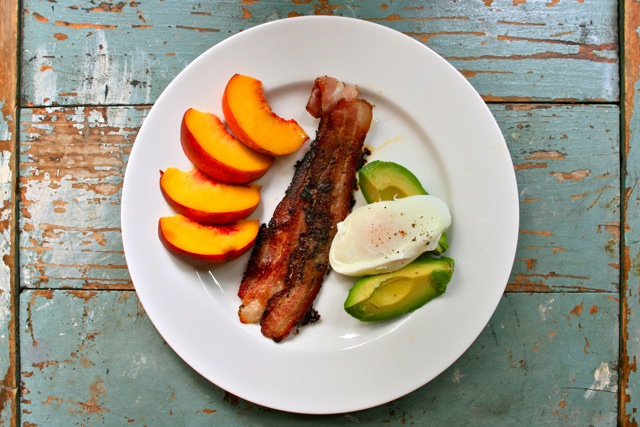 Difference Between Gluten-free and Paleo

Gluten-free: Gluten-free diet includes food or a diet that does not contain gluten.

Paleo: Paleo is a natural food or a diet that does not contain gluten, dairy, alcohol and any artificial preservative or chemical.

Grains in the Diet

Paleo: Paleo is a grain free diet. Beans and legumes are also not allowed in this diet. So, paleo is also categorized as a gluten free diet.

Dairy Products in the Diet

Gluten-free: Gluten-free is mainly targeted toward a specific set of health problems including food allergies and intolerance.

Gluten-free: People usually go for a gluten-free diet if they suffer from gluten intolerance or have been diagnosed with an autoimmune condition known as celiac disease. This disease affects the digestive system and it can inhibit the proper absorption of nutrients, if not treated. Celiac disease patients frequently experience symptoms of digestive upset including gas, cramping, and diarrhea.

Paleo: Many consumers, irrespective of their disease or health status, switch to the paleo dietary plans because they think it is a healthier alternative to the modern Western diet. Also, this is popular among sportsmen and physically active individuals.

Paleo: Paleo diet is not protected by laws and regulations.

Gluten-free: The main objective is to take a balanced diet including all food groups and exclude gluten.

Paleo: The main objective is to take a diet mainly based on natural fruits, vegetables, lean meat, sea foods and healthy foods in order to improve the health and well-being. 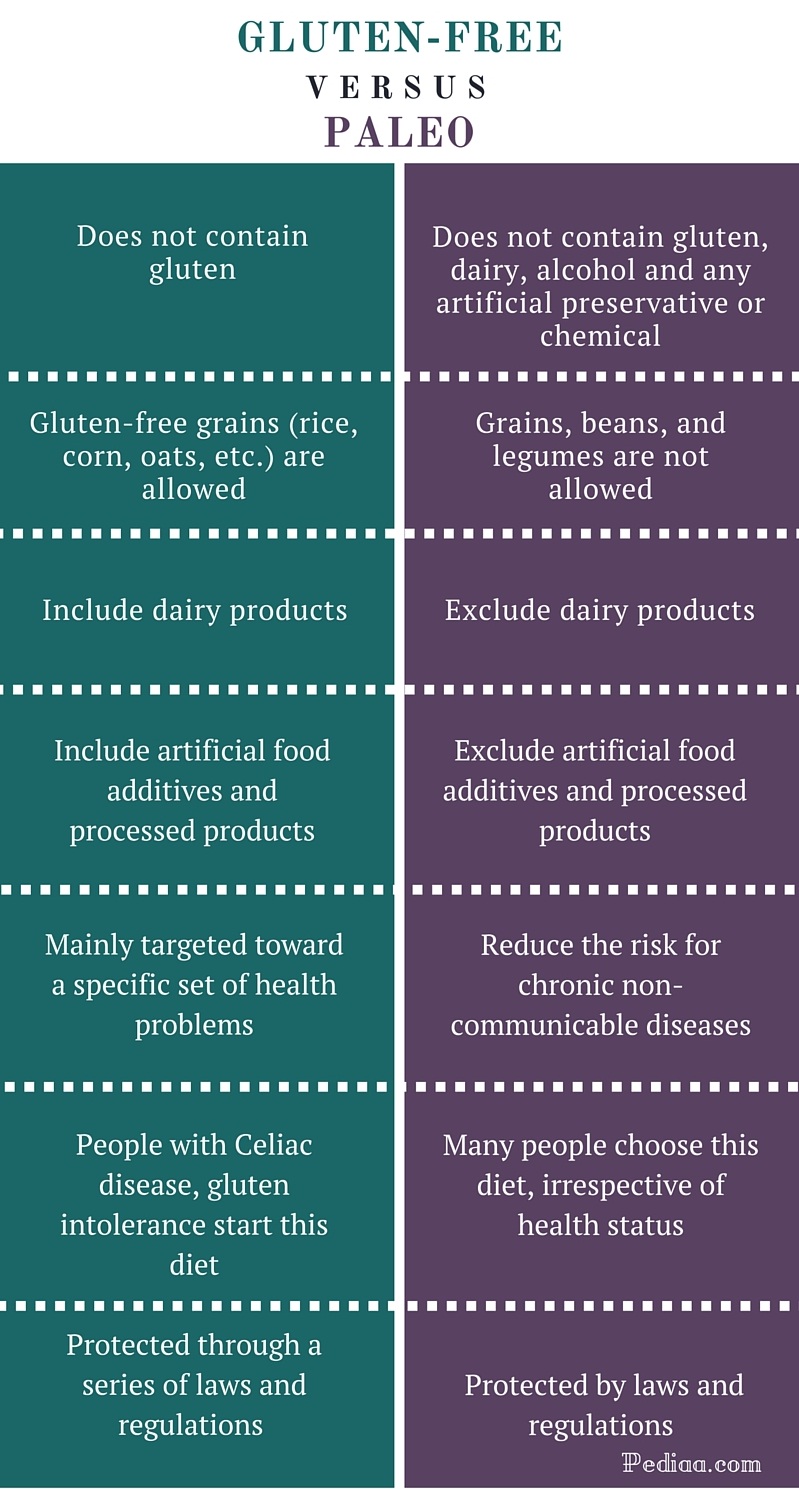