IGBT and MOSFET are two different types of transistors used in the electronics industry. Generally speaking, MOSFETs are better suited for low voltage, fast-switching applications whereas IGBTS are more suitable for high voltage, slow-switching applications. The main difference between IGBT and MOSFET is that the IGBT has an additional p-n junction compared to MOSFET, giving it the properties of both MOSFET and BJT.

What is a MOSFET

MOSFET stands for Metal Oxide Semiconductor Field Effect Transistor. A MOSFET consists of three terminals: a source (S), a drain (D) and a gate (G). The flow of charge carriers from source to drain can be controlled by changing the voltage applied to the gate. The diagram shows a schematic of a MOSFET: 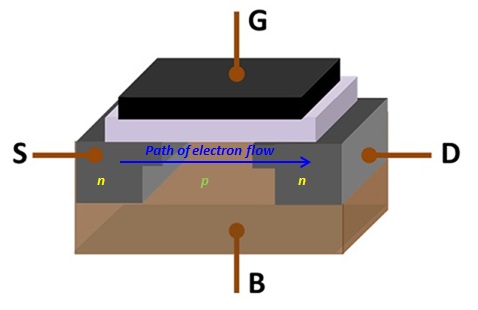 The structure of a MOSFET

The B on the diagram is called the body; however, generally, the body is connected to the source, so that in the actual MOSFET only three terminals appear.

In nMOSFETs, Surrounding the source and the drain are n-type semiconductors (see above). For the circuit to be complete, electrons must flow from source to the drain. However, the two n-type regions are separated by a region of p-type substrate, that forms a depletion region with the n-type materials and prevents a flow of current. If the gate is given a positive voltage, it draws electrons from the substrate towards itself, forming a channel: a region of n-type connecting the n-type regions of the source and the drain. Electrons can now flow through this region and conduct current.

In pMOSFETs, the operation is similar, but the source and the drain are in p-type regions instead, with the substrate in n-type. The charge carriers in pMOSFETs are holes.

A power MOSFET has a different structure. It can consist of many cells, each cell having MOSFET regions. The structure of a cell in a power MOSFET is given below: 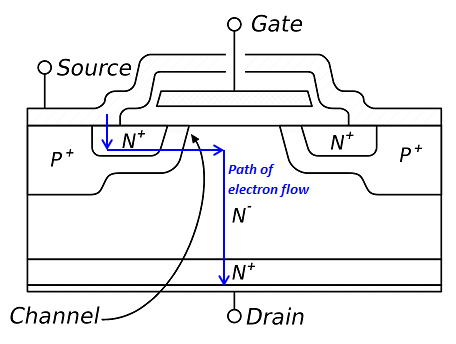 The structure of a power MOSFET

Here, electrons flow from the source to the drain via the path shown below. Along the way, they experience a significant amount of resistance as they flow through the region shown as N–. 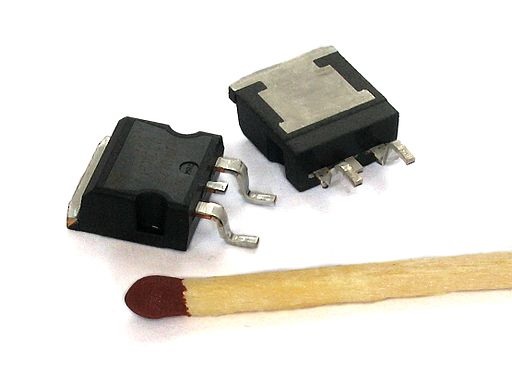 Some power MOSFETs, shown along with a matchstick for size comparison.

What is an IGBT

IGBT stands for “Insulated Gate Bipolar Transistor“. An IGBT has a structure quite similar to that of a power MOSFET. However, the n-type N+ region of the power MOSFET is replaced here by a p-type P+ region: 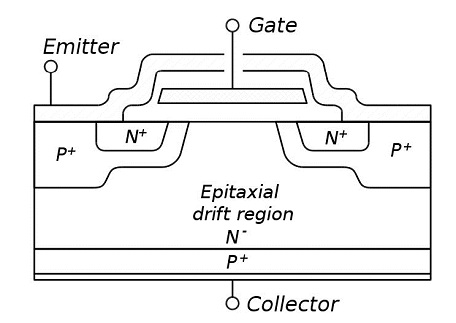 The structure of an IGBT

Note that the names given to the three terminals are slightly different compared to the names given for the MOSFET. The source becomes an emitter and the drain becomes a collector. Electrons flow in the same way via an IGBT as they did in a power MOSFET. However, the holes from the P+ region diffuse into the N– region, reducing the resistance experienced by the electrons. This makes IGBTs suitable to be used with much higher voltages.

Note that there are two p-n junctions now, and so that gives the IGBT some properties of a bipolar junction transistor (BJT). Having the transistor property makes the time taken for an IGBT to switch off longer compared to a power MOSFET; however, this is still faster than the time taken by a BJT.

Difference Between IGBT and MOSFET

The number of p-n junctions

MOSFETs have one p-n junction.

Comparatively, MOSFETs cannot handle voltages as high as those handled by an IGBT.

IGBTs have the ability to handle higher voltages since they have an additional p region.