Magnetism is a term used to describe any phenomenon that can be attributed to a magnetic field. Magnets can exert forces on other magnets or magnetic materials. A magnetic field is described as a region where magnets/magnetic materials experience a force. Magnets have poles, named “north poles” and “south poles”. Like poles (north-north or south-south) repel and unlike poles (north-south) attract. Magnetic poles have never been observed alone (a north pole is always accompanied by a south pole).

Magnetism comes from a property of electrons known as spin (it is important to state here that this does not refer to the electron spinning physically, but rather that there is a property of an electron that can be explained using mathematics similar to the mathematics used to describe how objects “spin” in classical physics). Spin gives electrons a property called the magnetic moment. Usually, magnetic moments of nearby electrons are in opposite directions and so they cancel each other out.

Electromagnetism is a term that describes phenomena that can be attributed to electric or magnetic forces. Electric and magnetic fields are interrelated, and they can be considered to be aspects of one electromagnetic force, as we will mention below.

Before the 1820s, scientists had known about properties of electricity and magnetism through various experiments. In 1820, Hans Christian Ørsted (a Danish physicist) observed that when a compass is brought close to a conductor carrying an electric current, the needle of the compass gets deflected (given that the compass is kept at the correct orientation). This was the first definitive clue that there was a link between electricity and magnetism. The fact that a conductor carrying an electric current produces a magnetic field is very useful. For instance, it allows us to make electromagnets by simply sending an electric current around a coiled wire. 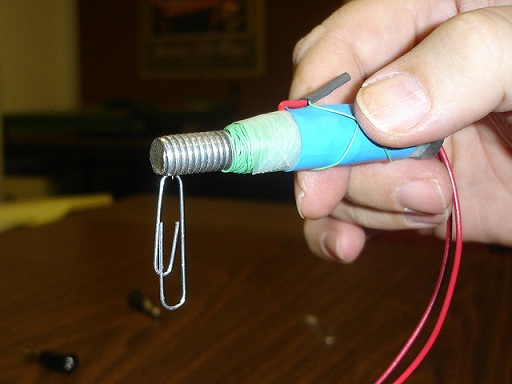 An electromagnet, made by sending an electric current around a conductor.

Following Ørsted’s discovery, many other scientists also began to look closer at the relationship between electricity and magnetism. It was discovered that if two current-carrying conductors are kept close together, they exert forces on each other. Soon, the French physicist André Ampère came up with an equation to describe the attractive force between two such conductors in terms of the size of current that they carry.

In the 1830s, the English physicist Michael Faraday discovered that if a conductor is kept in a changing magnetic field, a current begins to flow through the conductor while the magnetic field is changing. He demonstrated this in two ways: firstly, he showed that if a permanent magnet is moved back and forth inside a coiled conductor, a current begins to flow in the conductor. Secondly, he showed that if a conductor which is not carrying a current is kept close to another conductor which is carrying a current, then a current can be made to flow in the first conductor by changing the current in the other conductor. In the 1860s, James Clerk Maxwell combined the ideas of Ampère and Faraday, expressing them all in a mathematical form and showing that electricity and magnetism are both aspects of a more general underlying phenomenon. With Albert Einstein’s special theory of relativity, it became possible to show that what is experienced as an electric field by one observer could, in fact, be experienced as a magnetic field by another.

The story did not end there: in the 1970s, theoretical physicists Sheldon Glashow, Abdus Salam, and Steven Weinberg showed that at high energies, electromagnetic forces behaved in the same way that weak nuclear forces did. Their findings were later confirmed by experiments and brought about a new unification in physics: the electromagnetic force and the weak force were combined into a single electroweak force. Combining this electroweak force with the other two fundamental forces: the strong nuclear force and the gravitational force, remains to be the greatest challenge in physics.

Difference Between Magnetism and Electromagnetism

Magnetism only refers to phenomena that are caused by magnetic forces.

Electromagnetism refers to phenomena that are caused by both electric forces as well as magnetic forces.