). If a resultant force

acts on the body, the acceleration

that can be produced is inversely proportional to the object’s mass, such that:

Secondly, mass is also the property that determines the gravitational force between two objects. In this context, mass is referred to as gravitational mass (

). The gravitational force of attraction between two objects with masses

, separated by a distance

can be given by,

is called the universal gravitational constant, with

Inertia and gravitational attraction are two separate things, and there is no reason for the inertial mass of an object to be equal to the gravitational mass. However, no experiment has demonstrated that the two are unequal. Mass is one of the base physical quantities, and in the SI system of units mass is expressed in kilograms. A set of traditional balancing scales measures the mass. Since objects are added to both sides of the scale, the gravitational force gets “canceled out” and the measurement you make ends up becoming a comparison of masses.

, then it is given by

Weight is a force, and it is measured in newtons (N). Since weight depends not only on an object’s own mass but also on the masses of bodies surrounding it and distances to these other bodies, the weight can change from place to place. For instance, the gravitational field strength on the surface of the Moon is about a sixth of the gravitational field strength at the Earth’s surface. Therefore, two objects having same masses will still experience different weights if one of them is on the Earth and the other is in the Moon. The object in the Moon will “weigh” about a six times less! A bathroom scale measures your weight because it records how much force you are being pulled down. 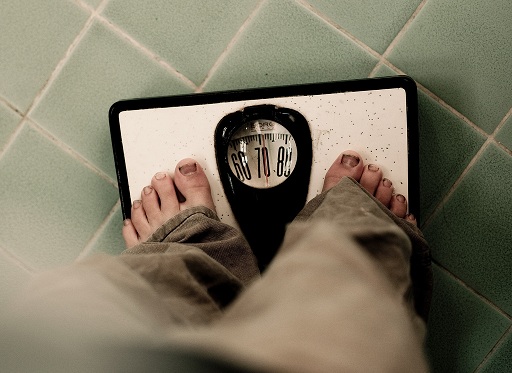 A set of bathroom scales measures weight. You’d notice a 16% “weight loss” if you were to take these scales to the Moon and weigh yourself there (however, your mass would still be the same)!

Difference Between Mass and Weight

Mass is a measurement of the amount of matter in a body. Mass resists acceleration, and mass also produces gravitational attraction.

Weight is the force experienced by a body due to gravity.

Mass of a body does not change, depending on its position.

Weight of a body depends on masses of objects surrounding it and the separations between them.

Mass is a scalar quantity.

Weight is a vector quantity.

Mass is measured in kilograms.

Weight is measured in newtons.