Measles and German Measles are two forms of measles caused by a virus. Even if the basic signs and symptoms of this two conditions are quite similar to each other, one is life threatening whereas the other is innocent or benign in nature. Therefore, it is highly important to find how they differ from each other especially in the aspects of clinical presentation and prognosis in order to decide the most effective treatment plan to achieve a better outcome.  The main difference between measles and German measles is that measles is caused by a virus which specifically infects the respiratory system whereas German measles is caused by a different virus, which generally invades the lymph nodes, skin and eyes.

1. What is Measles? – Cause, Signs and Symptoms, Complications and Treatment

2.  What is German Measles? – Cause, Signs and Symptoms, Complications and Treatment

3. What is the difference between Measles and German Measles? 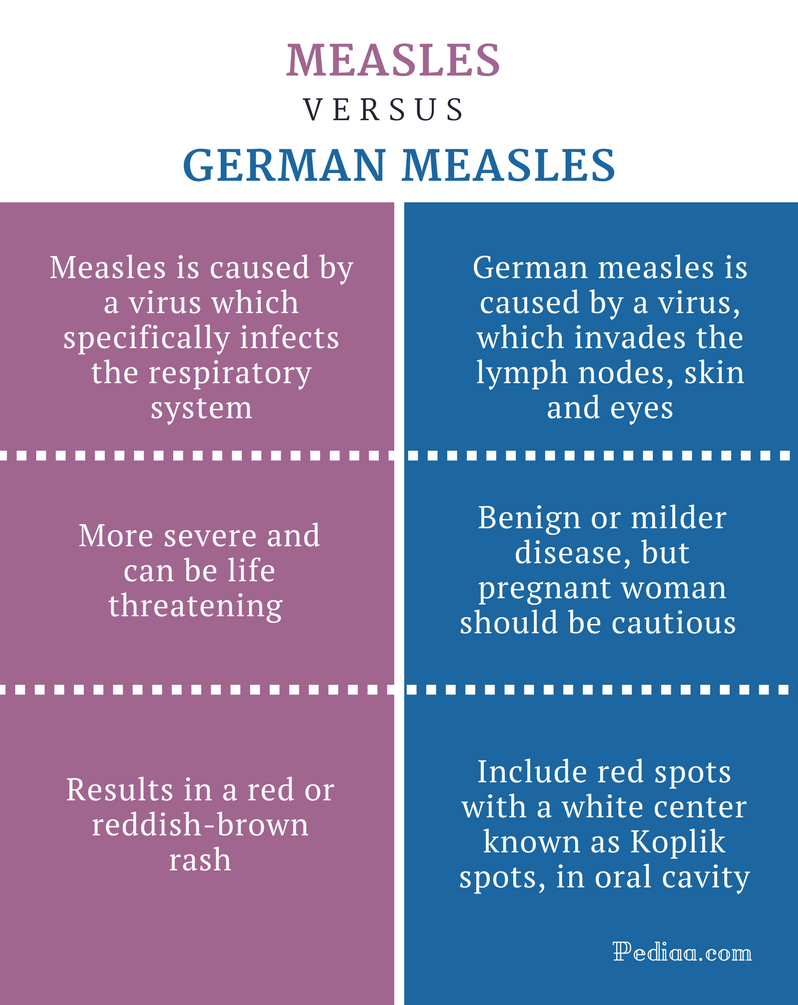 Also known as Rubeola, this is a severe infection caused by a virus. This mainly affects the mucosal linings of the throat and lungs. Being, extremely contagious, this infection can easily spread from one person to another through coughing or sneezing.

After the initial exposure, a person might take 1-1/2-2 weeks to develop the first most signs of infection, including fever which usually begins slowly but increases gradually up to as high as 105 F followed by a cough, runny nose, and conjunctivitis (pink eyes). The rash which appears from 1-7 days after the “prodromal period” of fever and other signs of infection, often begins at the patient’s hairline, later spreading to face, neck and the rest of the body, finally reaching hands and feet as well. Oldest rashes will disappear within about a week. Koplik spots, which are tiny blue-white spots, appearing about 2 days before or after the rash shows up will most often confirm the clinical diagnosis of measles. Other associated symptoms of the condition would be the loss of appetite, enlargement of lymph nodes and diarrhea (common when babies are affected).

Measles can often lead to complications such as secondary ear infections, croup, and pneumonia, if left untreated or improperly treated.

A minority of patients (1 in1000) with measles might develop inflammation of the brain tissue also known as “encephalitis” which could lead to serious consequences.

After the development and popularization of measles vaccine, the incidence of the infection has drastically reduced and as a result, most cases seen at present are found to be in babies younger than 15 months who haven’t had the vaccine and preschool kids who have not received the vaccine for some reason. Additionally, some children who have had the vaccine might also contract this infection due to the lack of proper immunity acquired by the vaccine.

Measles should be promptly treated before allowing to worsen and give rise to aforementioned complications. The best way of managing both measles and German measles is to get adequate bed rest and drink plenty of fluids. Acetaminophen can be given for pain relief and fever. There are no any other medications to treat measles.

Since Vitamin A deficiency has identified to be a risk factor for measles, World Health Organization and UNICEF recommend 1-3 doses of vitamin A to children above 6 months of age who suffer from measles and are hospitalized due to complications associated with measles.

Furthermore, antibacterial antibiotics are often used to treat bacterial pneumonia which can occur as a secondary bacterial infection during an episode of measles. 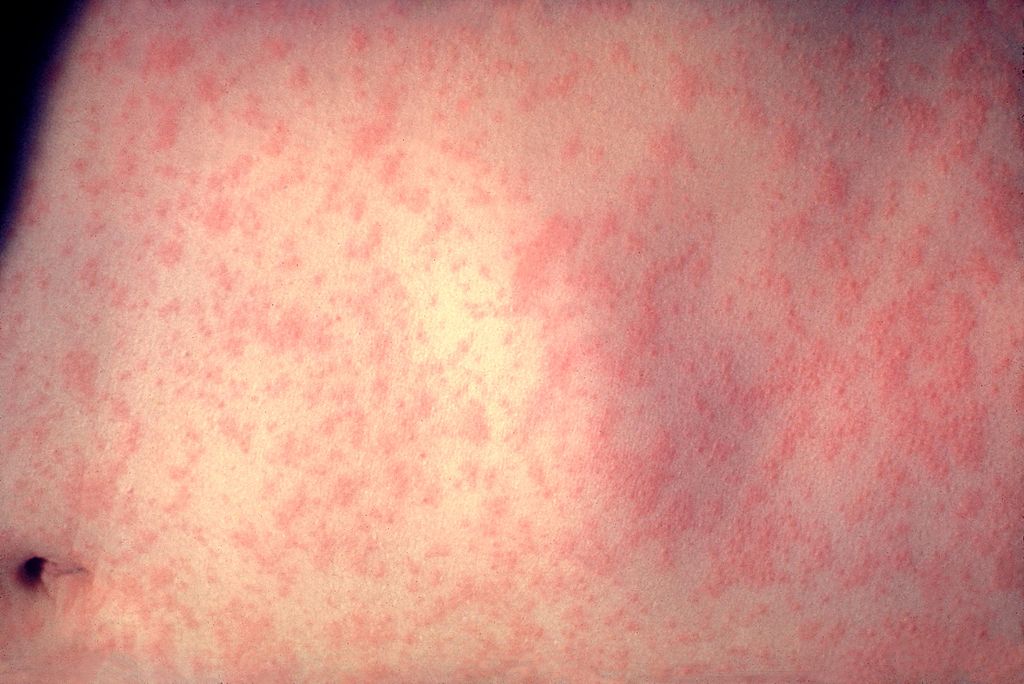 What is German Measles

Also known as Rubella, German measles has so far been identified as a benign disease. The patients will often experience a red, bumpy sometimes itchy rash, enlarged lymph nodes particularly around ears and neck and a mild fever. Furthermore, adolescents and adult women have a higher incidence of experiencing muscle and joint aches which usually disappear within few days. The appearing of signs and symptoms would take around 2-3-1/2 weeks following the initial exposure.

It is important to know that, being immunized against rubella virus would not prevent you acquiring rubeola infection some day in the life.The most dangerous issue about Rubella is that if a woman gets the infection during the first 3-4 months of her pregnancy, the virus can give rise to several birth defects which are quite severe and even fatal. Commonest ones include “congenital rubella”, eye defects such as cataracts, glaucoma, and “microphthalmia”, heart problems, ear problems and many other neurological problems including mental retardation.

Therefore, every pregnant woman should be aware of the above issue and should to get immunized against the virus. Fortunately, a single dose of the vaccine usually gives life-long protection. Two doses will be given as a combined measles-mumps-rubella or “MMR”, vaccine where the first shot will be given to children at the age of 12-15 months and the second shot will be at 4-6 years of age.

Additionally, Rubella immune globulin can help to minimize the severity of the symptoms of rubella. But there is no guarantee cannot make sure that it would definitely prevent the infection and birth defects in the developing baby.

Difference Between Measles and German Measles

The most important difference between these two conditions is that the causative viruses are not the same. So it is necessary to remember, that immunization against one particular type would not give protection against the other for sure. Furthermore, the signs and symptoms of the two types can also differ from one another along with the areas affected.

Measles is caused by a virus which specifically infects the respiratory system, resulting in flu-like symptoms. As a result, the affected individual will experience fever and cough.

German measles is caused by a different virus, which mainly invades the lymph nodes, skin and eyes, resulting in fever, enlargement of lymph nodes and conjunctivitis. However, the itchy red rash, covering the skin would be seen in both conditions.

Measles usually last for several days, can be life threatening and cause serious complications if left untreated.

German measles is a benign or milder disease which will only last for about three days.

Even though Measles is the more serious type, pregnant women should be more cautious about German measles which can result in dangerous complications for the baby developing inside the womb. It may even cause worse scenarios such as miscarriages. As most of the individuals affected by German measles wouldn’t show obvious signs or symptoms, it is highly encouraged for pregnant women to have the vaccination at least a month before getting pregnant.

Unlike German measles, measles usually results in a red or reddish-brown rash which would cover the entire body. It will give rise to fever and runny nose. The characteristic rash found in patients with measles include red spots with a white center known as Koplik spots, found in the oral cavity.