Electrical devices are connected to a typical single-phase system via three types of terminals: neutral, ground, and live. Sometimes, the ground terminal may be absent. The live terminal is connected to the alternating power source. The main difference between neutral and ground is that neutral provides a return path for the current in order to complete the circuit, while ground connects metal parts of a device to the earth in order to provide a safe path for current to flow though, in case a wire becomes damaged and metal parts of the device starts conducting current.

Every appliance connected to an electric circuit must have at least two terminals. Current should enter the device through one terminal, and leave through the other. In ordinary domestic electric circuits, every device is connected via a live and a neutral wire (in three-phase systems, a neutral wire is not necessary, but we will restrict our description to single-phase systems). The live wire is connected to the incoming power supply, and the neutral wire provides a return path for the current from the device. The image below shows a type of plug and a socket that is used in the USA. The letters N, L and G on the diagram indicate the neutral, live and ground terminals respectively. 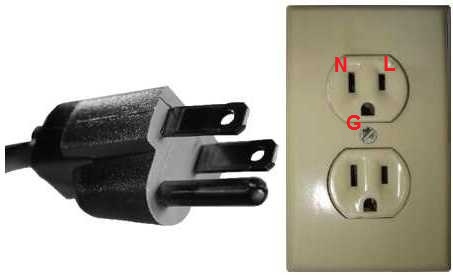 Plug and socket used in the USA: N=neutral, G=ground, L=live

In the USA, the neutral wire is white, the live wire is black and the ground wire is either green/green with strips or bare. The figure below shows the type of socket that is used in the UK: 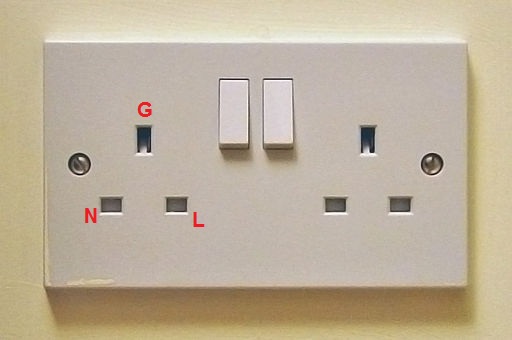 The type of socket used in the UK: N=neutral, G=ground, L=live

In the UK, the neutral wire is blue, the ground wire is yellow-and-black striped and the live wire is brown.

The ground is sometimes referred to as the “earth”. The ground provides a conductive path for electric currents to flow to the earth. For instance, if the live wire becomes damaged and ends up making contact to a metal part of the device, a person touching that part of the device could receive an electric shock. In this case, the current finds a path to flow to the earth through the person. If a ground wire had been connected to the metal part of the device, then the current would have found a low-resistance path to the earth through the ground wire. If the person had touched the metal part while it was grounded, a smaller current would flow through the person now, since the path through the ground wire has much lower resistance and the current prefers to flow through lower resistance paths. The ground is not an essential part for the functioning of an electric device, it is a safety feature.

Difference Between Neutral and Ground

Neutral provides a return path to the current flowing through a device and completes the electric circuit.

Ground provides a safe path for the current to flow through in case there is a damage in the circuitry.

Neutral wire conducts current every time a device is on.

Ground wire conducts current only when there is a damage in the electric circuit.

Every device connected to a single-phase power supply requires a neutral wire in order to function.

Devices can still function without ground wires. Devices that do not expose any metal parts may not be designed to have a ground connection in the first place.

The neutral wire is white in the USA and blue in the UK.

In the USA, the ground wire is either green/green with strips or bare and, in the UK, it is yellow-and-black striped.

“B_plug.jpg” by Chameleon at English Wikipedia (Taken with full permission from Electricity around the world (granted by Conrad H. McGregor).) [Public Domain], via Wikimedia Commons (Modified)

“This image is a digital photograph taken by myself on 17/06/06. It is not available anywhere else.” by Ianinhoose at English Wikipedia (Transferred from en.wikipedia to Commons by Zscout370 using CommonsHelper.) [Public Domain], via Wikimedia Commons (Modified)