Peanut and Groundnut are both types of oilseeds. Oilseeds can be defined as small, hard, dry seeds that are rich in oil. Oil seeds are known as one of the main supplementary food due to the great demand for their nutrient content and vast consumption worldwide. Peanut is one of the major commercially important oilseed crops which is mainly cultivated in tropical and sub-tropical areas. Peanut is also known as an annual leguminous crop yielding from pods, used as food for both humans and animals.  It is rich in fat and proteins. In contrast, groundnut may refer to peanuts like leguminous crops that mature and ripe underground as well as specific kinds of roots and tubers. This is the main difference between peanut and groundnut. They are more or less similar in their botanical and physiological features among different groundnuts species, and it becomes difficult to separate those different features correctly and distinguish one from the other. Consequently, the terms peanut and groundnut are frequently used interchangeably. Therefore, this article explores the differences between peanut and groundnut.

The family of groundnuts includes arachis villosulicarpa, bambara groundnut, peanut, hausa groundnut and others which also belong to the family Fabaceae or Leguminosae. Groundnut can also refer to the tuber root Apios Americana, Conopodium majus and Dwarf ginseng that bears edible beans as well as tubers. These groundnuts can be used for numerous agricultural purposes such as intercropping, crop rotations, biological fuels, green manure production, and rhizobium biofertilizer. They are used as food not only for humans but also for animals. 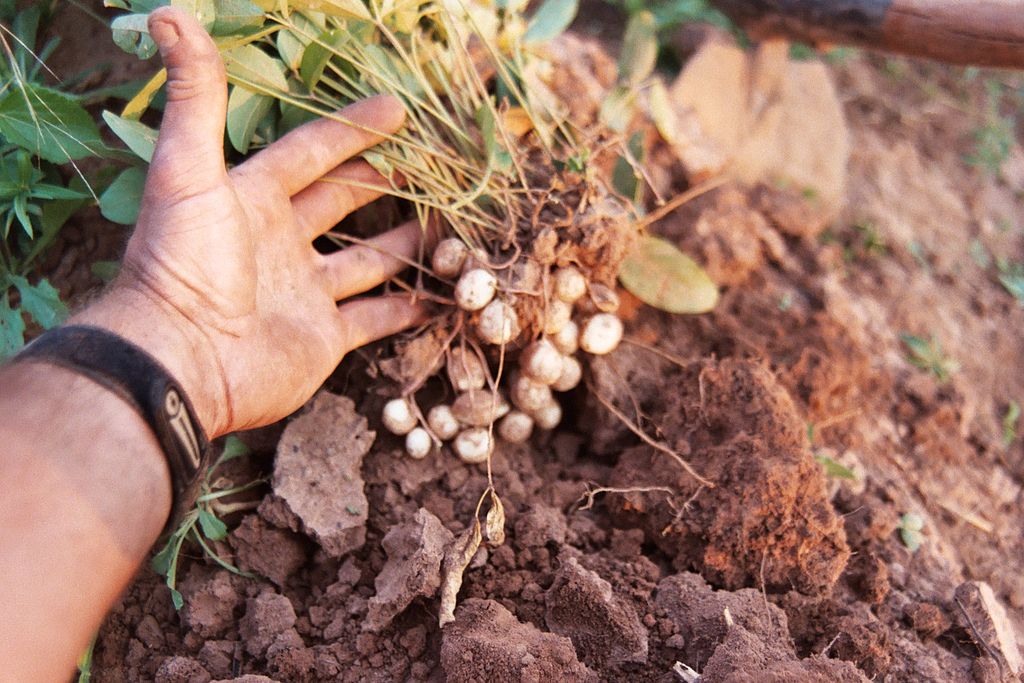 The botanical name of peanut is Arachis hypogaea. Peanuts belong to the family Fabaceae or Leguminosae and are grown in larger quantities and provide food energy, fat, and protein for the entire world. In addition, they are considered as major decorating ingredients for confectionery production such as chocolates, cakes, biscuits, puddings, etc. Peanuts are a rich source of macronutrients (healthy fats, oils, and protein) and micronutrients (vitamins, minerals) as well as bioactive phytochemicals (polyphenols, flavonoids, etc.). Peanuts are cultivated agriculturally, primarily for their human food grain seed, for livestock forage and silage production, and as soil-enhancing green manure. Peanuts contain symbiotic bacteria known as Rhizobia within root nodules of plant root systems. These bacteria have the distinct capability of fixing nitrogen from atmospheric. This organization helps the root nodules to act as sources of nitrogen for peas and create them relatively rich in plant proteins. Therefore, peanuts are among the greatest sources of plant protein and also serve as fertilizer for the soil. Scientific classification of peanut is as follows;

Difference Between Peanut and Groundnut

Groundnut and peanut may have substantially different properties and applications. These differences may include,

Peanut is a the plant of the pea family that typically comprise of seeds of peanuts, which develop in pods that ripen the underground.

Groundnut is a North American leguminous vine (Apios americana) plant of the pea family, which yields a sweet edible tuber or a different term for peanut.

Peanuts are used for

Groundnuts are used for

Peanuts seeds are the edible component.

Peanuts do not have any categorization.

Legumes in Faboideae subfamily such as;

Some people are allergic to peanuts. Peanuts may be adulterated with the mold Aspergillus flavus which creates a carcinogenic constituent known as aflatoxin.

Some fresh raw beans of groundnuts comprise a harmful toxin called lectin phytohaemagglutinin. In addition, other groundnuts except peanuts do not cause many harmful allergies.

In conclusion, Peanut is also categorized as a type of groundnut as well. Groundnut may not only refer to peanuts but also to particular kinds of roots and tubers. Both groundnuts and peanuts are rich in carbohydrates, protein, and dietary fiber. 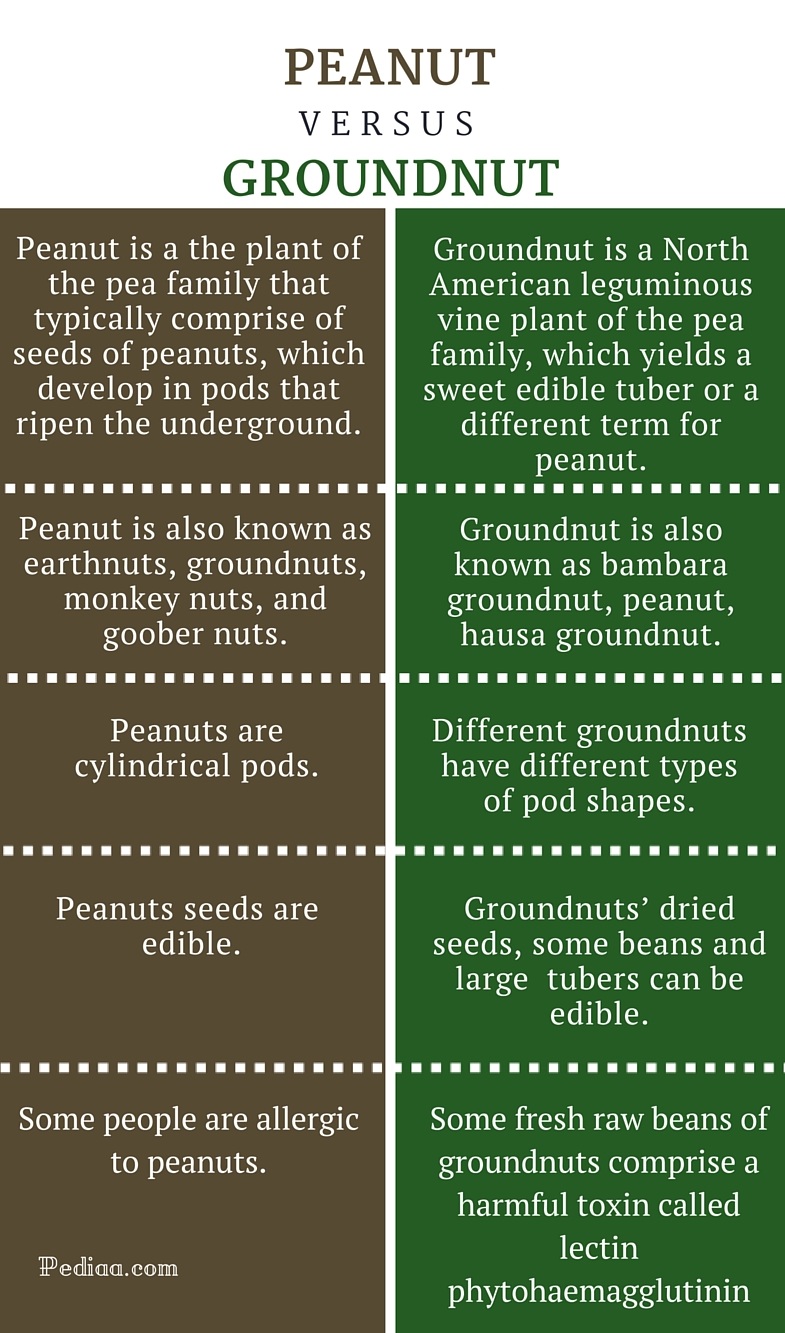 Dansi, A., & Akpagana, K. (2012). Diversity of the Neglected and Underutilized Crop Species of Importance in Benin. The Scientific World Journal, 1-24.