Literally meaning of the word pecan is, ‘a nut that needs a stone to crack it because it is too hard to be cracked by hand.’ This nut is originated in Mexico. The pecan seeds are edible, and they can be consumed in raw form or used in cooking, mainly in sweet desserts such as toffees, chocolates, etc. In addition, pecan seed, the pecan tree wood is used in the production of furniture, wood flooring and flavoring firewood for smoking meats. The US is the world biggest pecan producer and accounts for 80% and 95% of the world’s production.  Pecans are a rich source of dietary fiber, manganese, magnesium, phosphorus, zinc, and thiamin. They are also a rich source of protein, iron and B vitamins. Their fat content is comprised mainly of the monounsaturated fat, oleic acid, and the polyunsaturated fat, linoleic acid. However, pecans also have very little amount of omega 3 fatty acid. Peanuts are available in a variety of sizes such as mammoth, extra-large, large, medium, small and midget. In addition, they are also available in several forms such as whole pecans, pecan halves, pieces, granules, and meal.

A walnut is a nut that belongs to the genus Juglans and family Juglandaceae. Pecans are used in food after it fully ripened; it is usually roasted before consumption. But, raw pecans (green in color) are used for pickles. The walnut is nutrient-dense with protein and essential fatty acids. During this ripening process, the husk will become fragile and the shell hard. The two most common species of walnuts are the Persian/English walnut and the black walnut. The black walnut is rich in high flavor, but due to its hard shell it is not commercially cultivated. Therefore, nutmeat of the black walnut from the Juglans nigra is less commercially available. China is the world’s biggest producer of walnuts. Walnuts are also considered to be healthy for human health because of high omega 3 content and highest antioxidant content. Walnuts can be eaten in their raw, toasted or pickled form or used as an ingredient such as walnut cake, and chocolates. Commercially available walnut oil is mainly used as a food ingredient, particularly in salad dressings. 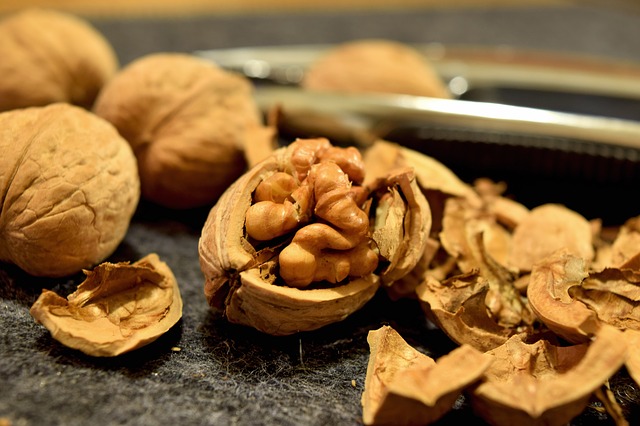 Difference Between Pecans and Walnuts

The differences between pecans and walnuts can be divided into following categories. They are;

Pecans are darker brown in color.

Pecans are oval or oblong shaped.

Pecans are harder, and a stone is needed to crack the shell.

Walnuts are not hard compared to pecan

Pecans are elliptical or elongated, with long, deep edges traveling along the length of the nut

Walnuts look like a human brain in shape. They are larger and broader than the pecans

Walnuts have a bold, somewhat bitter flavor leaving an oily feel inside the mouth or tongue. Therefore, walnuts are frequently roasted before consumption.

Walnuts contain the highest amount of antioxidants amongst all the nuts including pecans. Therefore, walnuts are important for preventing various non-communicable diseases including cancer, cardiovascular disease, and diabetes.

Walnuts are more expensive than pecans.

Pecans are not used as ink or dye. Pecan tree wood is used in the production of furniture, wood flooring and flavoring firewood for smoking meats.

The black walnut husk is used to create ink for writing and drawing or to make a dye for fabric.

In conclusion, both pecans and walnuts have different physical properties, as well as some different nutritional values. These nuts provide numerous health benefits to the body and are considered to be beneficial to the human heart. This is mainly due to their healthy fat content. They both contain mono – and poly – unsaturated fat, which has been an identified to lower cholesterol level. Thus, walnuts and pecans are rich in nutrients, and both should be incorporated into your daily diet. 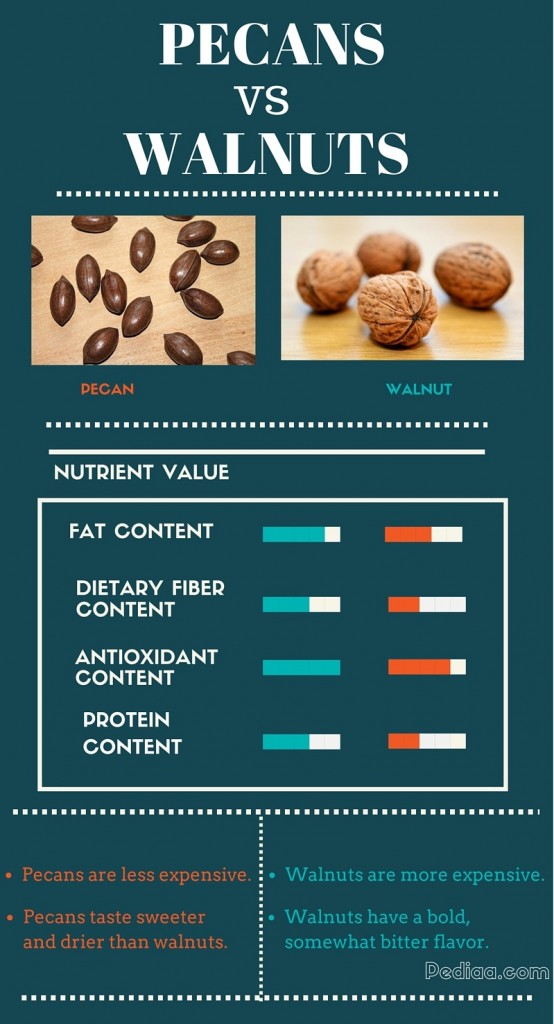