Porosity measures how much space is between rocks. It is taken to be the ratio of the volume of empty space (or pores) in a rock to its total volume, and it is often expressed in terms of a fraction or a percentage. Since fluids can occupy these free spaces between rocks, porosity is also a measurement of how much fluids that rocks can hold.

is measured. Next, the saturated sample is immersed in water, and the “mass” of the submerged sample,

is measured again. (Note that in fact we are measuring weights, however, the factors of

cancel out, so you can treat the mass readings taken from a spring balance as readings of weight).

Then, the mass of water added to the sample is

. If the density of water is

, then the volume of pores in the soil sample is

Another method for porosity measurement involves the use of Boyle’s Law. In this method, gases are used to fill up the pores between soil particles. According to Boyle’s law, for a fixed mass of gas at constant temperature the pressure of the gas is inversely proportional to its volume. To determine porosity using Boyle’s Law, two connected chambers are used. The volumes of these chambers are known and the pressure of gases inside these chambers can be measured using a pressure gauge.

Initially, the two chambers are separated by closing a valve between them. A container with a known volume, called the core, is filled with the soil sample. Let us call the volume of the core

. The core is placed inside one of the chambers and  the air is taken out of this chamber. Gas is still present in the other chamber, and the air pressure inside this chamber is measured. Let us refer to the volume and pressure in this chamber as

Next, the valve between the two chambers is opened, allowing for air from the first chamber to fill up the second chamber as well. The pressure in the chambers is measured again, and let this pressure be

. Using Boyle’s law, the total volume occupied by the gas, which we will call

, can now be calculated:

can be given by,

includes the volume of the second chamber and the tubing between the two chambers. Now, the above expression allows us to calculate the volume of pores

gives the total volume of the soil sample. The porosity

is then given by, 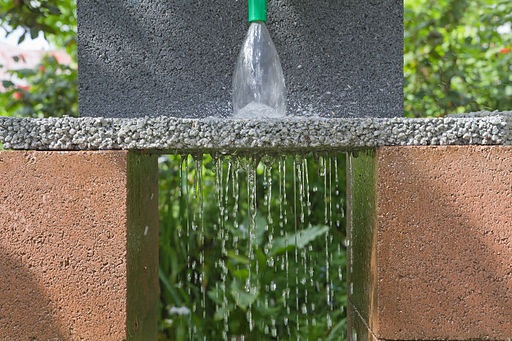 Mathematically, permeability is described in Darcy’s law. Darcy’s law is a formula describing the flow rate of fluid through a porous medium. According to this law, if a fluid with a viscosity of

, then the total volume of fluid discharged per second

is the pressure at the start and

is the pressure of fluid after flowing through length

in this formula is defined as the permeability of the medium. The unit of

Difference Between Porosity and Permeability

Porosity measures the amount of empty space between rocks or in the soil as a fraction of the total volume.

Permeability measures how easy it is for fluids to flow through a substance.

Porosity is a ratio of volumes, so it has no units.

Permeability has units of area (m2 in the SI system).