Sugar is generally referred to as table or granulated sugar that is chemically known as sucrose. An average person consumes about 25 kilograms of sugar each year, which is equal to over 260 food calories per person, per day. Sugars originate in the tissues of almost all plants. They are present in very high concentrations, mainly in sugarcane and sugar beet. When sugar cane or beet arrives from the fields, sugar millers grind and press it to extract the sweet sap solution. Crystals that form in that liquid are known as raw sugar. White sugar crystals are mixed with various amounts of molasses that result in soft, lumpy sugar crystals, which are known as brown sugar. This is the main difference between raw sugar and brown sugar. The purpose of this article is to highlight the differences between raw sugar and brown sugar.

What is Raw Sugar

The process of manufacturing raw sugar involves pressing sugar cane, or sugar beet and extracting the sugar, which is then thoroughly mixed with lime to gain the required pH balance and to help settle out foreign matters and impurities. Then this solution is evaporated to produce a solid mass that is passed through a centrifuge to get raw sugar crystals. Then it is dried to produce granules. These sugar granules are light brown in color and are named as raw sugar. Raw sugar is the most natural form of sugar compared to other forms. What is Brown Sugar

Brown sugar is chemically a sucrose sugar product with a characteristic brown color mainly due to the presence of molasses. Natural brown sugar is an unprocessed or partially refined soft sugar containing sugar crystals with some residual molasses content. But commercial brown sugar is manufactured by the addition of molasses to refined white sugar. 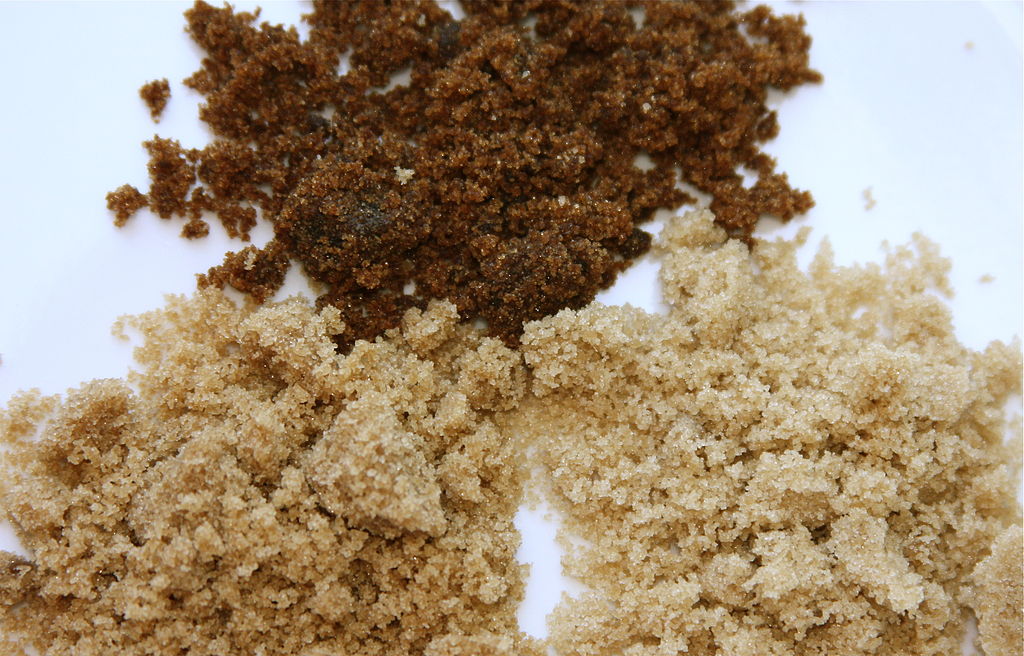 Raw sugar: Raw sugar is used as a sweetener for coffee or in baking and cooking. It is also used in preserving and is especially wonderful in rich relishes and chutneys.

Brown sugar: Brown sugar is dark brown in colour compared to raw sugar, and it has a liquorice flavor.

Use as a Substitute

Raw sugar: Raw sugar can be used in place of refined white sugar.

Brown sugar: Its crystal is as fine as caster sugar, so it dissolves quickly; thus, is frequently used to replace caster in quick cooking recipes.

Raw sugar: When beet is processed at the processing plant, raw beet juice undergoes the processes of carbonation and crystallization. The raw juice is then concentrated by evaporation to make a thick and dense juice. Then the thick juice provides for the crystallizers. Reprocessed sugar is liquefied into it, and the subsequent syrup is known as the mother liquor. The mother liquor is concentrated by boiling under a vacuum in big vessels and fine sugar crystals are obtained which are known as raw sugar.

Brown sugar: When the impurities are removed from the raw juice by the process of carbonation, sugar crystals appear in white color during the crystallization process. Sulfur dioxide is used to inhibit the formation of color-inducing molecules as well as to stabilize the sugar juices during evaporation. To produce granulated white sugar, sugar must be dried by heating in a rotary dryer, and then by blowing cool air for several days. Then white sugar is mixed with various amounts of molasses in order to produce brown sugar.

Both raw and brown sugars are essential culinary ingredients, and both have a lot of similar applications. But they are derived from two different processing methods. Excess consumption of these sugars is associated with detrimental health effects. Sugar has been associated with obesity, diabetes, cardiovascular disease, dementia, macular degeneration, and tooth decay.  However, the raw sugar is not always easy to differentiate from brown sugar. 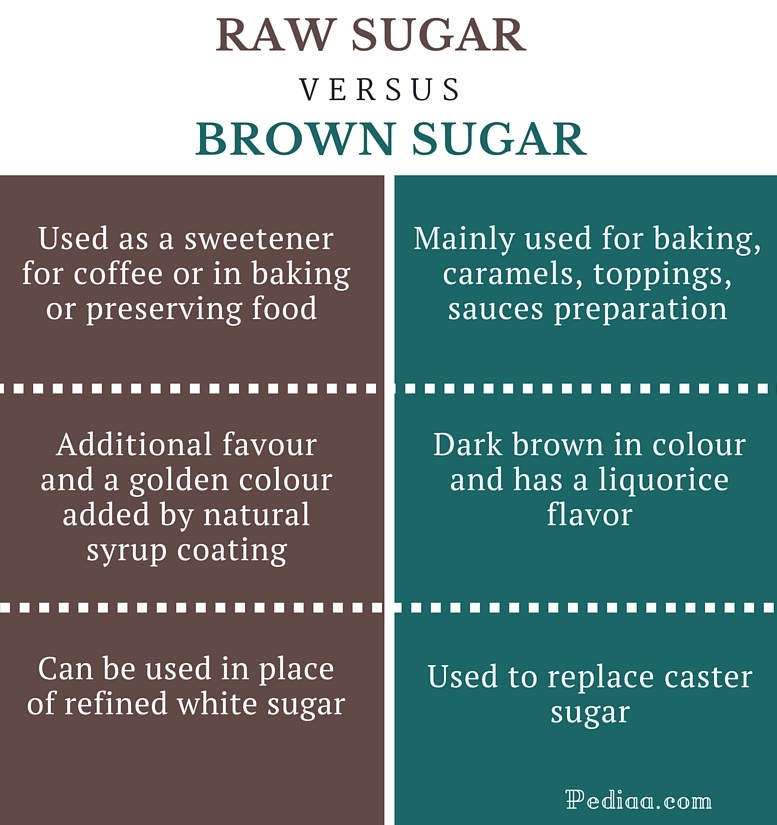 Magnuson, Torsten A. (1918). History of the Beet Sugar Industry in California. Annual Publication of the Historical Society of Southern California 11: 68–79.

“Raw Sugar” By Editor at Large – Own work (CC BY-SA 2.5) via Commons Wikimedia