Alternating currents change sinusoidally with time. Peak refers to the maximum value that the sinusoidally-varying current or voltage reaches. If the voltage

is expressed in the form

, then the peak voltage is

Peak-to-peak refers to the absolute value of the difference between maximum and minimum voltages. Peak-to-peak voltages are sometimes used to describe alternating currents. If the wave is sinusoidal, then

Since the voltage in an AC current varies sinusoidally, if we are to take the average voltage, we would get an answer of zero: 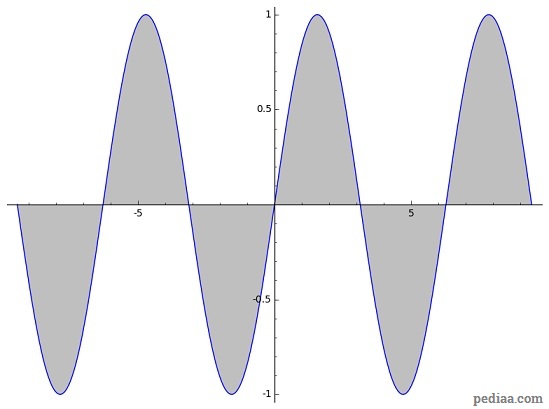 The area under a sin curve averages out to be 0.

Instead, we square the current. Now, the average of the squared current is not 0, but a half: 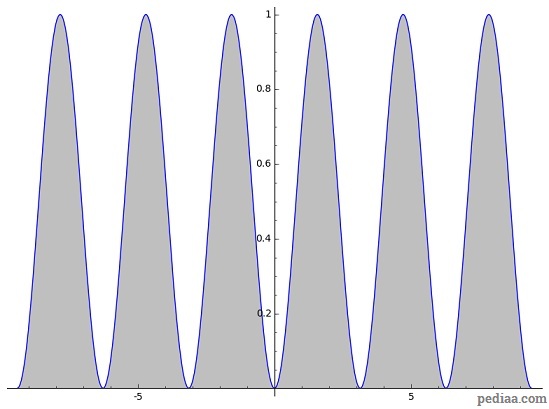 A sin squared curve. This has an average at 1/2.

Suppose a voltage is expressed as

Suppose we want to find the average value of

. As we discussed earlier, one approach would be to first square the voltage. We do this now to both sides of the equation:

Next, we take the averges from both sides of the equation. The average of

If we want to find the mean voltage, then we take the square roots:

The figure below illustrates the peak, peak-to-peak and RMS voltages in an alternating current. 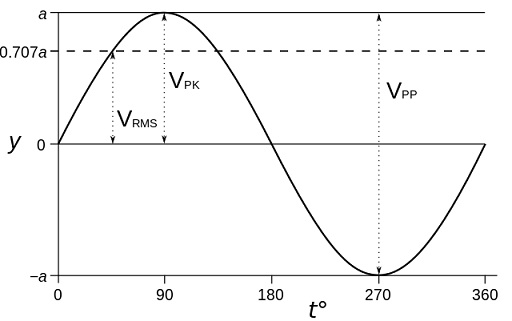 . In terms of the RMS current, the average power is given by

Difference Between RMS and Peak

When a voltage value for an AC current is quoted, it is usually the RMS value that is quoted.

“Graph of a sine wave voltage versus time (in degrees of angle) with RMS, peak, and peak-to-peak marked.” by AlanM1
(Derived from File:Sine wave 2.svg by en:User:Booyabazooka (CC0-licensed)) [CC0 1.0], via Wikimedia Commons