What is a Solenoid

A solenoid refers to a wire coiled in a helical shape, as shown below:

for this uniform field can be given by:

is the number of turns in the coil,

is the current and

is the length of the solenoid.

is the permeability of free space, given by

term is replaced by

is the relative permeability of the material.

What is an Electromagnet

The simplest way to make an electromagnet is to make a solenoid, pass current through it and then place a piece of soft iron inside the solenoid. Due to the high relative permeability of soft iron, the magnetic field formed would be much stronger. Note that the wires need to be insulated: if they make direct contact with the iron core, the current will simply conduct through the iron core! Often, if you look at electromagnets found inside various appliances, it seems as though the copper wires are not insulated. However, in these cases they have been coated with an insulating material.

The rod of soft iron placed inside the solenoid would behave like an ordinary bar magnet when the current is switched on. The polarity of this electromagnet can be described by the right-hand grip rule. If you grip the solenoid so that your fingers curl around in the direction of current flow through the turns of the solenoid, your thumb will point to the “North” pole of the electromagnet. 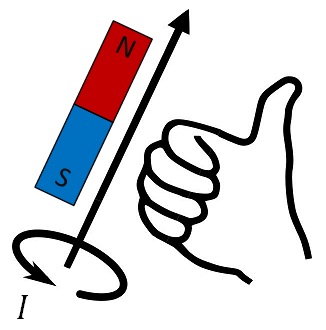 Difference Between Solenoid and Electromagnet

A solenoid is a long, thin helical loop of wire.

An electromagnet is a magnet whose magnetic properties depend on an electric current.

If a solenoid is made to conduct a current, it would become an electromagnet.

However, wires forming an electromagnet do not necessarily need to have a solenoid shape.

“A three-dimensional rendering of a solenoid.” by Zureks (Transferred from en.wikipedia to Commons) [Public Domain], via Wikimedia Commons