Home » Technology » IT » Database » Difference Between Stack and Queue

In Computer Science, stack and queue are two abstract data types that are simple data structures that use pointers to represent dynamic sets. However, a difference can be noted between them based on their implementations. Basic operations of inserting and deleting elements are supported by both stack and queue. The main difference between Stack and Queue is that a stack implements Last In First Out or LIFO policy, whereas a queue implements First In First Out or FIFO policy.

The push operation adds an element to the top of the collection. Performing a pop operation removes an element that is at the top of the collection. Since the elements that are removed from the stack are in reverse order to the order of their addition, the structure is known to follow Last In First Out or an LIFO approach. Given this implementation, the lowest elements have been on the stack for the longest.

A stack is considered as a restricted data structure due to the small number of operations that can be performed on a stack. Additionally, a peek operation can be implemented to return the value of the top element without modifying the element. Also, implementations of a stack often have an IsEmpty function to check whether the stack is empty. In environments that rely heavily on stacks, functions like delete, swap/exchange and rotate may also be provided. But these are not essential for the basic functionality of a stack.

A stack can be easily implemented using arrays or linked lists in most high-level programming languages. 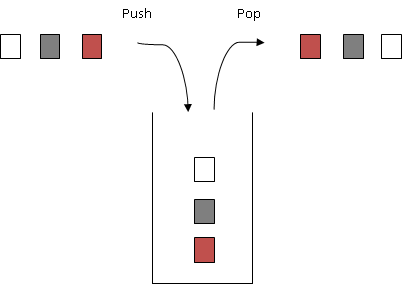 When an element is enqueued, it is added to the tail of the queue. Performing a dequeue operation will remove an element from the head of the queue. Since the enqueued elements are always dequeued in the same order as they were enqueued, the structure is said to implement a First In First Out or FIFO approach.

Similar to a stack, a queue is also a restricted data structure given the small number of operations that can be carried out. In addition, a peek operation can be implemented in a queue, which will return the value of the element at the head of the queue without dequeuing it. Other primitive operations on a queue may include IsEmpty, IsFull, and display. The IsEmpty function checks whether the queue is empty and IsFull check if the queue is full. The display function can be used to present the content of the queue. But again, these functions are not critical for the implementation of a queue.

The type of queue may differ on how enqueuing and dequeuing operations are performed on elements. Circular queue, priority queue, and double-ended queue are the special types of queues.

Difference Between Stack and Queue

In a stack, operations on data can be performed only at the top of the stack.

In a queue, both ends of the queue are accessible for operations. An insertion takes place at the tail of the queue, and a deletion can be made at the head.

A stack is an LIFO data structure, where the element that was added last to the stack is the first element to be removed. The removal is in reverse order to the order of addition.

A queue is an FIFO data structure, where the element that was added first to the queue will be the first element to be removed. Order of insertion and removal are the same.

In a stack, an element is inserted at the top of the stack and removed from the top as well.

But in a queue, an element is inserted at the end of a queue and is removed from the front.

A stack has a bounded capacity.

A queue can be of bounded capacity, but is usually implemented without a specific capacity.

Since a stack only needs one pointer to keep track of the top of the stack, there is no wastage of memory space.

A queue needs two pointers ‘front’ and ‘rear’ to keep track of both ends of the queue. Therefore, there is wastage of memory space.

Both stack and queue are used for the purpose of maintaining ordered lists of elements. While a stack is an LIFO data structure, a queue implements an FIFO approach. Only one end of a stack is accessible for principal operations, but both ends of a queue can be used.