What is Static Electricity

The like charges repel each other while unlike charges attract. If you rub a polythene rod with a piece of cloth, some electrons from the cloth get transferred onto the rod, making the rod negatively charged. If you bring the rod close to a slow, steady stream of water from a tap, you can see that the water moves towards the rod. This is because the negative charges in water move away from the polythene rod, making the water closer to the polythene rod more positive. Since like charges attract, the water stream now bends towards the rod. A demonstration of this effect is shown in the video below:

Sometimes, though, if there is a large number of excess charges the repulsion is so high that electrons have enough energy to flow through an insulator. This is what happens during a lightning strike. Thunderclouds become charged as they rub against each other in the atmosphere. If enough charges build up in the cloud, electrons can flow between the ground and the cloud in order to neutralize the cloud. The discharge of electrons is rapid, and this is what we experience as lightning.

Van de Graaff generators are also used to demonstrate static electricity. In these, there is a rubber belt that rubs against a brush to create charges. These charges get accumulated on a dome. If a person touches the dome while standing on an insulator, their hair “stands on end” because their hair gets charged by the same charge and starts repelling. If a small metal sphere is brought very close to a charged Van de Graaff generator, the excess charges get transferred quickly in the form of a spark. This process is the same as what happens during lightning. 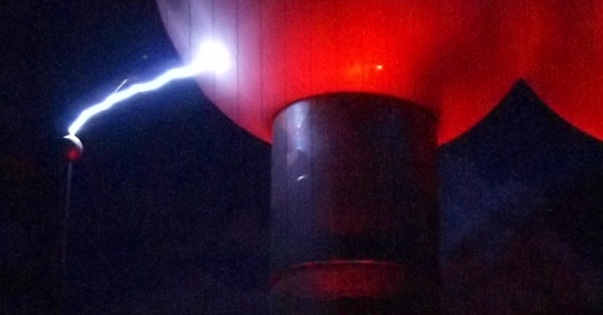 The dome of a Van de Graaff generator discharging

What is Current Electricity

, then the electric current

There are two main types of current: in direct current, the potential difference driving the current maintains its direction. Consequently, electrons continually flow along one direction. In alternating current, the potential difference is constantly made to change direction and, in response, electrons are also moving back-and-forth. As electrons flow, they give out their energy. Electrical devices work by making use of this energy given off by electrons.

Difference Between Static and Current Electricity

In static electricity, there is an excess of one type of charge in a region. However, there is no net flow of charge.

In current electricity, charges flow in response to a potential difference.

In static electricity, the discharges happen when a large enough charge accumulates. It is not possible to maintain a constant flow of charge without giving time for the material to accumulate charges again.

In current electricity, we can maintain a constant flow of current by giving energy to the system.

Magnetic fields do not form around material charged with static electricity.

Since current electricity consists of flowing charges, a significant magnetic field forms around the conductor carrying the current.

“Spark by Van de Graaff generator at Museum of Science in Boston, Massachusetts” by Z22 (Own work) [CC BY-SA 4.0], via Wikimedia Commons