Difference Between Stevia and Truvia

Many commercially produced sweeteners are marketed as safe alternatives to refined sugar. Because of that there seems to be a lot of confusion over the difference among these sweeteners.  Both Stevia and Truvia are two such sweeteners. Stevia is a natural sweetener obtained from the leaves of Stevia Rebaudiana. Truvia is a mixture of natural sweeteners that consists of at least two ingredients including Stevia. Further, Truvia has stevia as its major component, but it also comprises the chemical erythritol. This is the main difference between Stevia and Truvia. In this article, let’s discuss the difference between stevia and truvia in terms of their intended uses as well as chemical and physical properties. Then we can identify which one is safer and more beneficial for health. 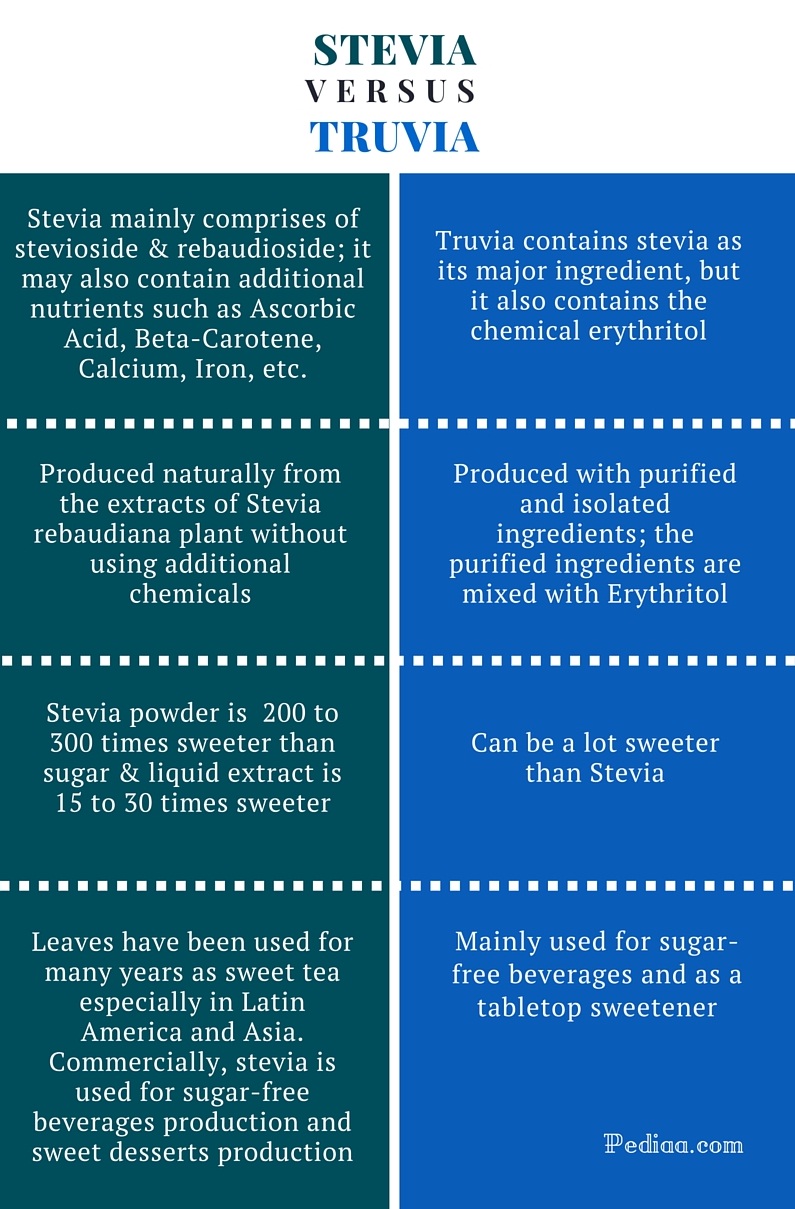 Stevia is a natural sugar substitute extracted from the leaves of the Stevia rebaudiana plant. This plant is a low-growing bush naturally grown and cultivated in South America and in Asia. The active chemical compounds of stevia are steviol glycosides that comprise primarily stevioside and rebaudioside. These chemical compounds have up to 150 times the sweetness taste compared to sugar. In addition, they are stable over a wide range of temperatures, and  are not fermentable.

Steviosides does not increase the blood glucose after ingestion, which makes stevia ideal substance in the production of sugar-free or diet alternative food products. Stevia does not lead to conditions such as tooth decay or gum disease. Stevia is a non-nutritive sweetener because it cannot be broken down by the body, so it does not contribute to caloric content. Stevia does not have a glycemic index and does not trigger blood sugar rises. Moreover, the human body does not require insulin to metabolize it. Stevia is approved by the U.S. Food and Drug Administration (FDA) and the European Food Safety Authority. 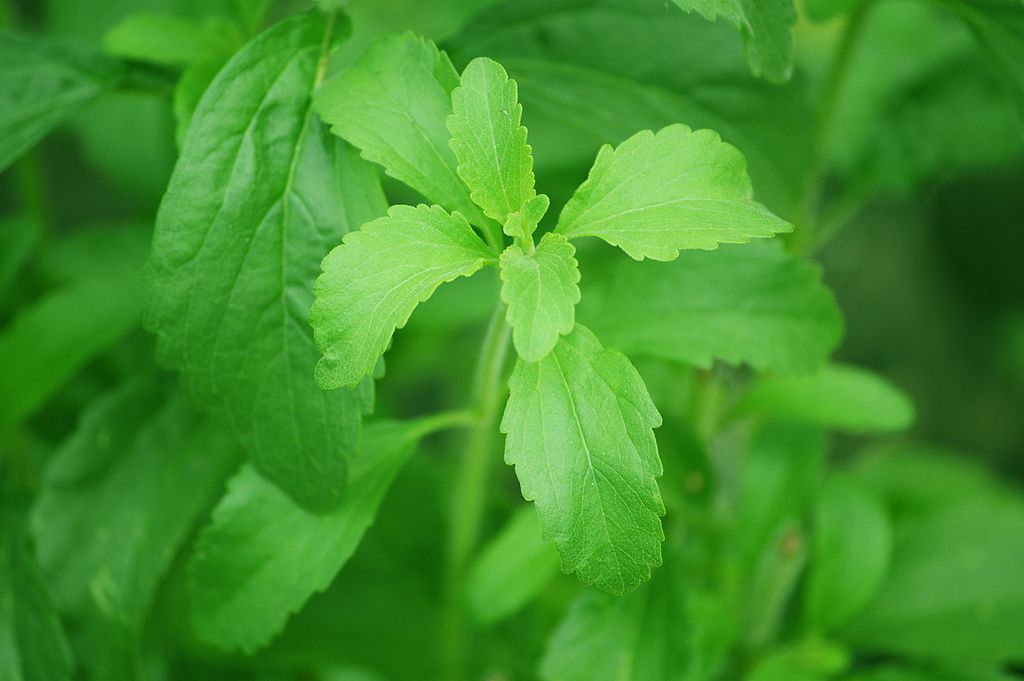 Truvia is a stevia-based sugar substitute. It is marketed as a truvía tabletop sweetener as well as a food ingredient. It was created jointly by The Coca-Cola Company and Cargill.  Chemically, truvia is synthesized of stevia, rebiana, erythritol, and natural flavors. Erythritol is a sugar alcohol that is used as a bulking agent, and it is extracted from fruits like melons, pears and grapes and,  mushrooms, and from fermented products (cheese, soy sauce, and wine). It was introduced in 2008, and this natural sweetener has become the second best-selling sugar substitute in the United States. Truvia is considered to have the same health benefits as Stevia. 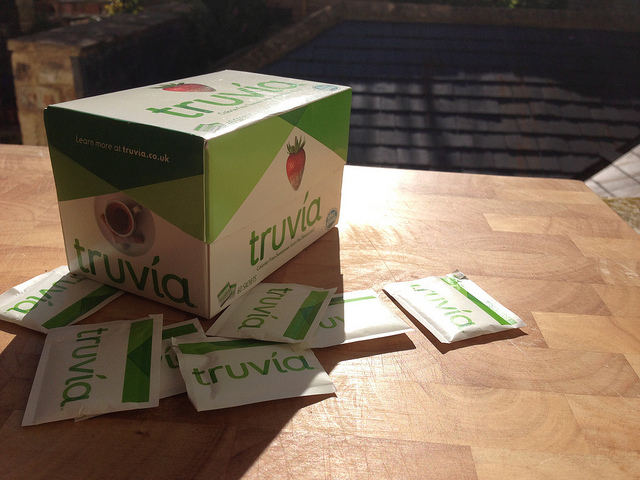 Difference Between Stevia and Truvia

The differences between stevia and truvia can be divided into following categories. They are;

Truvia contains stevia as its major ingredient, but it also contains the chemical erythritol. This chemical is a non-calorie natural sweetener that is incorporated to Stevia leaf extract to serve as a bulking agent because erythritol adds volume and texture to Truvia.

Stevia is produced naturally from the extracts of Stevia rebaudiana plant without using additional chemicals. The chemical process involved in extracting Stevia is much simpler and shorter compared to Truvia.

Truvia is produced with purified and isolated ingredients. The purified constituent of stevia leaf extract known as rebiana, or rebausdioside A; it is mixed with erythritol to produce Truvia.

Truvia can be a lot sweeter than Stevia.

Use as a Sweetener

Stevia leaves have been used for many years as sweet tea especially in Latin America and Asia. Commercially, stevia is used for sugar-free beverages production and sweet desserts production.

Truvia is mainly used for sugar-free beverages and as a tabletop sweetener.

In conclusion, both stevia and truvia are marketed as natural substitutes for high-calorie table sugar. They are considered healthier options compared to artificial sweeteners like aspartame, neotame, and acesulfame potassium.

“Truvia Stevia” by Health Gauge (CC BY 2.0) via Flickr