and the area of the surface is

Strain measures the amount of relative deformation caused by a force acting on an object. For simplicity here, we will only consider the normal strain, created by normal stress. Suppose the original length of the object is

and due to stress, the length changes to

. The change in length is

is then given by,

Since strain is given by a fraction where the numerator and denominator both have units of length, the strain itself has no units. i.e. it is a “dimensionless quantity”. It is common to see strain expressed in terms of percentages.

We can draw a graph of how the strain in a body changes as we vary the stress acting on the object (this can be done, for example, by adding weights). These graphs, called stress vs. strain curves, reveal lots of information about the nature of the material that the object is made of. The figure below shows the typical stress-strain curve for a ductile material (“ductile” means that the material can be stretched out well): 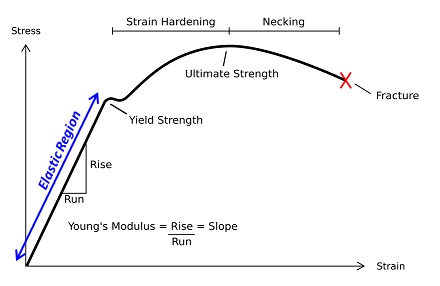 Stress-strain curve for a ductile material

The gradient of the elastic region of the curve is called the Young Modulus. This is a very important number for materials engineers, as it gives how much strain would be caused by a given stress in a material.

Difference Between Stress and Strain

Stress gives the force acting per unit area of an object.

Strain gives the relative change in length due to deforming forces.

Stress is measured in pascals (Pa).

Strain has no units; it is simply a ratio.