Sugar and honey are two of the most consumed sweeteners in the world.  These sweeteners are mainly used as a food ingredient for the production of confectionery products. The table sugar or granulated sugar is chemically known as sucrose, and it is a disaccharide made out of fructose and glucose monomer units. Honey is a sweet food made by bees using nectar from flowers. This is the main difference between sugar and honey. Granulated sugar crystals are mainly derived from plant sources such as sugar cane or sugar beet. In contrast, honey is produced by insects such as bumblebees, stingless bees, and honey wasps. These honey bees convert nectar into honey by a mechanism of spitting out and evaporation. Honey is stored in wax honeycombs inside the beehive, and it is the primary food for bees. Honey contains monosaccharides fructose and glucose and has about the more or less similar sweetness as granulated sugar. Although both sugar and honey belong to the sweeteners group, sugar and honey have different sensory and nutritional properties, and this article explores the difference between sugar and honey.

Sugar is the widespread name for sweet, short-chain, soluble carbohydrates such as the monosaccharide, disaccharides, or oligosaccharides. They are composed of carbon, hydrogen, and oxygen. However, sugar generally is referred to as table sugar or granulated sugar that is chemically known as sucrose. These granulated sugars are produced using the tissues of sugarcane or sugar beet. Excess consumption of sugar is associated with detrimental health effects. Sugar has been associated with medical conditions like obesity, diabetes, cardiovascular disease, dementia, macular degeneration, and tooth decay. 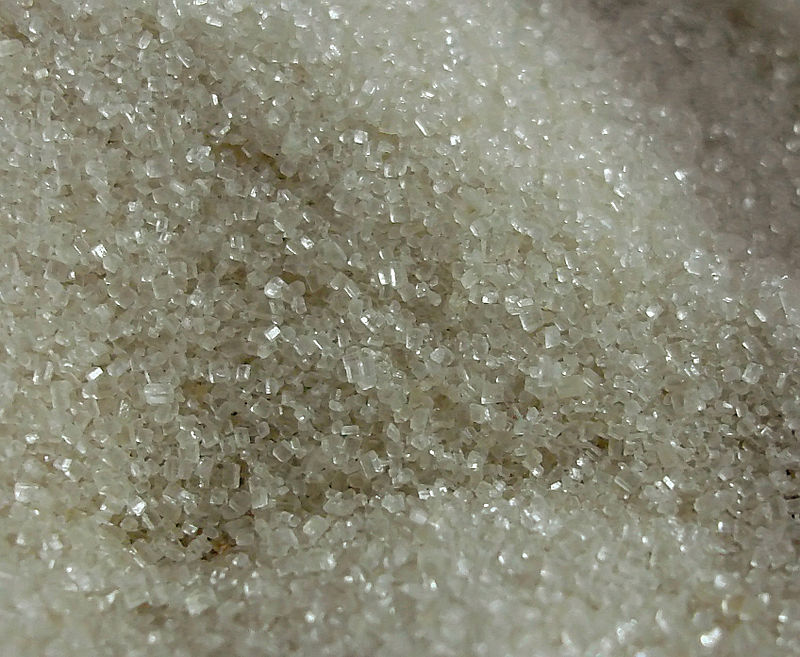 Honey bees transform flower nectar into honey, and this honey is the major source of food for the bees. It is store inside wax honeycombs of the beehive. Honey gets its sweetness from the monosaccharides fructose and glucose. It is mainly used for baking due to its distinctive flavor and color. Honey has a very low water activity (less than 0.6) and thus it is less susceptible to the growth of microorganisms. But honey sometimes comprises dormant endospores of the Clostridium botulinum. These spores can be dangerous to infants because the endospores can transform into toxin-producing bacteria in infants’ immature intestinal tracts, leading to illness or death. In addition, people who have a weakened immune system should not consume honey due to the risk of bacterial or fungal infection.  Honey is a major calorie source, and it does not contain significant nutrient content. Honey utilization and production have a long and diverse history. Honey gathering is a prehistoric activity and cave paintings in Valencia, Spain indicate that people started gathering honey at least 8,000 years ago. 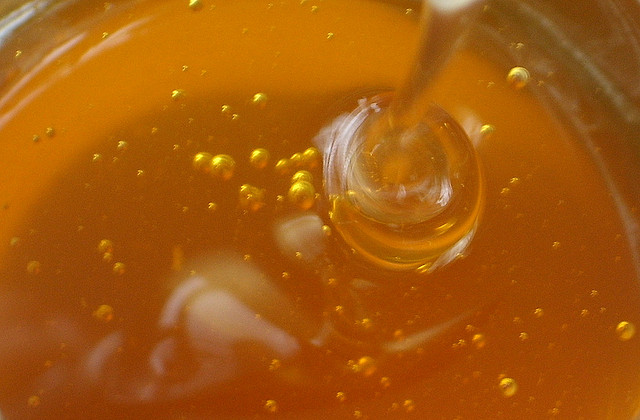 Difference Between Sugar and Honey

Sugar and honey may have substantially different sensory properties, nutrients, and applications. These differences may include,

The table or granulated sugar is chemically known as sucrose. However, scientifically sugar refers to a number of carbohydrates, such as monosaccharide, disaccharides, or oligosaccharides.

Honey is a sweet food made by bees using nectar from flowers.

Sugar is produced by the stems of sugar cane and roots of sugar beet. Sugarcane (Saccharum spp.) is a perennial grass in the family Poaceae. Sugar beet (Beta vulgaris) is a biennial plant in the Family Amaranthaceae. The tuberous sugar root contains a high proportion of sucrose.

Honey is produced by insects of the genus Apis, bumblebees, stingless bees, and other hymenopteran insects such as honey wasps.

Sugar is synthesized in the plant as a result of the photosynthesis process.

Honey bees convert flower nectar into honey by a process of spitting out and evaporation.

Sugar provide food and energy for metabolism of the plant.

Honey is the primary food source for bees.

The five largest sugar producers in the world are Brazil, India, the European Union, China, and Thailand.

The five largest honey producers in the world are China, Turkey, Argentina, Ukraine, and Russia.

Fructose and glucose are predominant sugar found in honey

Sugar is classified based on the color such as white sugar or brown sugar.

Honey is categorized by the floral source of the nectar. These groups are, blended honey (a mixture of two or more honey in floral source), wildflower honey (derived from the nectar of many types of flowers) and Monofloral honey (the nectar of one type of flower).

Honey is used for following applications;

Consumption of sugar does not cause any allergic reactions and sugar is rarely susceptible to the growth of pathogenic microorganisms.

Honey may contaminate with dormant endospores of the bacterium Clostridium botulinum, which can be hazardous to infants.

Sugar is a significant part of the human diet and provides food energy. An average of 24 kilograms of sugar is equal to over 260 food calories, and 25.1 kg of sugar is  consumed annually per person of all ages. The main nutrient in the sugar is carbohydrate (sucrose) only.

Thus, the World Health Organization (WHO) recommends that both adults and children decrease the consumption of free sugars to less than 10% of total energy intake.

Honey is not associated with detrimental health outcomes compare to sugar. In addition to that, there is some evidence that honey may contribute healing in skin wounds after surgery and mild burns when used in a dressing. Also, very little proof supports honey as a treatment of coughs in children.

In conclusion, both sugar and honey are essential culinary ingredients, and both have a lot of similar applications. But they are derived from two different ways and honey is originated from insects whereas sugar is derived from plants.

Carbohydrate quantity and quality and risk of type 2 diabetes in the European Prospective Investigation into Cancer and Nutrition–Netherlands (EPIC-NL) study”. American Journal of Clinical Nutrition, 92, 905–911.

Kántor, Z., Pitsi, G. and Thoen, J. (1999). Glass Transition Temperature of Honey as a Function of Water Content As Determined by Differential Scanning Calorimetry. Journal of Agricultural and Food Chemistry, 47 (6): 2327–2330