What is Surface Tension

Consider a sample of liquid in a container. The liquid is held together by the cohesive intermolecular forces between the molecules that make up the liquid. A molecule inside the container is being pulled in all directions by the other molecules that surround it. However, if you consider molecules at the top surface, the molecules below them are still pulling them down but there are no liquid molecules above them to pull them upward. This means that there is a net downwards force on these molecules. As a result, the entire surface of the liquid is being pulled inward. It is this inward force on the surfaces that causes liquids to form roughly spherical droplets when they are free. 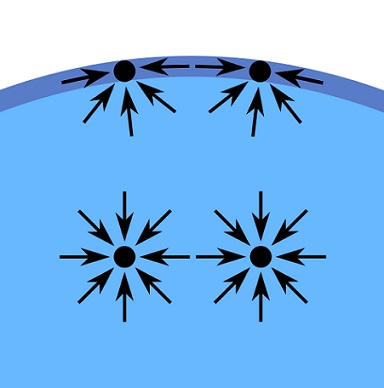 Molecules on the surface of a liquid are exposed to cohesive forces from below them. This makes liquid surfaces to be pulled inward. 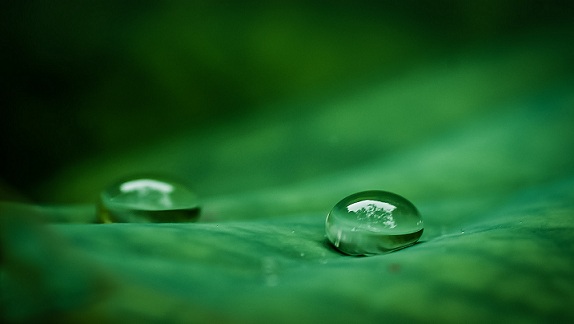 The surface of the liquid acts like a membrane under tension. Surface tension

can be quantified as the force

acts parallel to the liquid surface and

is the length over which the force acts. For instance, imagine pulling a film of liquid and stretching it. This is shown in the diagram below: 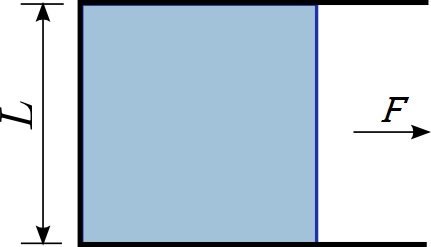 Surface tension on a film of liquid

pulls on the membrane shown in dark blue, stretching the liquid film. Since there are two surfaces in the film (top and bottom surfaces), the total length is

. This means that for this film,

What is Surface Energy

. Then, the work done is

. The increase in the surface’s area is given by

. So, the surface energy

“Wasser in Tropfen und an der Phasengrenze” by User:Booyabazooka (Own work) [Public Domain], via Wikimedia Commons

“This diagram illustrates the force necessary to increase the surface area…” by Rudolf.hellmuth (Own work) [CC BY-SA 3.0], via Wikimedia Commons (Modified)