1.What is Typhoid Fever?
– Cause, Signs and Symptoms, Transmission, Diagnosis, Treatment

2. What is Paratyphoid Fever?
– Cause, Signs and Symptoms, Diagnosis, Treatment

3. What is the difference between Typhoid and Paratyphoid Fever? 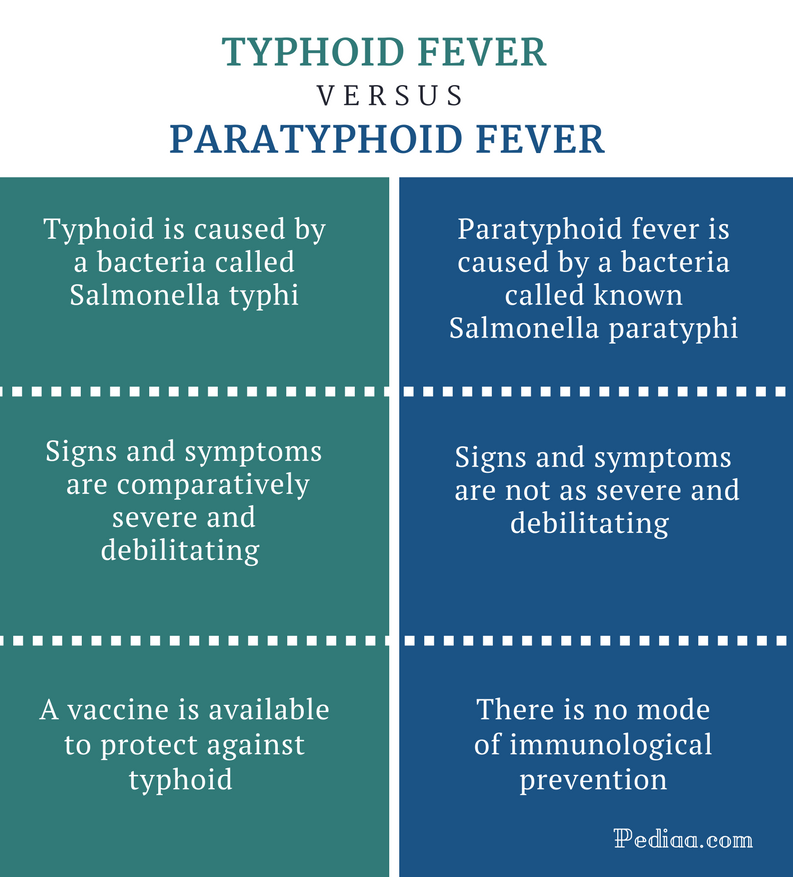 What is Typhoid Fever

Also known as enteric fever, typhoid is an acute medical condition which is caused by a bacteria called Salmonella typhi. It has a higher chance of getting complicated into a fatal condition, invading almost all the systems in the body; thus, it is termed as a multi-systemic illness.

Cause of Typhoid Fever

The causative bacteria Salmonella typhi is particularly seen in overcrowded areas with poor sanitary facilities and social chaos. It gets into the individual’s bloodstream through contaminated food and water.

After the initial invasion of the small intestine, these bacteria will slowly enter the bloodstream, get multiplied inside liver, spleen and bone marrow cells, before re-entering into the blood circulation and spreading all over the body-gall bladder, biliary system, lymphatic system, etc.

Signs and Symptoms of Typhoid Fever

Patients affected with typhoid fever will experience a broad range of signs and symptoms, making the clinical diagnosis quite confusing and vague. The manifestation of symptoms will take place about 1-2 weeks (incubation period) within the exposure and commonly seen features of the illness include,

Untreated patients will deteriorate progressively within a small period of time, resulting in confusion, delirium, obtundation, intestinal haemorrhage and bowel perforation. Unfortunately, some patients with typhoid fever can even end up dead within 1 month after the initial onset, especially when appropriate treatments are not carried out shortly and promptly.

Furthermore, survivors can be left with chronic and permanent complications such as neuropsychiatric disturbances-fits, seizures and delirium.

Your GP will take a complete history about the onset of signs and symptoms, previous travel history and unhygienic food or beverage consumption before coming into a rough diagnosis. However, the diagnosis will be confirmed only after doing a stool analysis and culture with a full blood count and culture to establish any ongoing infection in the body.

Once the diagnosis of Typhoid fever is confirmed, the patient will be started on Antibiotics, covering the responsible bacteria along with symptomatic treatment and adequate hydration. A vaccine has been developed against typhoid fever which can be injected before travelling to high-risk areas.

According to recent research studies, about 3-5% of patients recovered from the acute illness are known to act as carriers, who have a potential to transmit the disease to others through faeco-oral pathways. 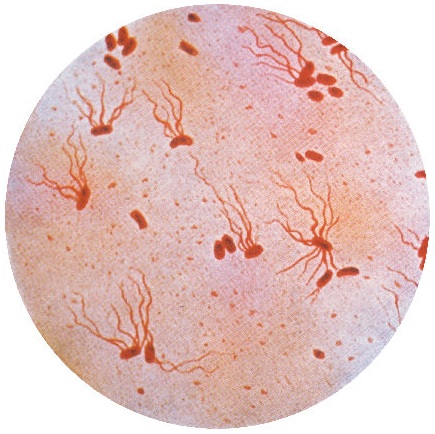 What is Paratyphoid Fever

This is a condition which is caused by the bacteria, Salmonella paratyphi. It mainly affects the gastrointestinal system yet with time invades most of the organs and systems in the body.

Cause, Signs and Symptoms, Diagnosis and Treatment of Paratyphoid Fever

The pathophysiology, risk factors and causative agents of this illness are exactly similar to those of Typhoid fever and signs and symptoms are comparatively quite milder with an onset of about 1-10 days after the initial ingestion (incubation period).

Major investigations such as stool full report, stool culture, full blood count and blood culture are mandatory to be carried out in order to establish the exact diagnosis, and specific Antibiotic treatment against the identified bacterial agent-salmonella paratyphi can be initiated after the diagnosis.

It is important to consider about supportive treatment such as,

Unfortunately, there is no vaccine, developed against Paratyphoid fever, yet.

Difference Between Typhoid and Paratyphoid Fever

Both these conditions are very similar to each other in the aspects of pathophysiology, transmission and management yet signs and symptoms of typhoid are comparatively severe and debilitating than those of paratyphoid fever.

The causative bacterial agent of typhoid fever is Salmonella typhi whereas the etiology of paratyphoid fever is salmonella paratyphi. Both these bacteria are of the same species yet the latter is less invasive in nature.

As far as the preventive measures of these two ailments are considered, there is a vaccine developed against salmonella typhi, and there isn’t any mode of immunological prevention against salmonella paratyphi. However, with time, there will vaccines available for the latter as well, giving rise to a better prevention.

“Salmonella typhosus, cause of typhoid fever” by Kat Masback (CC BY-SA 2.0) via Flickr