Both X-Rays and gamma rays refer to waves in the electromagnetic spectrum. Due to the principle of wave-particle duality, these waves can also be thought of as “particles” called photons.  X-rays typically have longer wavelengths than gamma, but this is not always the case: sometimes, waves of similar wavelengths may be referred to as “X-rays” or “gamma”. There is no consensus on how to precisely differentiate between X-rays and gamma rays. However, they are often differentiated using their origin. In this sense, the main difference between X-rays and gamma rays is that gamma rays are produced during nuclear decay by nuclei of atoms, whereas X-rays are produced by electrons. For instance, for medical purposes, X-rays are produced by accelerating some electrons and then making them collide with a metal target.

In the electromagnetic spectrum, X-rays sit between ultraviolet and gamma waves. X-rays are ionizing, so exposure to X-rays could technically cause cancer. However, the chance of this happening when one is exposed to low intensities of X-rays infrequently is very low.

Most of us are familiar with he use of X-rays for medical imaging. When a photographic film is exposed to X-rays, the film darkens. X-rays can pass through the human body, but different parts of the human body absorb X-rays by different amounts. For instance, bones absorb X-rays more than the tissues that surround them. So, when X-rays are made to pass through the body and then onto a photographic plate, an image will be formed, depending on how much the X-rays get absorbed as they travel through different parts of the body. 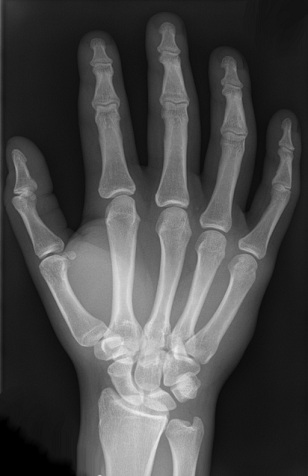 An X-ray photograph of a human hand

What are Gamma Rays

Gamma rays are typically more energetic than X-rays, so they have more ionizing power compared to X-rays. Gamma rays are used to sterilize medical equipment or to kill cancer cells in radiotherapy. Compared to alpha and beta radiation, they have a higher level of penetration, which makes gamma rays useful for medical imaging, as well. For imaging, a gamma source is introduced into the patient’s body and using a gamma camera, the gamma radiation coming out of the person’s body is detected. Cancer cells take up the gamma-emitting substance differently to normal cells, so using the gamma camera allows to locate the position of a cancer cell accurately. PET scans also depend on the detection of gamma rays.

Difference Between X-Rays and Gamma Rays

X-rays have a larger wavelength (and hence a smaller frequency) than gamma.