Alpha helix and beta plates are two different secondary structures of protein. Alpha helix is a right handed-coiled or spiral conformation of polypeptide chains. In alpha helix, every backbone N-H group donates a hydrogen bond to the backbone C=O group, which is placed in four residues prior. Here, hydrogen bonds appear within a polypeptide chain in order to create a helical structure. Beta sheets consist of beta strands connected laterally by at least two or three backbone hydrogen bonds; they form a generally twisted, pleated sheet. In contrast to the alpha helix, hydrogen bonds in beta sheets form in between N-H groups in the backbone of one strand and C=O groups in the backbone of the adjacent strands. This is the main difference between Alpha Helix and Beta Pleated Sheet.

What is an Alpha Helix

Proteins are made up of polypeptide chains, and they are divided into several categories such as primary, secondary, tertiary, and quaternary, depending on the shape of a folding of the polypeptide chain. α-helices and beta-pleated sheets are the two most commonly encountered secondary structures of a polypeptide chain.

Alpha-helical structure of proteins forms due to hydrogen bonding between its backbone amide and carbonyl groups. This is a right handed coil, which typically contain 4 to 40 amino acid residues in the polypeptide chain. The following figure illustrates the structure of alpha helix.

Hydrogen bonds form between an N-H group of one amino residue with a C=O group of another amino acid, which is placed in 4 residues earlier. These hydrogen bonds are essential to creating the alpha helical structure, and every complete turn of the helix has 3.6 amino residues.

Amino acids whose R-groups are too large (i.e. tryptophan, tyrosine) or too small (i.e. glycine) destabilize α-helices. Proline also destabilizes α-helices due to its irregular geometry; its R-group bonds back to the nitrogen of the amide group, and causes steric hindrance. In addition, the lack of a hydrogen on Proline’s nitrogen prevents it from participating in hydrogen bonding. Apart from that, the stability of alpha helix depends on the dipole moment of the entire helix, which is caused due to individual dipoles of C=O groups involved in hydrogen bonding. Stable α-helices typically end with a charged amino acid to neutralize the dipole moment. 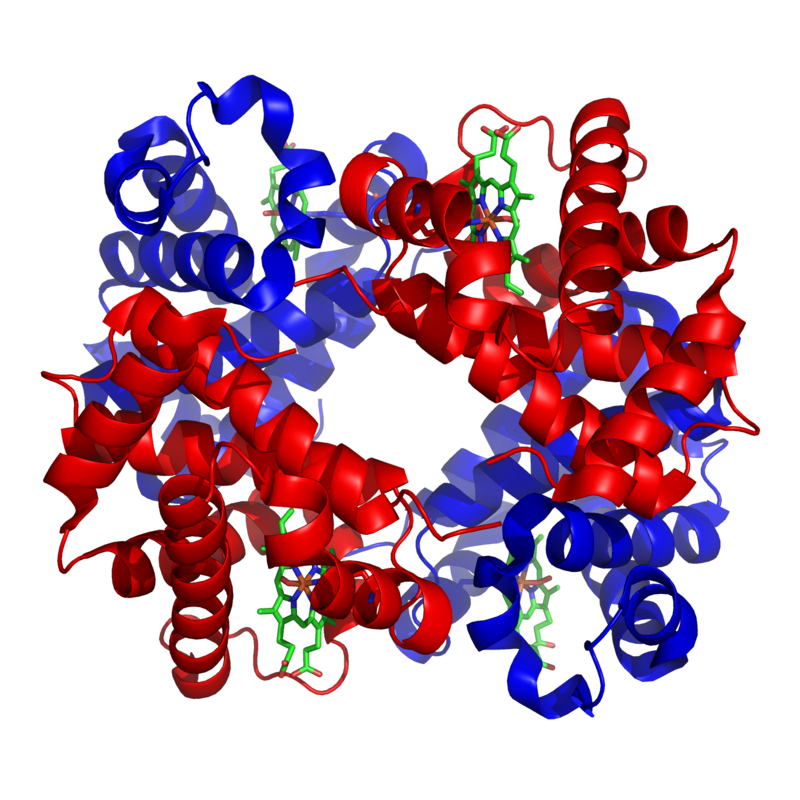 A Hemoglobin molecule, which has four heme-binding subunits, each made largely of α-helices.

What is Beta Pleated Sheet

Beta pleated sheets are another type of protein secondary structure. Beta sheets consist of beta strands connected laterally by at least two or three backbone hydrogen bonds, forming a generally twisted, pleated sheet. Generally, a beta strand contains 3 to 10 amino acid residues, and these strands are arranged adjacent to other beta strands while forming extensive hydrogen bond network. Here, N-H groups in the backbone of one strand create hydrogen bonds with the C=O groups in the backbone of the adjacent strands. Two ends of the peptide chain can be assigned to the N- terminus and C- terminus in order to illustrate the direction. N- terminus indicates one end of the peptide chain, where free amine group is available. Similarly, C- terminus represent the other terminal of peptide chain, where free carboxylic group is available. 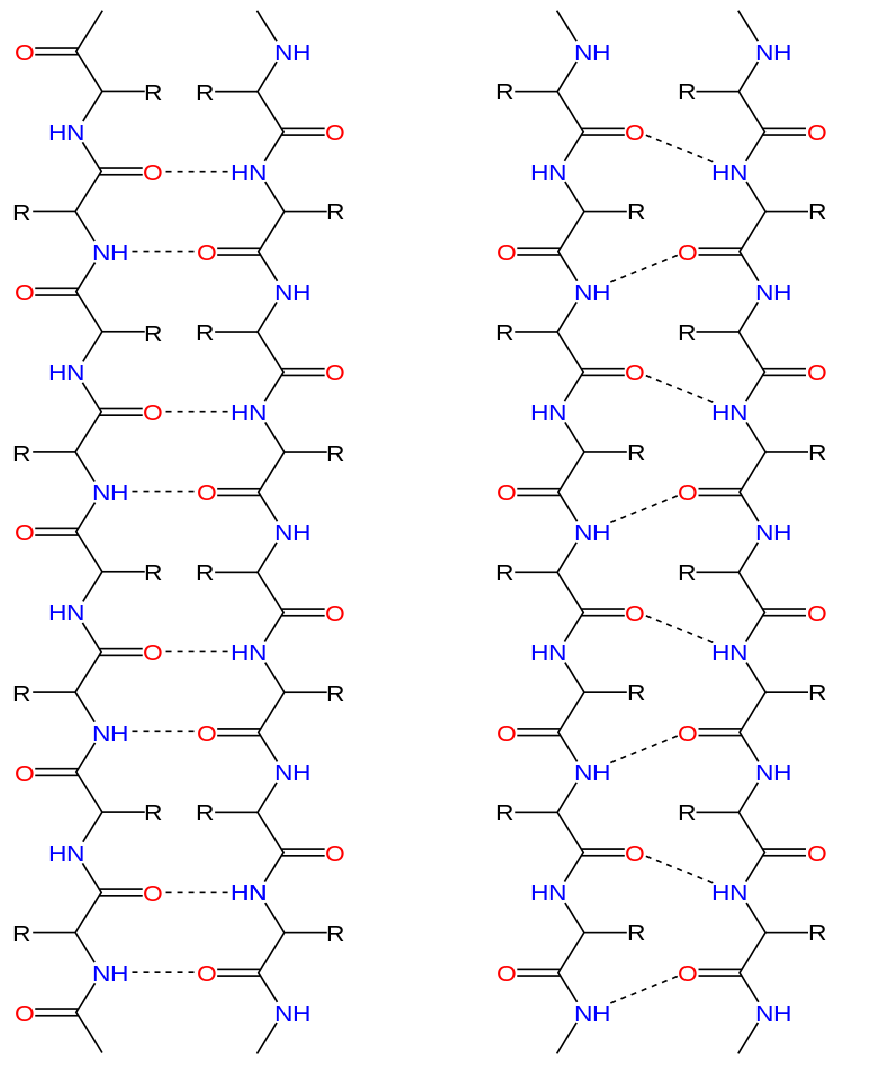 a) anti parallel
b) parallel

Alpha Helix: Hydrogen bonds form within the polypeptide chain in order to create a helical structure.

Alpha Helix: Alpha helix has n + 4 H-bonding scheme. i.e. Hydrogen bonds form between N-H group of one amino residue with C=O group of another amino acid, which is placed in 4 residues earlier.

Beta Pleated Sheet: Hydrogen bonds are formed in between the neighboring N-H and C=O groups of adjacent peptide chains.

Alpha Helix: -R groups of the amino acids are oriented outside of the helix.

Beta Pleated Sheet: -R groups are directed to both inside and outside of the sheet.

Alpha Helix: This can be a single chain.

Beta Pleated Sheet: This cannot exist as a single beta strand; there are must be two or more.

Alpha Helix: This has only one type.

Beta Pleated Sheet: This can be parallel, anti-parallel or mixed.

Alpha Helix: 100o rotation, 3.6 residues per turn and 1.5 Ao rise from one alpha carbon to the second

About the Author: Nuwa

Nuwa has a B.Sc. special degree in Chemistry. She is currently a teaching assistant at Open University, where she teaches, researches, and writes chemistry content. She has worked previously as a Chemical Analyst.