Home » Health » Drugs and Nutrients » Difference Between Antipsychotic and Antidepressant

Antipsychotics and Antidepressants are two popular categories of drugs which are used to treat mentally ill patients with varying degree of severity. However, it is important to know of each type in order to achieve the maximum benefits out of them and to avoid unnecessary negative effects. The main difference between antipsychotic and antidepressant is that antipsychotics control episodes of psychosis characterized by delusions and hallucinations whereas antidepressants uplift the mood of individuals affected by depression.

1. What is Antipsychotic – Use, Types, Mechanism of Action, and Side Effects

2. What is Antidepressant – Use, Types, Mechanism of Action, and Side Effects

3. What is the Difference Between Antipsychotic and Antidepressant 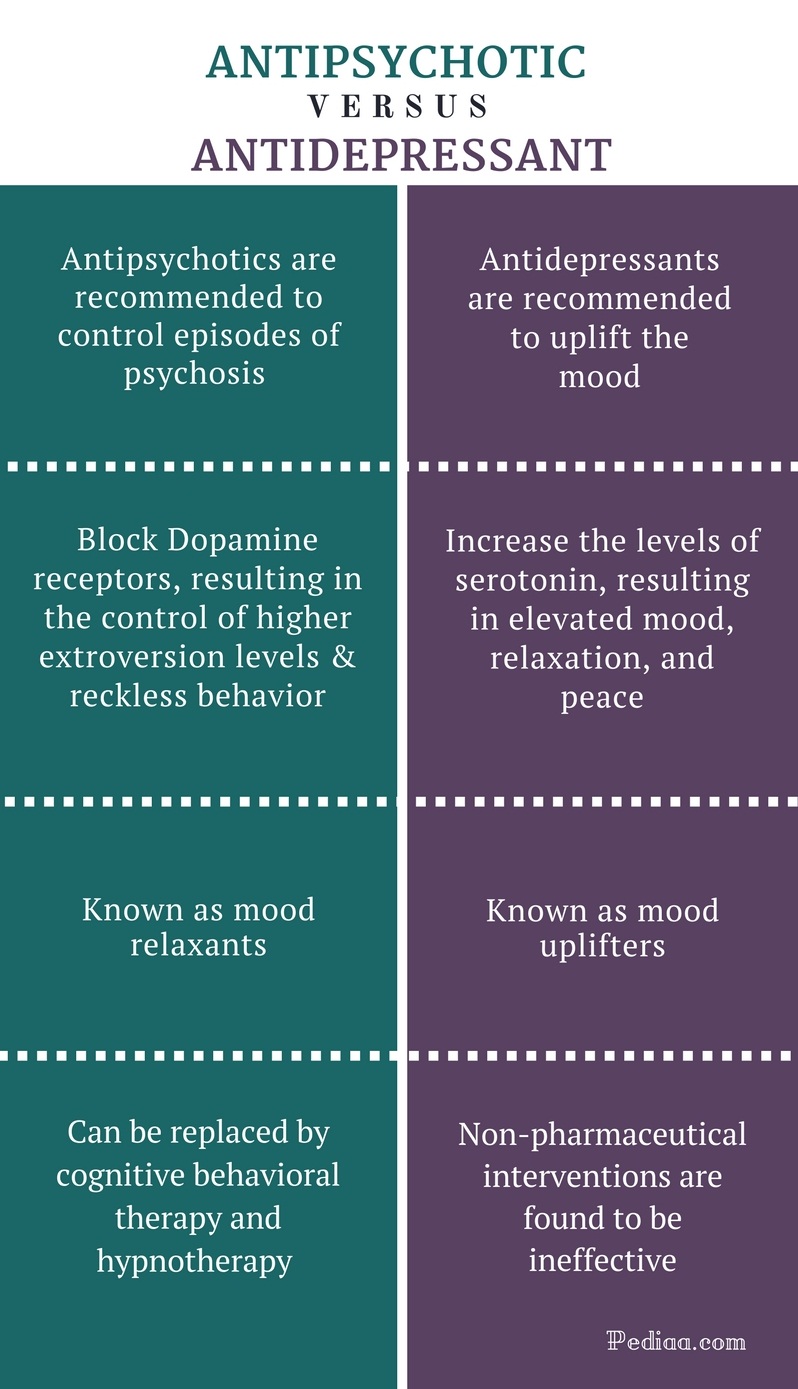 Antipsychotics are a class of drugs which are primarily used to treat psychotic disorders including hallucinations, delusions, paranoia and bipolar disorder by blocking a specific subtype of Dopamine 2 receptor, which is the chemical in our brain, responsible for controlling reward-driven learning.

Older antipsychotics, also known as conventional antipsychotics, have been created to block the D2 receptors in mesolimbic pathway thereby resulting in the improvement of positive symptoms. Unfortunately, these types tend to block D2 receptors located in areas out of the mesolimbic pathway as well, leading to a worsening of negative symptoms associated with various mental conditions.

Therefore, this conventional type of drugs including Chlorpromazine, Haloperidol, Fluphenazine, etc., should be used very cautiously.

The other type of antipsychotics, referred to as ‘Atypical antipsychotics’ are known to block both D2 receptors and 5HT2A receptors (a subtype of serotonin receptors), improving both positive and negative symptoms of psychotic conditions. Commonest atypical anti­psychotics include Clozapine, Risperidone, and Olanzapine.

The therapeutic benefits of antipsychotics will be achieved immediately-months depending on different drug types.

As far as the main side effects of antipsychotics are considered, D2 receptor blocking agents can give rise to tremors, restlessness, muscle spasms, sexual dysfunction and rarely tardive dyskinesia (repetitive, involuntary, purposeless movements) whereas atypical antipsychotics can result in unusual weight gain, diabetes, and disorders of lipid metabolism. 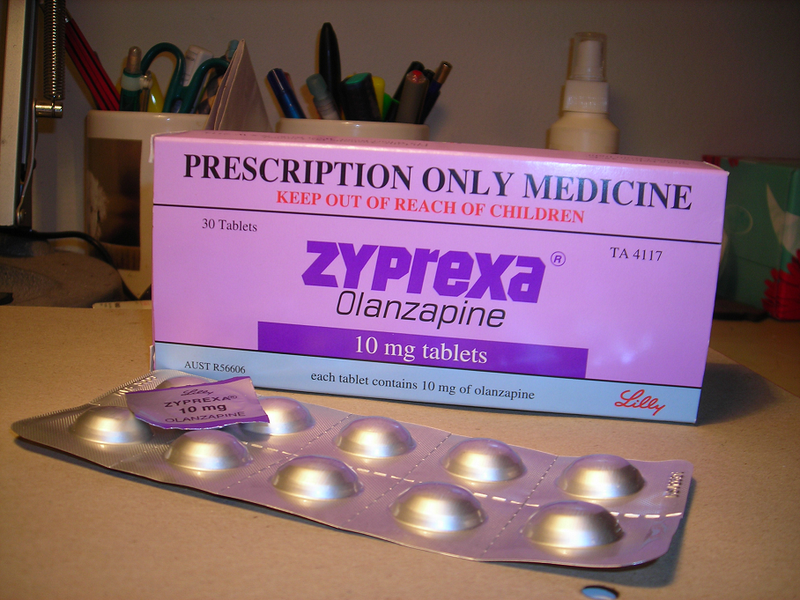 Olanzapine, an example of a second-generation antipsychotic

Anti-depressants are a type of drug which inhibits various pathways and uptake of brain chemicals which are responsible for causing depression.

These drugs can be used in different dosages and in combination with other drugs like antipsychotics depending on the individual requirement and severity of the condition.

However, it is not uncommon to experience a broad range of side effects like nausea, vomiting, weight gain, sexual dysfunction, sleep disturbances, loss of appetite, etc. with the use of these drugs. Therefore, it is highly recommended to weigh the risks versus benefits when prescribing anti-depressants on affected individuals.

Improvement of symptoms will be taken place immediately or take as long as 2 to 4 weeks depending on the severity of the condition and body’s response to the drug. 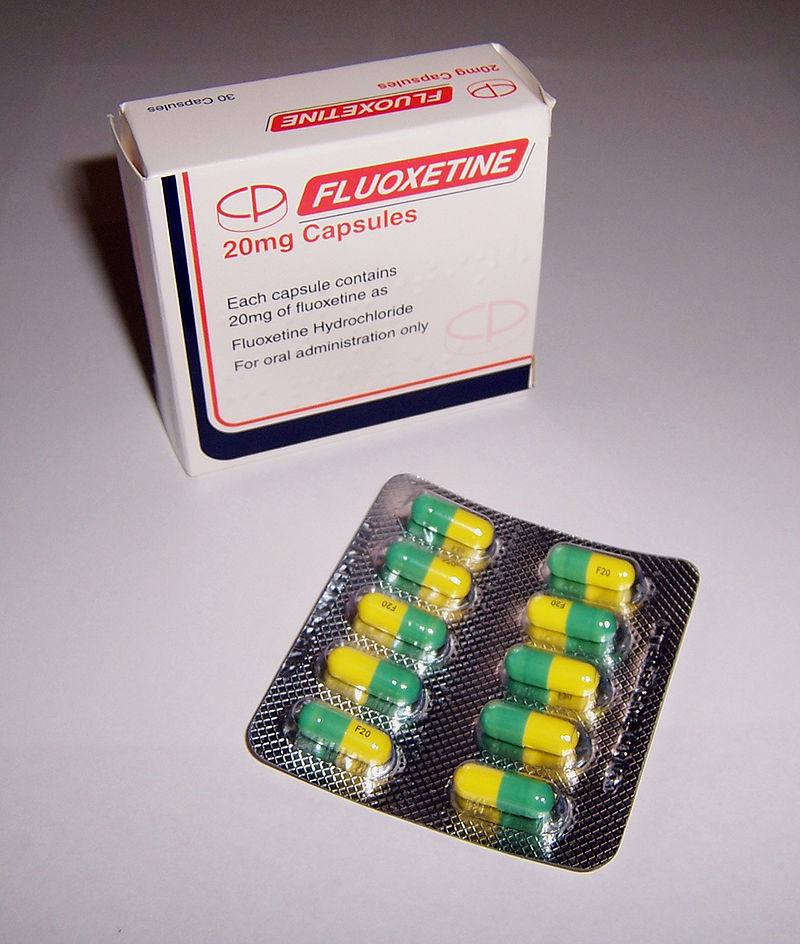 Fluoxetine, an example of an SSRI antidepressant.

Difference Between Antipsychotic and Antidepressant

Antipsychotic: The primary aim of antipsychotics is to control episodes of psychosis characterized by delusions and hallucinations.

Antidepressant: Anti-depressants mainly target uplifting the mood of an individual affected by depression.

Antidepressant: Major anti-depressants (SSRI) mainly aim at increasing the levels of serotonin by inhibiting the serotonin receptors in the brain, resulting in elevated mood, relaxation, and peace.

Antipsychotic: Disorders treated with Anti-depressants can also be treated successfully with Cognitive behavioral therapy and Hypnotherapy.

Antidepressant: Disorders which are treated with antipsychotics are known to be responding only to those; non-pharmaceutical interventions are found to be ineffective.

“Zyprexa” By Raining – Own work (GFDL) via Commons Wikimedia