Boston terrier was developed in the United States in the late 1800s by crossbreeding among English Bulldogs, white English terriers, French bulldogs and a few other breeds. These dogs are often called American Gentlemen owing to their fine manners. This is the first American breed recognized by AKC in the early 1900s. Boston Terriers are among the most popular dog breeds in U.S and are called ‘roundheads’ for their round-shaped skulls. An average adult stands between 15-17 inches at withers and weighs around 7-11 kgs. The round head is more prominent. The muzzle is shortened. The eyes are large, round and dark. They have a short body with strong legs. Unlike other terrier breeds, the tail of this breed is not docked, but it is either straight or warped. The coat is short and smooth and available in brindle, seal or black colors with white markings.

Grooming of Boston terrier is easy. This breed is a great companion owing to their friendly, playful, lovable and non-aggressive behavior. Boston Terriers are also known for their high intelligence and alert and active behavior. They bark loudly when strangers approach. Early training is essential.

French bulldog is a small dog derived from English Bulldogs in France in the late 1800s. The upright bat ears are one of the distinguishing features of French bulldogs. An adult dog stands 10-12 inches tall at withers and weighs less than 12.5 kg. The head is large and square. The shape of their skull is flat between the ears, but domed over the eyes. This shape is also a characteristic feature of this breed. The forehead is domed and the muzzle is very short. Their eyes are dark and moderate in size. The body is compact square conformation with muscling and heavy bone. The prognathic lower jaw has prominent black flews. The tail is short, low set and either screwed or straight. The limbs are straight boned with compact feet and well-knuckled toes. The broad thorax is well noticeable. The flat, very short and glossy coat is brindle, white, brindle and white or fawn. Black, tan and black, white and black color coats are quite rare. 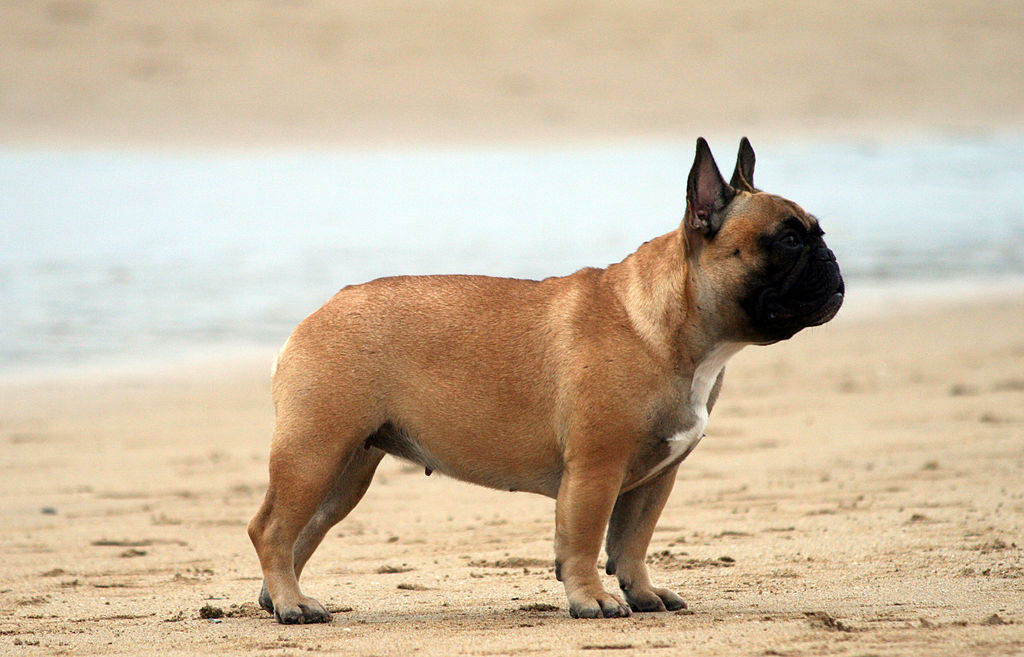 Boston Terrier:  Boston terrier was developed in the U.S from English terriers.

French Bulldog: The skull is flat between the ears, but domed over the eyes.

Boston Terrier: The height at withers is 15-17 inches

French Bulldog: The height at withers is 10-12 inches

Boston Terrier:  The coat is short and smooth, and available in brindle, seal or black colors with white markings.

French Bulldog: The coat is flat, very short and glossy, and available in brindle, white, brindle and white or fawn.

French Bulldog: It is challenging to housetrain them.