Caucasian shepherds/ovchakra have excellent working abilities and a striking appearance. Because of that, these dogs were employed as versatile military dogs in Russia in the late 1960s. Even at present, these dogs are employed as fighting and watch dogs in military units.

This is a huge dog breed with a powerful and muscular body, bear-look face, and low set long tail. The average male dog is about 25.5 inches tall at withers and weighs more than 50 kgs. Females are slightly smaller than males. The wedge- shaped head is prominent. The eyes are dark and deeply set while the ears are round-shaped cropped. The body is very strong and long. Double coat has a dense undercoat. Gray is most common color of the coat. However, other colors including rust, straw, earth, piebald, spotted, and brindle are also seen. The coat is either longer or shorter depending on the living region. The coat is dense and thick and keeps them warm in extremely cold weather. The tail is covered with long and heavy hair. Forelimbs are strong, heavy and straight with large paws. The nose is black and prominent.

This dog breed one of the oldest mastiff-typed breeds. They are extremely aggressive towards any strangers. Hence, proper training and socialization are essential in order to reduce the uncontrollable behavior. However, they are extremely loyal to its owner and family. Hence, these dogs are now popular as companion dogs. Caucasian shepherds are well known for their alert, quick, calm and dominant behaviors. Not only the owner, but everyone who belongs to the family will be protected by this dog breed. It is not recommended to keep kids alone with this dog. This dog breed is not for everyone; they are more suited for people who display strong leadership and are willing to spend a lot of time training and socializing. 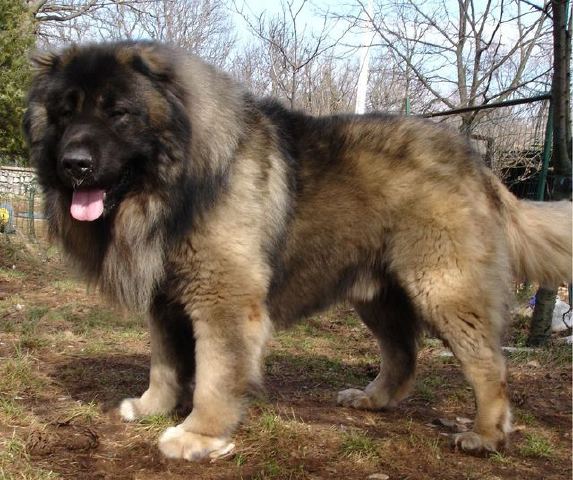 The longevity of this breed is between 10-12 years. Heavy shedding coat needs frequent grooming. The litter size is about 5-12 puppies. Since they are named as working dogs, frequent exercises are vital. Caucasian shepherds /ovchakra are not recommended for apartment life.

The confusion over the two names Caucasian shepherd and Caucasian ovchakra and their usage is explained below.

European people use the term ‘Caucasian shepherd’ for this breed. In Europe, these dogs were first used as patrol dogs to protect the Berlin Wall. However, when the wall came down, the dogs were distributed throughout Germany.

Caucasian ovcharka is the Russian term used for Caucasian shepherd dog. The word ‘ovcharka’ means ‘sheepdog’ in Russian. This dog breed among the most popular dog breeds in Russia and is commonly shown in dog shows.

Caucasian shepherd and Caucasian ovcharka are just two names used by European and Russian people for a single dog breed. Thus, there is no difference between Caucasian shepherd and Caucasian ovchakra. This huge dog was originally bred by Caucasian people as herding dogs. But they are now popular as protective and family dogs. The dogs are well known for their huge and powerful body and for their calm, quick, loyal and dominant behavior.