Comedy and Tragedy are two genres of literature that traces their origins back to the Ancient Greece. In simple terms, the main difference between comedy and tragedy is that the comedy is a humorous story with a happy ending while a tragedy is a serious story with a sad ending. Before moving into analyzing the difference between comedy and tragedy further, let us first look at these genres separately.

What is a Comedy

A comedy can be simply defined as a story with a happy ending that makes the audience laugh. A comedy is a story that illustrates idiosyncrasies of ordinary people, has a happy ending where protagonist achieves his goal at the end. A successful comedy not only has the ability to make the audience happy and amused but can also make the audience understand serious social or individual problems. A Comedy can be categorized into various genres like Farce, Burlesques, Satire, Domestic Comedy, Comedy of Manners, Comedy of errors, etc. Some examples of famous comedies include Shakespeare’s: “As you like it”, “Much ado about nothing”, “A midsummer night’s dream” Moliere’s “The Imaginary Invalid”, “The Miser” 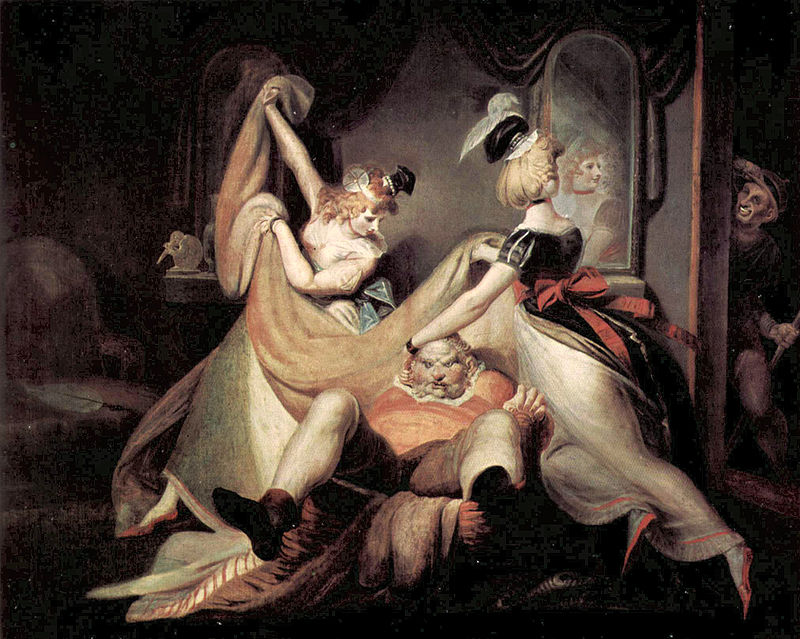 A scene in Shakespeare’s “The Merry Wives of Windsor”

What is a Tragedy

In simple terms, a tragedy is a story with a sad and depressing ending. A tragedy always deals with an extraordinary person who is led to downfall through his own weakness. A successful tragedy has the ability to evoke pity and fear in the audience. In a tragedy, the protagonist’s (who is noble and powerful) life goes from good to bad. Some famous tragedies include Hamlet (Shakespeare), Romeo and Juliet (Shakespeare), The Tragical History of Doctor Faustus (Christopher Marlow) and Le Cid (Corneille)

Difference Between Comedy and Tragedy

Comedy: Characters tend to be ordinary, common: people we meet in everyday life.

Comedy: Protagonist is an ordinary person, but shows a willingness to learn and change.

Tragedy: Protagonist is a member of royalty, a nobleman or a divine being and shows reluctance to change.

Comedy: Protagonist of a comedy is called a comic hero.

Tragedy: Protagonist of a tragedy is called a tragic hero.

Tragedy: Tragedy has a solemn and ominous tone.

Comedy: Conflict in a comedy is often not serious.

Tragedy: Conflict in a tragedy is often very serious.

Comedy: Comedy takes the view that life is ridiculous and people behave in a humorous way.

Tragedy: Tragedy takes the view that life is a misfortune because it is filled with pain and suffering and always inevitably ends in death, loss etc.

Tragedy: Tragedy has a mournful ending.