The English language is one of the most widely and frequently spoken international languages in the world. According to statistical reports, about 1.6 billion people around the world are fluent in English. Due to multiple reasons such as immigration needs, cultural diversity, international scholarships, and business purposes, many students show an interest in mastering English as a foreign language or English as a second language. 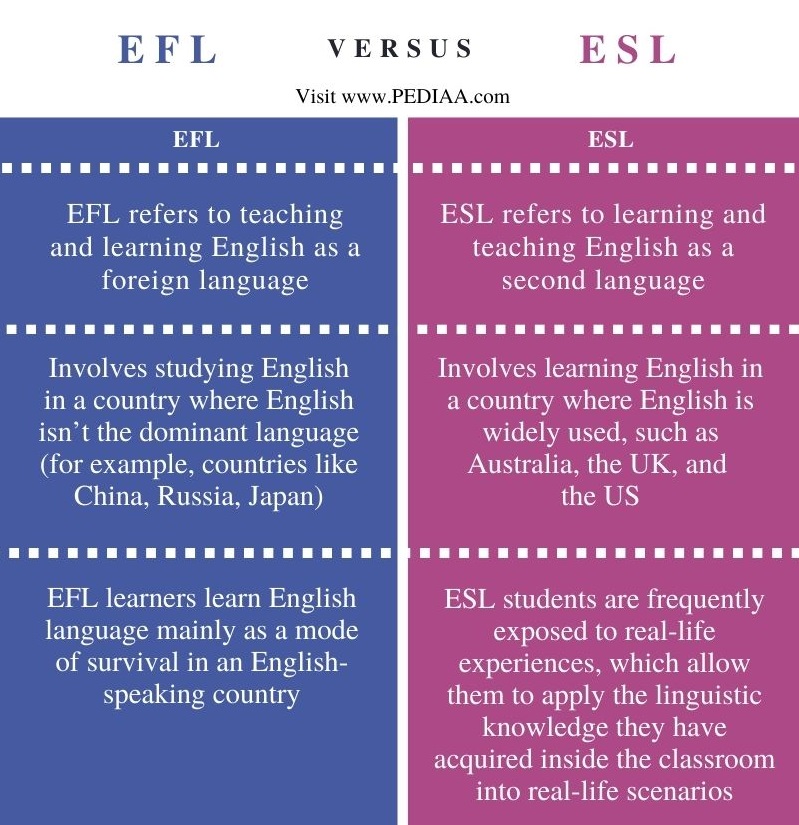 The term EFL refers to learning English as a Foreign Language, inside a country where English is not dominant. For instance, in Japan, English is not considered an official language or a dominant language. Therefore, Japanese students in Japan who learn English are referred to as EFL students. However, if the same group of Japanese students was in the United States of America and if they were taking English courses there, they would not be called EFL students. Instead, we call them ESL students.

The term ESL refers to learning English as a Second Language, residing in a country where the English language is an official language or where English is widely spoken. When you are learning English in a country like Australia, the UK, or the US, you are learning ESL. For instance, students from non-English-speaking countries who migrate to the US or the UK for a long period of time have to learn English as a Second Language. This is also true in the case of children of immigrants. ESL courses are specially designed to offer the learners communication skills in the dominant language used inside the community where they live in.

Similarities Between EFL and ESL

Difference Between EFL and ESL

ESL students are frequently exposed to real-life experiences, which allow them to apply the linguistic knowledge they have acquired inside the classroom into real-life scenarios while they are interacting with colleagues and socializing with locals. On the other hand, EFL learners learn English language mainly as a mode of survival.

The main difference between EFL and ESL is that ESL refers to learning and teaching English as a second language, whereas EFL is teaching and learning English as a foreign language. Whether you are an EFL learner or an ESL learner, it does not matter. English is an official language in so many countries, and it is one of the most common international languages. Learning English would benefit any learner in communication and blend in with the English-speaking communities.

1. Swain, Francine. “What Is ESL: Everything You Need to Know.” FLS Online, 12 June 2020.
2. Dincer, Ali. “EFL Learners’ Beliefs about Speaking English and Being a Good Speaker: A Metaphor Analysis.” HR Pub.org.

1. “English in the countries of the world” By Mahdi.mrabet – Own work (CC BY-SA 3.0) via Commons Wikimedia