In brief, endotoxin, enterotoxin, and exotoxin are three types of toxins produced by pathogenic bacteria. And, they can be either small or large biomolecules capable of causing structural damages or diseases when coming in contact or are absorbed by tissues.

What is an Endotoxin

An endotoxin is a lipopolysaccharide (LPS), which is a kind of large molecule made up of lipid and polysaccharide. Mainly, it occurs on the outer membrane of Gram-negative bacteria. Also, lipooligosaccharides (LOS) are a type of low-molecular-weight form of LPSs. Besides, on the bacterial cell membrane, the endotoxins significantly contribute to the structural integrity, protecting the membrane from chemical attack. Furthermore, they increase the negative charge of the cell membrane, stabilizing the membrane structure. 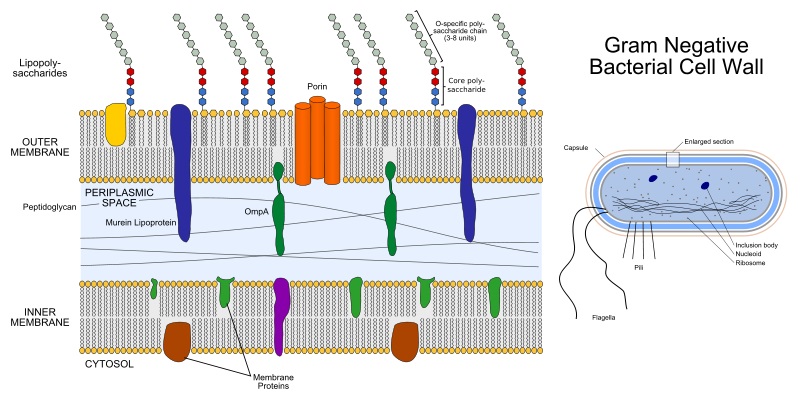 Moreover, endotoxins comprise three parts; O-antigen/O-polysaccharide, core oligosaccharide, and lipid A. Of these, O-antigen is a repetitive glycan polymer, which attaches to the core oligosaccharide, to form the extracellular domain of the endotoxin. Meanwhile, the core domain comprises either an oligosaccharide or non-carbohydrate component, directly attaching to the lipid A. And, lipid A is usually a phosphorylated glucosamine disaccharide decorated with multiple fatty acids. Basically, it attaches the endotoxin to the bacterial membrane through the hydrophobic fatty acid chains of lipid A.

What is an Exotoxin

Exotoxin is a type of secretory protein of Gram-positive bacteria and some Gram-negative bacteria. It can cause damage to the host cells by disrupting the normal metabolism of the cell or by directly destroying the cells. Therefore, they are highly toxic and immunogenic. Also, their symptoms are lethal. Some examples of exotoxins include the botulinum toxin produced by Clostridium botulinum, diphtheria toxin produced by Corynebacterium diphtheriae toxin, and tetanospasmin produced by Clostridium tetani.  And, all of the three toxins are neurotoxins. 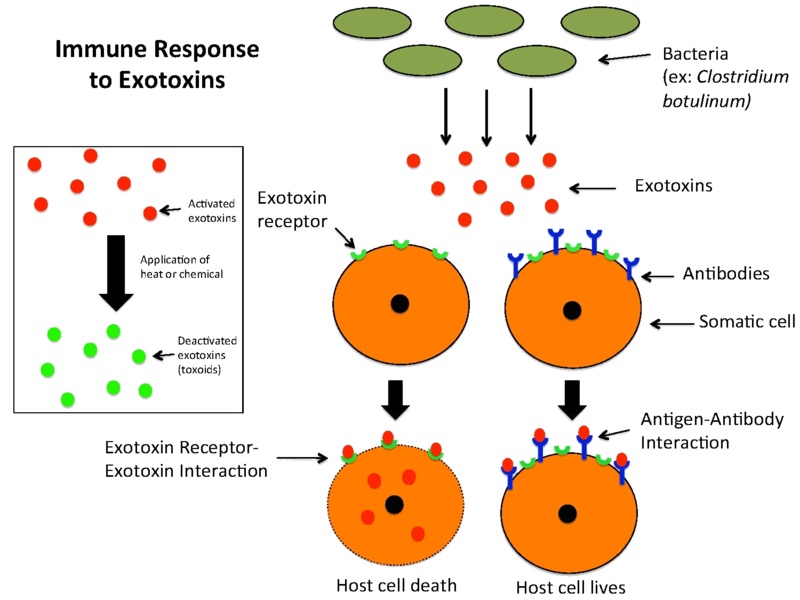 Moreover, exotoxins are heat liable, and therefore, they can be destroyed by heat. Also, the production of toxoid through chemical treatment is another method of destruction. In this method, the toxoid is the chemically-modified form of the toxin, being no longer toxic but, still antigenic. Therefore, it is important as a vaccine in active immunity. In addition to that, exotoxins are susceptible to antibodies, and hence, the immune system of the body can mount an immune response against them. Thus, in the passive immunity, antitoxin or the anti-serum with antibodies can be injected.

What is an Enterotoxin

Enterotoxin is also a type of exotoxin. It, especially, targets the intestines. Also, enterotoxins can be encoded either chromosomally or in plasmids. Besides, they are heat stable and are secreted to the outside of several bacteria, including Staphylococcus aureus, Bacillus cereus, and Vibrio cholera. Furthermore, they have a low-molecular-weight and are water-soluble. Importantly, enterotoxins are cytotoxic and hence, they kill epithelial cells in the intestinal wall by altering the apical membrane permeability. Thereby, they are mostly pore-forming toxins (mostly chloride pores), which assemble to form pores in cell membranes, causing cell death.

Moreover, this pore formation increases the chloride permeability, leaking chloride ions to the lumen of the intestine. Consequently, this increases the movement of sodium ions and water into the lumen, leading to secretory diarrhoea within a few hours of ingesting enterotoxins. For example,  staphylococcal food poisoning and Bacillus cereus diarrheal disease are two common forms of diseases caused by enterotoxins. In addition to these, abdominal cramps, diarrhoea, vomiting, loss of appetite, fever, and nausea are the symptoms of food poisoning, and these symptoms can be life-threatening if not treated.

Similarities Between Endotoxin Enterotoxin and Exotoxin

Difference Between Endotoxin Enterotoxin and Exotoxin

Endotoxin is a lipopolysaccharide, and enterotoxin is a type of exotoxin, while exotoxin is a protein.

Endotoxins occur in the outer membrane of the Gram-negative bacteria, but mainly, Gram-positive bacteria produce enterotoxins and exotoxins.

Endotoxins are an integral part of the outer cell membrane, but enterotoxins and exotoxins are a type of secretory proteins into the surroundings.

Endotoxins and enterotoxins are heat stable, but exotoxins are destroyed rapidly at 60 °C.

Endotoxins are weakly immunogenic, but enterotoxins and exotoxins are highly antigenic.

Endotoxin is a lipopolysaccharide, occurring on the outer membrane of pathogenic bacteria. Although heat stable, they are weakly immunogenic and moderately toxic. Also, they are pyrogenic. Meanwhile, enterotoxins are a type of exotoxins effective in the intestine and cause food poisoning and diarrhea. They are also heat stable. Exotoxins are proteins of which pathogenic bacteria secrete to their surroundings. And, they are highly antigenic and highly toxic. Hence, they can produce life-threatening symptoms such as tetanus, diphtheria, and botulism. On that account, the main difference between endotoxin, enterotoxin, and exotoxin is their occurrence, immunogenicity, and toxicity.