What is a Homophone

The term homophone is derived from Greek ‘homo’ meaning same and ‘phone’ meaning sound. A homophone is a word that has the same sound as another word but has a different meaning. The spelling of the words might not differ in certain cases. For example, there is no spelling difference in the two words rose (flower) and rose (past tense of ‘rise’). Some other examples of homophones include,

There, they’re and their

Though homophones can create problems in understanding the meaning of a sentence, it is not difficult to understand the true meaning if you pay attention to the context in which these words are used. For example, look at the two sentences,

He wanted to write a short story.

Turn right from there.

What is a Homonym

The term homonym is derived from Greek ‘homo’ meaning same and ‘onym’ meaning name. A homonym refers to two or more words having the same spelling or pronunciation but different meanings and origins. A homonym can be a

Word that is spelled like another word, but has a different meaning  (homograph)

bear (animal) and bear (to support)

Word that is pronounced like another word, but has a different spelling and meaning (homophone)

Word that is spelled and pronounced like another word, but has a different meaning and origins.

By now, it should be clear to you that homonym can refer to a homograph, homophone or a combination of the both. However, keep in mind that there is a view that a word has to have both spelling and pronunciation to be termed as a homonym. Such words are not very common. Some examples include pole (long, slender, rounded piece of wood or metal) and Pole (location), desert (to abandon) and desert (arid region) and left (direction) and left (past tense of ‘leave’)

He left home when he was eighteen years old.

His left leg was shorter than the right leg.

He started screaming when he couldn’t bear the pain anymore.

The little kid had only seen a bear in the circus.

What is the Difference Between Homophones and Homonyms

Homophone refers to words that have the same pronunciation, but different meaning.

Homonym refers to two or more words having the same spelling or pronunciation but different meanings and origins.

Some examples for homophones include meat and meet, road and rode, see and sea.

Some examples for homonyms include bear, coach and leave. 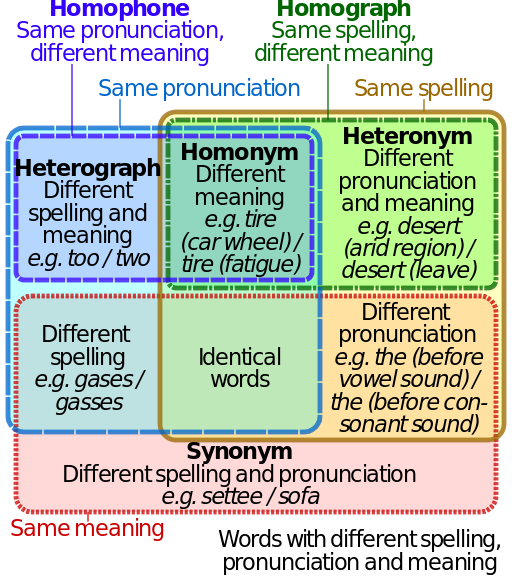