Although the two names, past tense and past participle, sound similar, there is a distinct difference between them. Past tense is one of the major three tenses in the English language, whereas past participle is a verb form.

Past Tense, Past Participle 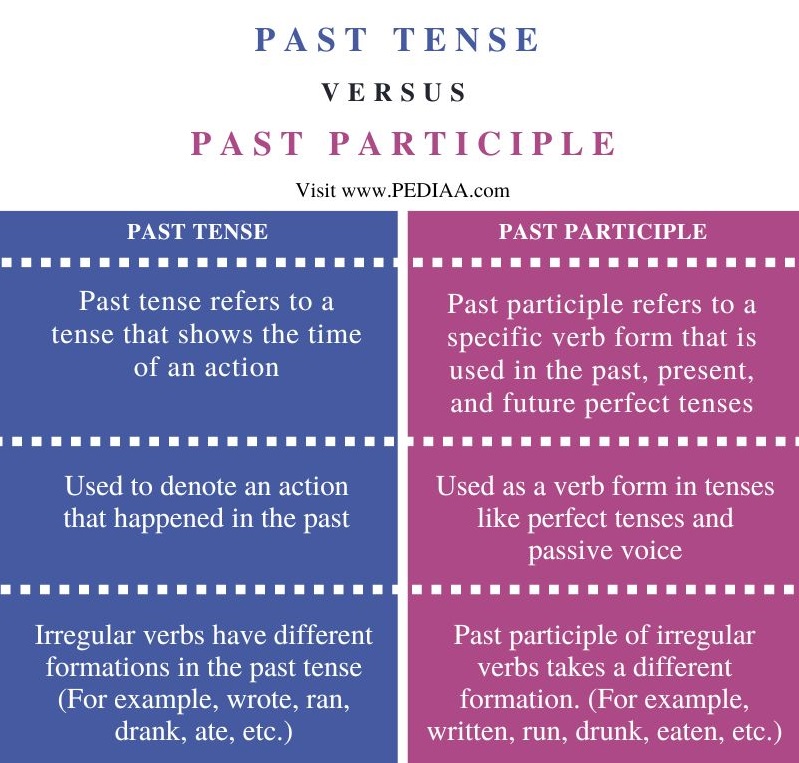 What is Past Tense

Past tense is a tense we use to describe the actions that happened in the past or past state of being. For example, in the sentence “she ate apples,” the action happened in the past. At the same time, the sentence “she was happy” is considered a past state of being. The tense of action can be determined by using the verb. There are three main tenses as present tense, past tense, and future tense. The formation of the verbs in the tenses shows the tense.

What is Past Participle

Past participle is an infinite verb form that has characteristics of both a verb and an adjective. Past participles are used when forming passive voices. For example,  we can convert the active voice sentence “the boy kicks the ball” into passive voice by using its past participle form as “the ball is kicked by the boy.”

Similarities Between Past Tense and Past Participle

Difference Between Past Tense and Past Participle

Past tense refers to a tense that shows the time of an action, while past participle refers to a specific verb form that is used in the past, present, and future perfect tenses.

Past tense is used to denote an action that happened in the past, whereas past participle is used as a verb form in tenses like perfect tenses and passive voice.

1. “Was, Were – Grammar Structure for Verb To Be in Past Simple” By Goose friend – Own work (CC0) via Commons Wikimedia