Cereal is an actual grass, primarily cultivated for the edible starch components of its grain. Botanically, this grain is a type of fruit known as a caryopsis, and it contains three parts such as the endosperm, germ, and bran. It belongs to the monocot family Poaceae and is grown in larger quantities and provides more food energy and carbohydrate for the entire world than any other type of crop. Maize is a commonly consumed cereals in the world and is considered as a staple crop. They are a rich source of macronutrients (carbohydrates, fats, oils, and protein) and micronutrients (vitamins, minerals) as well as bioactive phytochemicals (polyphenols, flavonoids, anthocyanin, carotenoids, etc.). However, maize is also known as corn in some parts of the world; many people are often confused about these two terms. The word “corn” is primarily used in North American English whereas the word “maize” is primarily used in British English. This is the main difference between maize and corn, and this article explores the differences between corn and maize.

What is Maize or Corn

Maize (Zea mays) is a cereal grain, and it is most preferred cereal in the world. It is also known as corn in some English-speaking countries. This cereal is cultivated on more land area than any other commercial food crops. Worldwide, maize is the leading source of protein in the human diet, having a higher protein than other major cereals such as wheat or rice. Scientific classification of maize is as follows;

Uses of Corn or Maize:

Dent, flint, pod, popcorn, flour, and sweet corn are some of the main types or forms of maize.

Corn flour is used as a thickening ingredient

Sugar-rich varieties are known as sweet corn, and they are frequently harvested immaturely at milk stage for human consumption as kernels.

Popcorn is a special variety of corn. Boiled or baked immature corn or popcorn is popular snacks among children and adults

The multicolored flint corn is used as a garnish or for decoration. 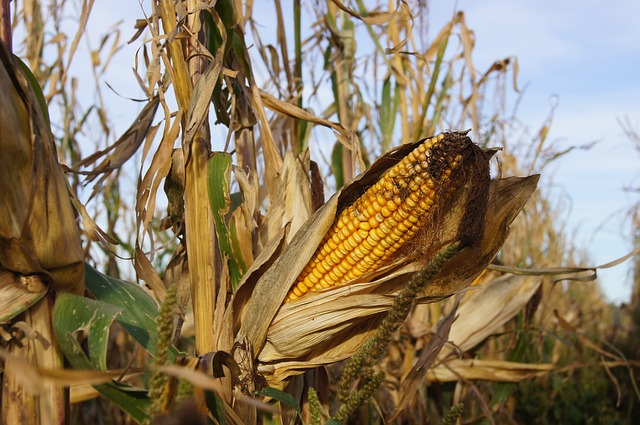 Difference Between Maize and Corn

Corn and maize terms may have substantially different applications. These differences may include,

Maize is a Central American cereal plant which yields large grains set in rows on a cob. The many varieties include some used for stock feed and corn oil.

Corn is the chief cereal crop of a district, especially (in England) wheat or (in Scotland) oats. Synonyms are grain,  cereal, and cereal crop.

The word maize originates from the Spanish. When Columbus’ voyage made landfall in 1492, they reached some island in the San Salvador. The island was inhabited by Tahino people, in whose language the name for their main crop was “mahis” meaning “source of life.” It was a large grain set in rows on a cob, and the Spanish took samples of this giant grain with them and distributed the crop. That word has been communicated into today’s “maize” in English.

In the United States, Canada, Australia, and New Zealand, corn principally refer to maize. Except these countries, the word “corn” refers to any cereal crop or refers to their local staple. Mainly, English speakers use the word corn to whatever the predominant grain in their region. For example, corn in England means they are talking about or referring to wheat.

The term maize is mainly used in formal, scientific, and international applications because it refers exactly to Z. mays, unlike corn. In addition, the term maize is used by agricultural bodies and research institutes such as the FAO and CSIRO.

Corn is not a preferred term in formal, scientific, and international applications.

The term maize (Z. mays) refer to what you yield from the field.

The term corn (Z. mays) refer to the food in your plate.

In conclusion, corn or maize is one of the world’s more favored staple food. They are major diets component because of this plant’s agronomic adaptability and offers easiness of grain storage and easiness of converting grain into flour for making edible, palatable, interesting and satisfying foods. Furthermore, maize is one of the most important sources of carbohydrate and protein in a majority of countries. 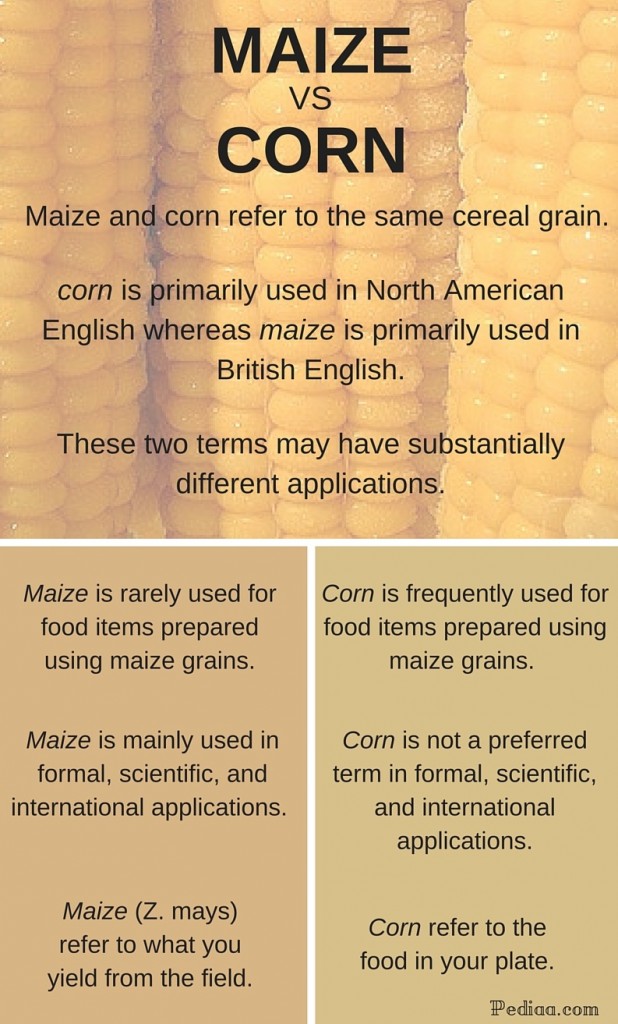