Melatonin and melanin are two substances found in living organisms. Most of the time people confuse melanin with melatonin due to the similar pronunciation. However, these are two different molecules associated with completely different functions in the human body. Melanin is a pigment responsible for skin color whereas melatonin is a hormone responsible for the biological clock of the human body. This is the main difference between Melanin and Melatonin. Let’s discuss this difference further.

Melanin is an indolic polymer synthesized using the amino acid Tyrosine, and it is the major pigment of the skin, hair, pigmented tissue underlying the iris of the eye and the wall beyond inner ear (stria vascularis). There are three types of melanin, namely eumelanin (common type), pheomelanin, and neuromelanin. Melanin is biosynthesized and stored in cells called melanocytes, origin of which is the neural crest of the embryo and then migrate to many other sites of the vertebrate body. Melanocytes are mainly found in the basal layer of the human skin (epidermis and underlying dermis) and give the skin its color. Melanin is stored inside granules in the cytoplasm of the melanocytes and appears as dark blobs.

The major function of the melanin (and melanocytes), is to provide the protection from ultraviolet (UV) radiation for the skin and underlying organs. The ability of the pigment to absorb UV radiation is 99%. So the people with darker skin color are less prone to skin cancer than people with lighter skin color. 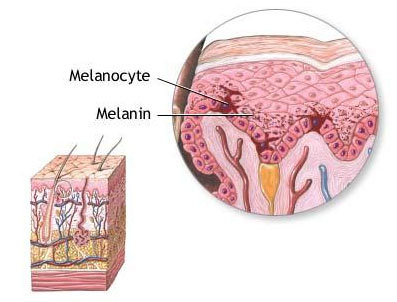 As mentioned earlier, melatonin (N-acetyl-5-methoxytryptamine) is a hormone that is secreted from the pineal gland of the human (and animal) brain. It is biosynthesized using the amino acid Tryptophan as the precursor. Melatonin was first discovered after feeding cow pineal gland extract to tadpoles, and skin color of tadpoles were brightened as a result of contracting dark melanophores. The main functions of melatonin are regulating the sleeping and waking cycle (circadian rhythm), blood pressure, and seasonal breeding in animals. In plants, it functions as regulation of responses to photoperiod, defensive strategies during harsh environmental conditions, and as an antioxidant.

When the daylight is fading away in the afternoon, melatonin production starts. Then after the sunset, melatonin kicks in. Then we feel sleepiness, and ultimately we sleep. However, when we are under a blue light, melatonin is suppressed, causing irregular sleeping patterns. So, it is advisable not to use cellphones and laptops at least half an hour before the sleep. 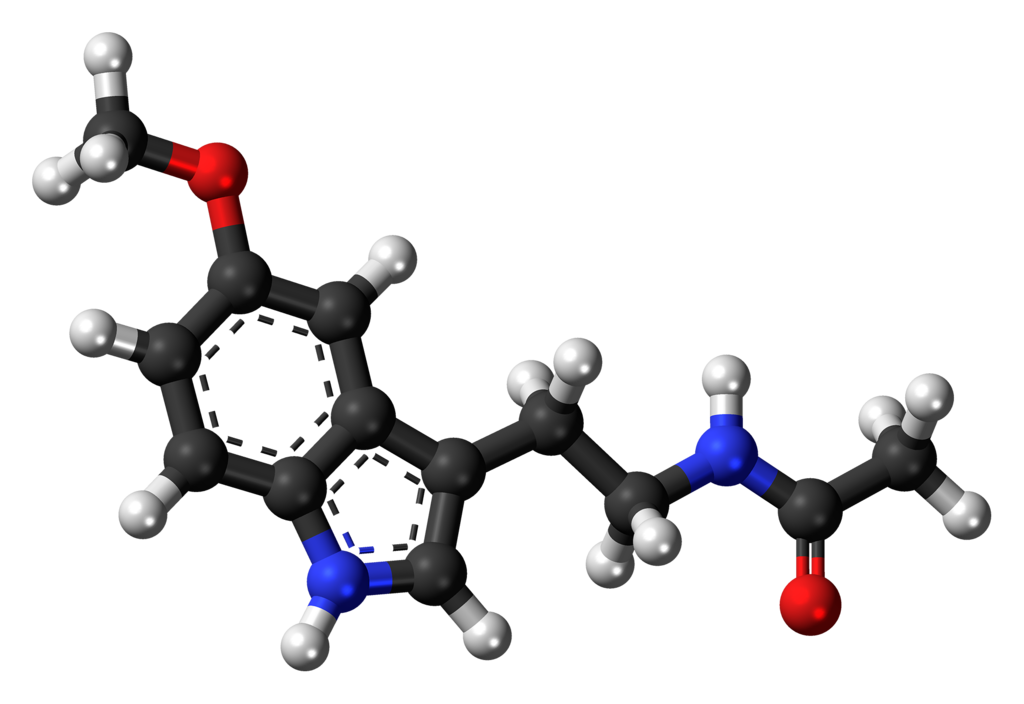 Melatonin is prescribed as a drug for insomnia. Treatment may be long term or short term depending on the condition the patient has. Other useful properties of melatonin include reduction of anxiety, preventive treatment for migraines, evidence to cure cancers, protection of gallbladder, protection from radiation, vivid dreaming, etc.

Difference Between Melanin and Melatonin

Melatonin and melanin are two types of compounds found in the body, and both compounds are synthesized using amino acids as the precursor.

Melatonin is a hormone.

Melanin is a pigment.

Melatonin uses tryptophan as the precursor.

Melatonin is a small molecule.

Melanin is a polymer.

Melatonin is synthesized in different tissues of the body.

Melanin is synthesized in melanocytes.

Melatonin is stored and released from the pineal gland to the blood stream.

Melanin is stored in melanocytes, and no such release occurs.

Melatonin is responsible for circadian rhythm.

Melanin is responsible for protection from UV radiation. 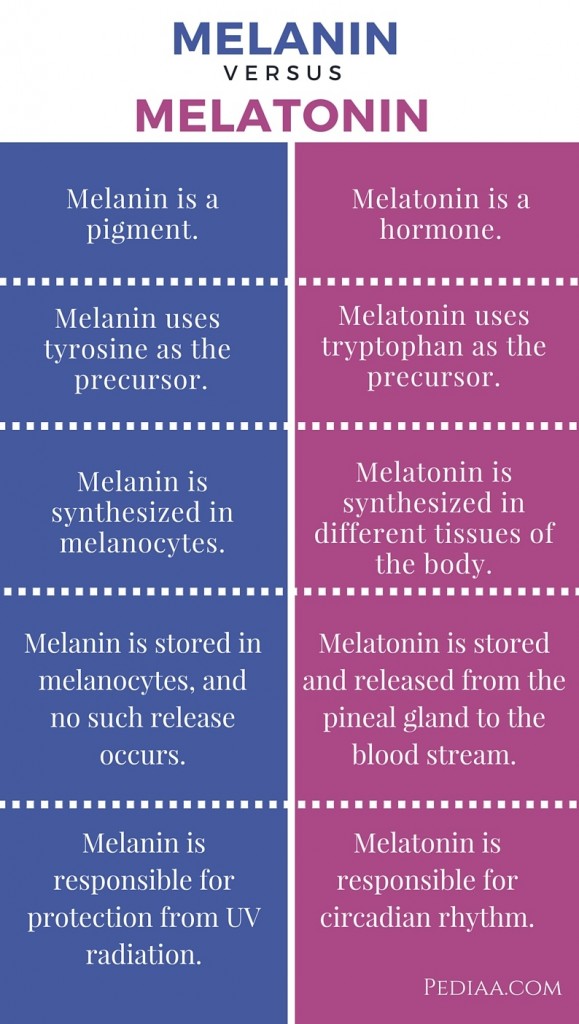