Hormone and enzyme are two substances produced by plants and animals, which help to regulate various functions in the body. Hormones can be either proteins or steroids. Enzymes are mainly proteins. Both hormones and enzymes are released by glands in animals. Hormones are chemicals but enzymes are biological catalysts. The main difference between hormone and enzyme is that hormone carries messages to other parts of the body, triggering a specific cellular reaction in target tissues and organs whereas enzyme is a biological catalyst, which increases the rate of a specific biochemical reaction without undergoing any changes.

What is a Hormone

A hormone is a product of living cells, which circulates in fluids like blood or sap, and produces a specific, usually stimulatory effect on the activity of cells, remote from its point of origin. Synthetic substances can also react as hormones. Thus, hormones are chemical messengers, which aid one part of a body to communicate with the other part of the body by sending signals. In animals, they are directly released into the bloodstream by endocrine glands and circulate through the body until the target tissue or organ is found. Some of the endocrine glands in the body and their hormones are shown in Table 1.

Table 1: Endocrine glands and their hormones

The initial contact of a hormone with a specific cell or tissue may start important reactions such as prompting a cell or tissue growth and development, initiating and maintaining sexual development and reproduction, helping the food metabolism, controlling the body temperature, regulating mood, and cognitive functioning. Different types of hormones are secreted from the body, with different biological functions. Hormones can be polypeptides, amines, terpenoids, steroids, or phenolic compounds. Since hormones are extremely powerful molecules, a few hormones may have a major effect on the body. Hormones are destroyed after their action. Therefore, they cannot be reused. Different classes of hormones are shown in figure 1.

An enzyme is a protein molecule which acts as a biological catalyst, regulating the rate of biochemical reaction. It does not alter its structure during the action; hence, it is reusable. All aspects of metabolism in cells are catalyzed by enzymes. Large nutrient molecules like carbohydrates, proteins, and lipids are broken down into small molecules, transforming chemical energy into other cellular processes like the formation of macromolecules, starting from their precursor molecule. All enzymes except ribozymes are proteins. The amino acid sequence of the polypeptide chain determines the structure of the protein, which is essential for their action. The structure of the protein varies with temperature or pH. Once denatured, enzymes irreversibly lose their ability to catalyze reactions. Additional chemical components like cofactors are required by the action of an enzyme. These cofactors can be either coenzymes like vitamins or prosthetic groups like metal ions. An enzyme with its active site is shown in figure 2. 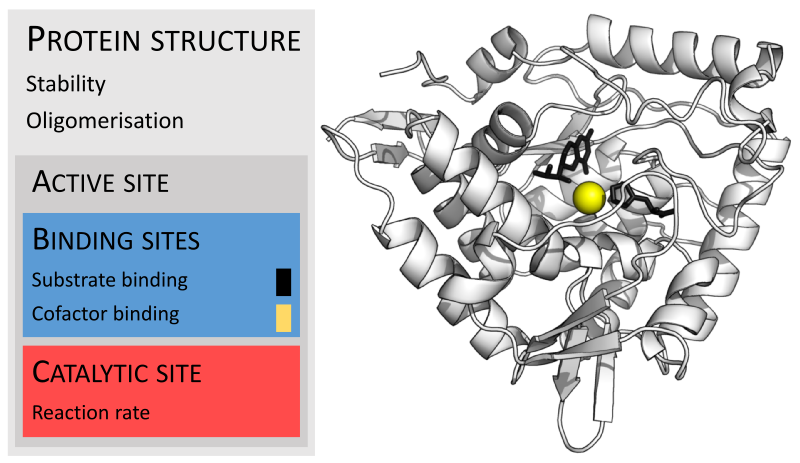 Figure 2: Structure of an enzyme

Since enzymes can be used over and over again, only a small quantity of enzyme is required to catalyze a reaction. The action of enzymes can be mainly regulated by allosteric control. Inherited human diseases like phenylketonuria and albinism are caused due to a deficiency of an enzyme.

Enzymes also have industrial applications like fermenting of wine, leavening of bread, brewing of beer, and curdling of cheese. In medicine, enzymes are used in diagnosing diseases, promoting wound healing, and killing pathogenic microorganisms.

Difference Between Hormone and Enzyme

Hormone: Hormone is a regulatory substance which is produced in an organism and transported in tissue fluids like blood or sap, stimulating specific cells or tissues into action.

Enzyme: Enzyme is a substance which is produced by an organism and is capable of catalyzing a specific biochemical reaction.

In Plants and Animals:

Enzyme: Enzymes are proteins, which may contain metallic groups. The exception is ribozymes which are RNA with catalytic activity.

Hormone: Hormones have no prosthetic groups.

Diffusion through the Cell Membrane

Hormone: Hormones are diffusible through the cell membrane.

Enzyme: Enzymes are non-diffusible through the cell membrane.

Hormone: Hormones are signals which pass between cells or organs.

Enzyme: Enzymes catalyze chemical reactions by increasing the rate of the reaction.

Hormone: Hormones are damaged during the process; hence, they cannot be reused.

Enzyme: Enzymes do not change after their function.

Hormone: Hormones are regulated by brain or external factors.

Effect of Temperature and pH

Hormone: Hormones are not affected by temperature and pH.

Enzyme: Enzymes are affected by temperature and pH.

Enzyme: Enzymes have unique but essential functions in the body.

Hormone: Oxytocin, cortisol, testosterone, and estrogen in animals and abscisic acid, cytokines, and gibberellins in plants are the examples of hormones.

Enzyme: Hydrolases, oxidases, and isomerase are the examples of enzymes.

Hormone: Hormones are produced and secreted by endocrine glands.

Enzyme: Enzymes are produced and secreted by exocrine glands.

Hormone: Hormones are transported by the blood to the site of action.

Enzyme: Enzymes act either at the site of formation or a nearby organ.

Hormone: The function of hormones depends on positive and negative feedback reactions.

Enzyme: The function of enzymes depends on the presence of substrate.

Hormone: Excess or reduced levels of hormones cause diseases.

Enzyme: Enzymes cause diseases due to insufficiency.

Enzyme: Enzymes work depending on the signals of hormones.

Enzyme: Enzymes do not change with age.

Hormone and enzyme are two substances, which are produced in plants and animals and capable of catalyzing chemical reactions. Hormones are small chemicals which have a different site of action, other than the site of origination. They are produced and secreted by endocrine glands and circulate in fluids like blood or sap, transmitting chemical signals throughout the body. Hence, different tissues and organs communicate by hormones. Enzymes are protein molecules which catalyze biochemical reactions occurring in the body. They are produced at the site of action. Enzymes tend to alter their structure in unfavorable temperature and pH conditions. However, the main difference between hormone and enzyme is in their mechanism of action inside the body.