What is Amino Acid

Amino acids are the basic building blocks of all the proteins in our body. May it be a hormone, an enzyme, a structural protein like keratin, all of these are made up of amino acids. Amino acids polymerize to produce proteins. Since every amino acid has a basic –NH2 end and an acidic –COOH end, these terminals react with each other making a chain of amino acids which is called a polypeptide. A polypeptide may contain a variety of amino acids. Depending on the order of amino acids also known as the amino acid sequence, proteins may differ from each other. The sequencing is of utmost importance because it determines whether the protein functions properly or not.

Amino acids do not polymerize randomly. This process is highly regulated. The code of each protein is stored in a DNA sequence which is first transcripted to a m-RNA sequence (in higher organisms DNA is spliced before converting to m-RNA where the unwanted DNA sequences lying in between genes are removed ) and then m- RNA is translated into an amino acid sequence.

If we consider DNA as a four letter alphabet and it can make three letter words, these three letter words are called Codons. Each of these codons stands for a particular amino acid. Therefore, if a DNA sequence or m-RNA sequence is provided we may be able to predict the amino acid sequence. The real issue is since DNA is a linear array of information we should have some rules to start and stop at the right position.

• STEP 1  – Know which DNA strand is given. There are two strands: Coding strand or non-coding strand.

One can either read the coding strand from 3’ to 5’ or read the template strand from 5’ to 3’ when making the corresponding m-RNA strand.

We can see that we achieve the same sequence irrespective of the strand used.

• STEP 3 – Convert m-RNA as a sequence of codons. ALWAYS start from the codon AUG and NEVER count the same nucleotide twice!

• STEP 4 – Use the below table to find the relevant amino acid sequence.

Also remember,
a. Start codon AUG stands for Methionine.
b. If you come across a stop codon UAA, UGA, UAG you should stop sequencing.

Check if you end up with the answer shown below: 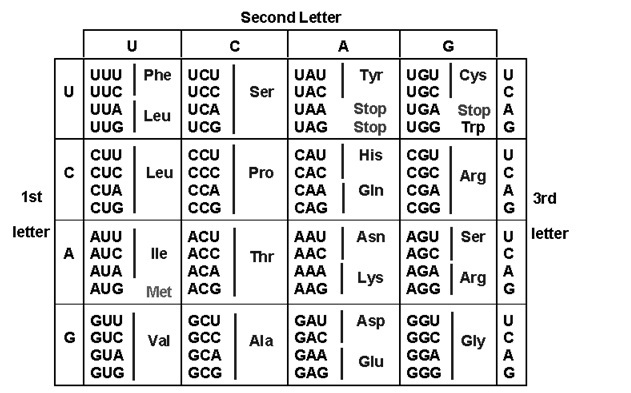 About the Author: Koshal